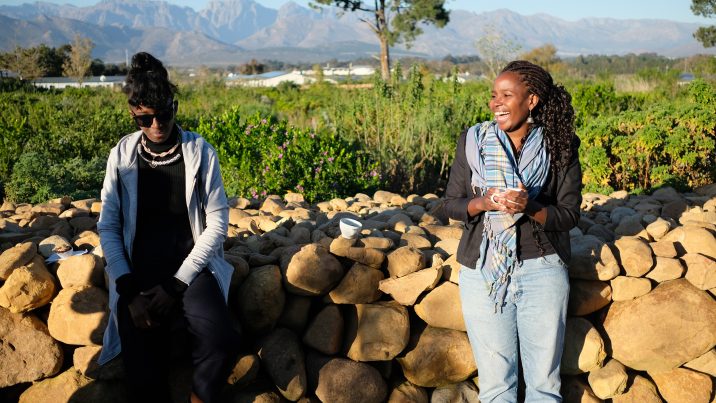 Kadandara participated in Electric South’s 2017 New Dimensions Lab, which aims to teach artists based in Africa how to produce immersive media. The Lab includes hands-on training, as well as access to mentorship throughout the project, and assistance funding and distributing VR projects.

Immersive Shooter spent some time with Kadandara to learn about her latest project and talk about Electric South’s mission to amplify the voices of African artists working in the immersive media space.

How did you first get into virtual reality?

How did you come across Electric South?

I literally Googled ‘opportunities VR Africa’ and saw the lab they were having in July of 2017. Applications were open to any artist or creative from a wide range of disciplines, so I applied and submitted a concept of something I’d like to work on.

Was that concept the story about Lake Chad that you’re currently working on?

Originally, I wanted to do something on Kenya’s elections, but that didn’t work out because it was such a time-sensitive story. A lot of my ideas back then were time-sensitive, so I decided to prepare something a bit different. I started looking into doing a project in Chad about the Sudanese refugees when I learned about how the area around Lake Chad had been suffering in terms of resources and safety. It had shrunk to 10 percent of its original size! People have covered the story, but I wanted to do it in a way that the lake has a voice and shares what is happening from her perspective.

Going to the lab was a really helpful way to break down my stories into tiny pieces and build them back up with the help of a mentor. You get to the point where you really know how to defend your story. It gets you thinking about the process of developing VR stories.

I stayed with the same idea throughout the week, but it was much more refined, there was more logic to what the characters represent, and I was more aware of tools, like Unity, that I could use to make my story more interactive.

For example, the narration will serve as the voice of the lake, and she will introduce you to new characters and concepts. I’m still debating on how much the lake should know, in terms of what’s happening to her. There are still some questions I’m trying to answer.

What is your timeline for the piece?

I’ve already done my first trip to the lake and found good characters that can illustrate what’s happening. I needed to go to the region to see what it looked like and what footage I could get. Going to Chad was quite expensive because getting to the lake area is not easy to access, but I received a grant from Electric South, which was significant in making this possible.

I’m planning to go back in September and will be finishing post production in November.

What advice from the workshop has been most valuable to you for this project?

One valuable bit of advice was about post production and how the workflow is pretty important. You can’t wing it like you might in traditional documentary. You have to be a lot more thoughtful about your shots.

What camera(s) are you using for the project?

I’m using the Kandao Obsidian R, from BlackRhino VR. They do mostly commercials in VR, but they’re looking to do some creative documentaries as well. They came on as a co-producer, let me use their camera, and will be doing most of the post production work. They’re working on the trailer now.

What advice do you have for people new to VR and/or 360 video production?

The easiest way to learn things, I’ve found, is to get out and just start doing it. Even if it’s not for professional purposes. When I started experimenting with the Nikon Keymission 360 and the GoPro Rize 7. I had to go through a lot of experiments that didn’t yield any stories, but gave me insight on how the cameras work and some best practices.

I would also say people shouldn’t be afraid to reach out to other people in the industry. One of the mentors at the lab last year said, ‘Always remember that we’re supposed to be VR gurus, but we’ve only had about two years of experience in this medium.’ Anyone can experiment in this new medium and become a guru.

What preconceived notions did you discover were wrong about producing immersive media?

It is complicated, but it’s not rocket science. If you just sit down with it, you can create a lot of things.

Be sure to check out our interview with Electric South Producer Caitlin Robinson, where she shares her strategies for VR funding and distribution, and the importance of making this emerging medium accessible for all.