Last month, the September 2017 issue of W magazine hit newsstands–with a twist. In partnership with VFX studio The Mill and photographer and artist Steven Klein, W magazine used augmented reality to bring its cover to life.

Scanning images and pages from the magazine, which are marked with an AR-activated W icon, from within the app, leads to multi-dimensional visuals. For example, readers are encouraged to interact with different parts of Katy Perry’s cover portrait, as each facial feature unlocks a new piece of content.

To see some of the experience for yourself, download W’s Beyond the Page app. The app is free to download on iPhone and Android, and can be used in conjunction with the magazine or photos online here.

Immersive Shooter chatted with W Magazine’s Editor-in-Chief Stefano Tonchi and Pierce Gibson, senior designer for The Mill, to talk about 3D scanning, VFX for AR and how AR can be incorporated into and promoted within traditional platforms.

What made you decide to incorporate augmented reality into the September cover?

W is known for experimenting and taking risks. For September, the magazine always taps guest creative collaborators – from legendary art director Terry Jones in September 2016, to The Mill, for this special collector’s issue in September 2017. The futuristic visuals and stories in the issue, Katy Perry’s message of freedom and self-expression, along with the themes that are conveyed throughout the issue (the idea of providing an escape, facilitating a sense of discovery, transcending the page) certainly lend themselves to AR. (Tonchi) 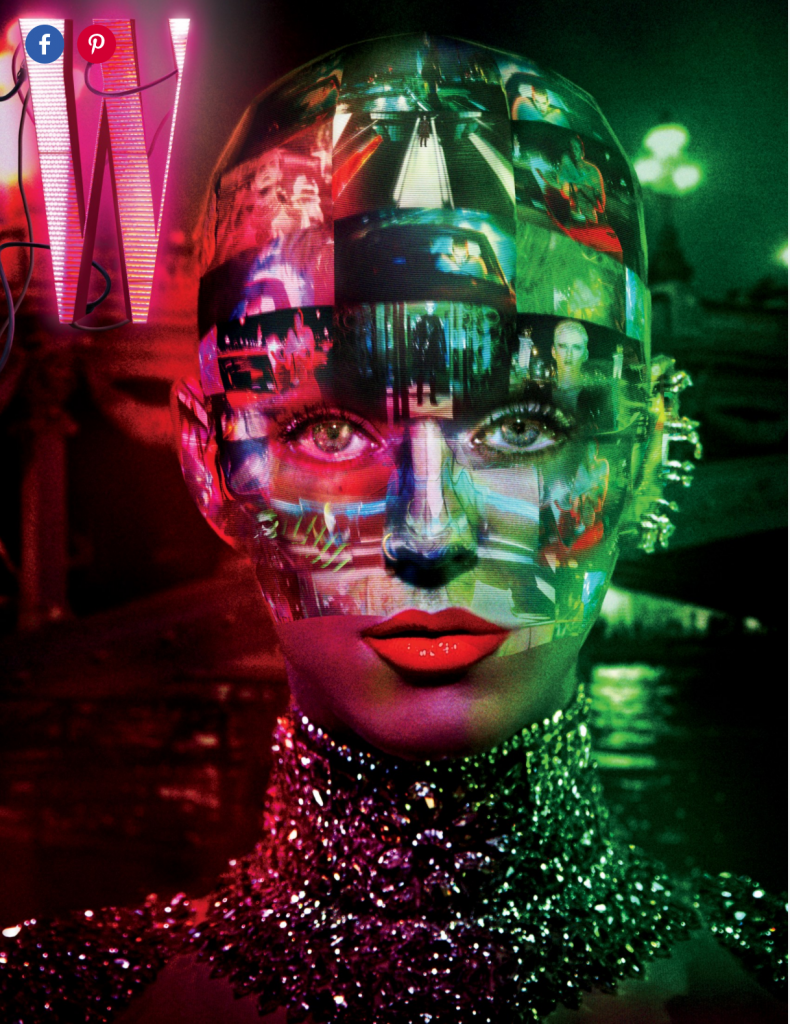 The cover of W Magazine’s September issue is a trigger for an interactive AR experience through W’s Beyond the Page app.

What was the inspiration behind this particular AR experience?

The AR experience was specifically designed around W’s September collector’s issue, which includes futuristic stories – from Steven Klein’s cover story starring Katy Perry, to a collaboration with artist Alex Israel, accompanied by a short piece of science fiction. The starting point was to create an immersive and tactile experience that enhances this collectible issue and builds on its themes (“Discover,” “Escape,” “Defy,” “Transcend,” “Rebel” – also the titles of some of the features in the issue). (Tonchi)

Unlike some AR projects we’ve done in the past,  the ask to create a digital component for the September Issue of W enabled us to to begin thinking along different lines that generating one piece of content in a vacuum. The idea of  generating a creative through-line for the reader throughout the issue, one that would provide a seamless experience between the app and the printed page was really compelling to us. (Gibson)

I know you utilized 3-D scanning technology to produce virtual portraits. What equipment did you use to achieve this effect?

Often 3D scanning is intended to capture the likeness of the subject, the ask on our end required a great deal more information to do justice to the look and feel . We needed information for hair, makeup, jewelry and wardrobe to help us create a one-to-one, dimensional version of what we’d photographed on set. For this we used hand held scanning as well as photogrammetryThe use of photography to survey and map a location from a variety of angles. for color and lighting reference. (Gibson) 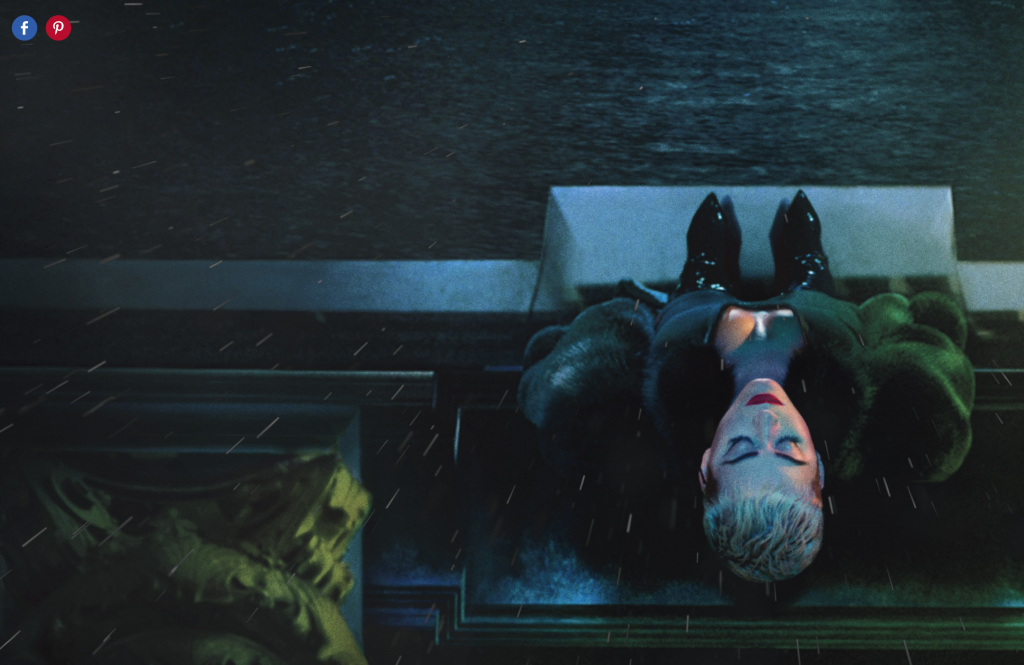 The VFX for the cover videos are very cool. What applications were used to achieve this look?

Capturing the 3D component of the head was kind of 1st step of the process. Steven was really keen on the idea of using his own imagery and materials and literally reshaping these moving images into a living, motion sculpture in the likeness of Katy. The foundation of our decisions was the thought that this sculpture could exist in real life. We wanted to have a tactile, tangible quality and looked to alot of real world examples to build our ideas out of. Old TV Screens, video sculptures, and practical lighting effects were referenced along the way.

After each individual scene was designed and composited within Flame and After Effects each scene was then placed on the head, representing this sort of Augmented reality second skin for the sculpture which we ultimately achieved through Z Brush, Cinema 4D and Maya.

Another portion of the project was a panoramic 360-degree view of the cinematic set. What camera did you use to capture this part of the experience?

One significant challenge for AR experiences is the need to often download a new app, in this case, W Beyond the Page. What was the deciding factor in creating a specific AR app, versus incorporating it into your existing app, utilizing WebVR, or some other solution? What did you gain by using this approach? What did you lose?

It was very important for W to takeIndividual instance of a shot; a take = each time the camera is started and stopped. a step forward in creating something that uniquely suited to them and their voice, allowing for a one of kind platform for them to be able to share their content. Being very easy to access and download initiate a gateway and a first step into adding new dimensions to their voice. (Gibson)

Given the nature and scale of this project, and as the AR experience was specifically created around the September 2017 collector’s issue, we knew we needed a bespoke solution in order to bring this experience to life. The app helped us achieve better integration, seamlessness, and a cohesive look and feel. (Tonchi)

It’s sometimes maddening to convey just how cool AR/VR/MR experiences are in a flat space. How did you promote the experience in traditional formats?

The Mill produced a series of videos illustrating the AR experience and showcasing the app, and W has used this content across its digital and social platforms. In print, the magazine includes a guest collaborator letter from The Mill, discussing this project; the cover features a sticker with a call to action to download the app, and the pages of the magazine include an AR icon and information describing how to unlock content through the app. (Tonchi)

As has proven the case with any of our AR projects so far, we’re always up against the boundaries of technology and pushing against that line to tell our stories. Remaining as familiar as possible with both the drawbacks as well as advantages is really the only way forward in being able to build an informed creative to start from.

As far as the advantages, moving forward, depth perception, surface recognition with mobile technology is already proving to have exciting results, and even more so in next several years. (Gibson)

How else has W Magazine incorporated 360 video, VR, AR or MR into its brand in the past? And, what is the next big project?

This is W’s first AR project, but we are always looking to experiment with new platforms and emerging technology. (Tonchi)