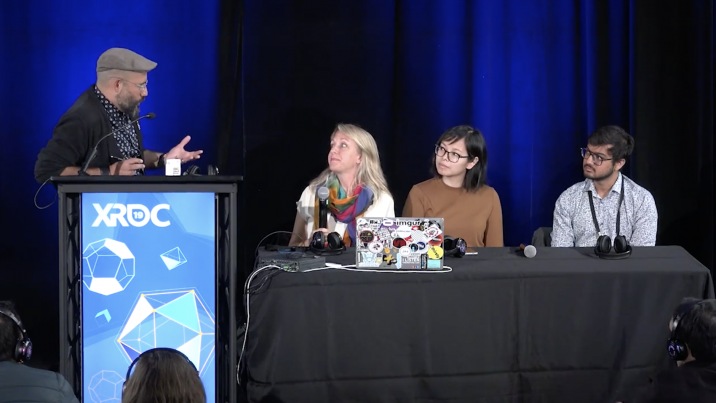 At a recent AR workshop, a participant asked the instructor if he knew of any AR Journalism examples. The instructor, who was teaching a quick intro to Apple’s Reality Composer platform, said he didn’t know of any.

I don’t blame him. His focus is on immersive tech and many in that field, or in others like gaming, don’t realize the work journalists have been doing for some time.

That was the theme of the session I organized for XRDC (XRAll of immersive media encompassing VR, AR, MR and beyond. Developers Conference) in San Francisco a few weeks back. Recruiting colleagues in the immersive journalism field, we formed a panel that was able to showcase some of our work.

Joining me on stage were Marcelle Hopkins, co-director of immersive journalism at The New York Times currently on a Knight Fellowship at Stanford; Elite Truong, deputy editor for strategic initiatives at The Washington Post; and Chaitanya Shah, creative technologist at Emblematic Group and USC JOVRNALISM alum.

As moderator, I presented first to explain the session title, Augmenting Journalism by Hijacking a Dancing Hot Dog, which is about how my JOVRNALISM students and I used Snapchat’s Len Studio. We replaced the infamous hot dog with, well, more meaningful content to create AR experiences on homelessness, undocumented migrants and more.

We recently published a tutorial to empower others to produce similar projects on Immersive Shooter.

The New York Times has been a leader in XRAll of immersive media encompassing VR, AR, MR and beyond. projects, implementing the technology to tell stories ranging from the Olympics to wild fires. (Among their first pieces is still my favorite: David Bowie costumes in AR.)

Hopkins, next to present, showcased the Syrian chemical attack project, that recreated a scene and lets users explore their investigation in AR.

This project is an incredible example of how investigative journalism from the other side of the world could be brought into your living room to help better understand an issue.

Truong followed up with The Washington Post’s use of AR to give users a close look five space suits that reflect the 50-years of spaceflight. The AR spacesuits began popping up on a variety of locations making for interesting photo ops.

Like The Times, The Post has released different XRAll of immersive media encompassing VR, AR, MR and beyond. projects over the years, ranging from an AR look at the National Museum of African American History and Culture in DC to two UNESCO World Heritage sites.

Last one up with Shah, the JOVRNALISM alum that developed our Lens Studio experiences and who is now working at Nonny de la Peña’s Emblematic Group. He spoke about Reach, their new browser-based platform that enables users to create XRAll of immersive media encompassing VR, AR, MR and beyond. experiences via a browser.

This technology is a significant step forward to help more storytellers pivot to XRAll of immersive media encompassing VR, AR, MR and beyond..

We then wrapped up our session by having a Q&A that discussed the challenges of bringing this new type of technology into traditional newsrooms, and how these bring new ethical questions.

You can watch the panel here: If you ever hear someone ask for AR/XR Journalism examples, not only can you show them some listed above, but perhaps you can show them your own.

Have other XRAll of immersive media encompassing VR, AR, MR and beyond. Journalism projects? List more examples in the comments or tweet them at me (@webjournalist).