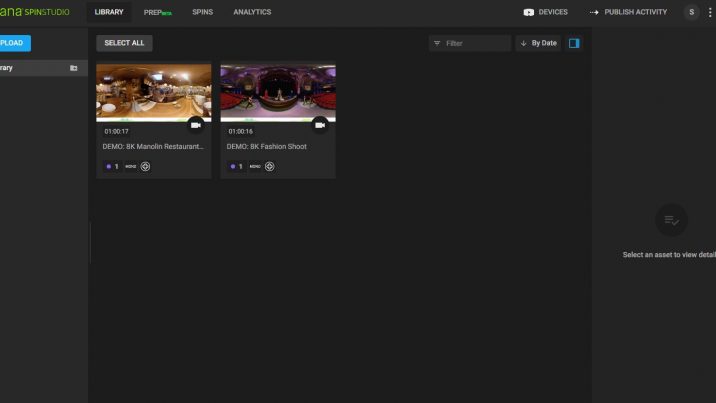 Pixvana has announced the full release of SPIN Studio, its end-to-end VR platform for editing, creating and sharing VR video.

With SPIN Studio, users will also be able to build interactive story experiences from within a VR headset. While wearing an Oculus Rift headset, creators can place media and build their experience in a WYSIWYG interface. In addition to building branching narratives and adding interactive hotspots and gaze-activated hotspot actions, creators can also sequence linear stories from within the Rift headset.

“We are bringing to market the first complete set of cloud-based VR tools, with the capability of creating and editing in a virtual environment, making it easier than ever to build immersive VR experiences,” said Forest Key, Co-Founder and CEO of Pixvana.

SPIN Studio also includes its own stitching tool that renders masters in the cloud at resolutions of 8K and beyond. According to Pixvana’s press release, the company uses a computational grid to render output, which reduces the time it takes to stitch immersive media by half compared to a high-performance desktop application.

“8K is the future. With it comes incredible benefits, but the sheer volume of data still poses challenges,” said Jason Paul, general manager of Gaming Software and Virtual Reality at NVIDIA. “With NVIDIA’s VRWorks 360 SDK, the SPIN Studio solution for rendering 8K in the cloud simplifies the workflow, making 8K more accessible to many content creators.”

SPIN Studio also comes with Pixvana’s VR Casting tools to securely share content at high resolutions. The content can be shared to a paired headset, streamed simultaneously to multiple headsets for events and classes, or send with a private sharing key to a client for review.

“Pixvana recognized the pain in managing VR video production early on,” said Paul Lundahl, Co-Founder and Creative Director of Emotion Studios, a Bay Area creative agency focused on digital storytelling. “They focused on the hard problems and developed a bulletproof technology stack, all in the cloud, with tools that are effortless to understand and use. Pixvana has built a platform that is indispensable for the production of our VR films.”

SPIN Studio is currently available as a free trial for 30 days or to power a user’s first project. After the free trial, annual subscriptions range from $1,000 to $10,000 based on use cases, streaming, storage and other factors.

Through the Pixvana Education program, global partners, including colleges and universities, non-profits and charities, libraries and labs, museums and other centers for art, can receive a two year license to multiple SPIN Studio accounts for free.