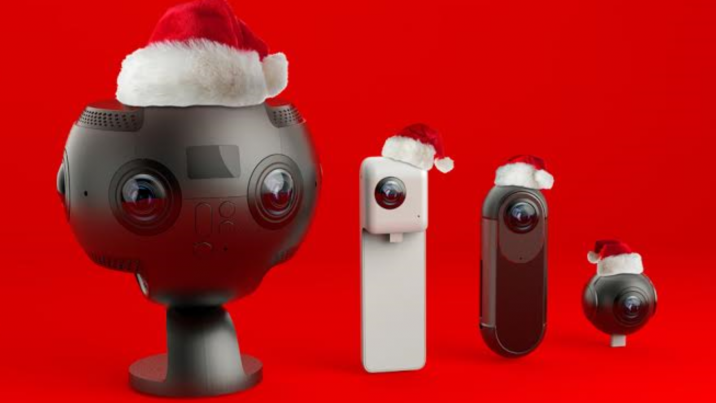 Happy Thanksgiving to all of our readers in the U.S. And, to everyone, worldwide, happy Black Friday!

We’ve been hearing news of deals on 360 cameras and gear all week, so we’ve started this post that we hope will grow over the next few days as we hear about more deals.

If you spot a great deal, email me at sarah@immersiveshooter.com so we can share the good news with everyone. After all, you don’t want to get coal in your stockings, come Christmas!

If you buy a Moza Guru360 gimbal on Black Friday, you’ll get a free MC-1 charger with your purchase (no code necessary). This is the gimbal I use for just about everything I shoot on consumer 360 cameras. You can read our review of it in full here.

They’ve also got deals on their Moza Air gimbal for DSLRs to get 50 percent off a gimbal bag using the code ‘gimbalbag’ and 20 percent off Somita tripods with the code ‘tripod’. 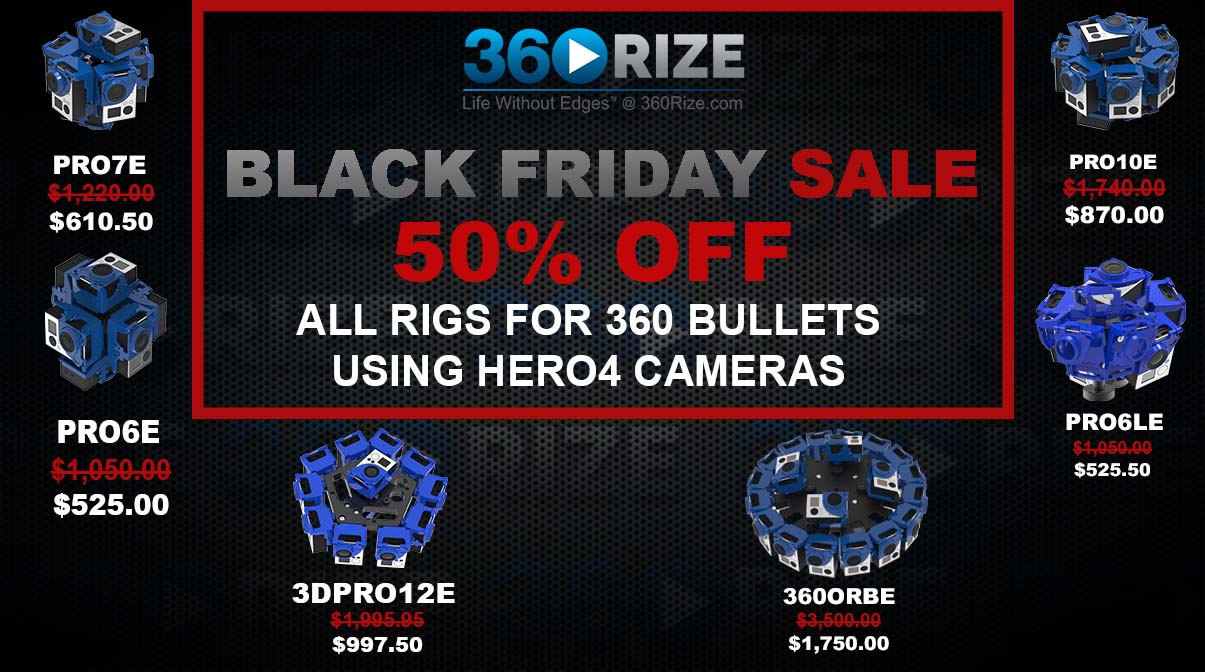 360Rize is running a half-off deal on all of its 360 Bullet rigs for GoPro Hero4 cameras. The Bullet lineup can sync multiple GoPros at up to 120fps within +/- 5 frames. It also triggers a buzzer for an audio sync backup.

Get $20 off Google’s Daydream View during this weekend’s festivities. Originally priced at $99, the headsets will be $79 (including the Daydream controller). 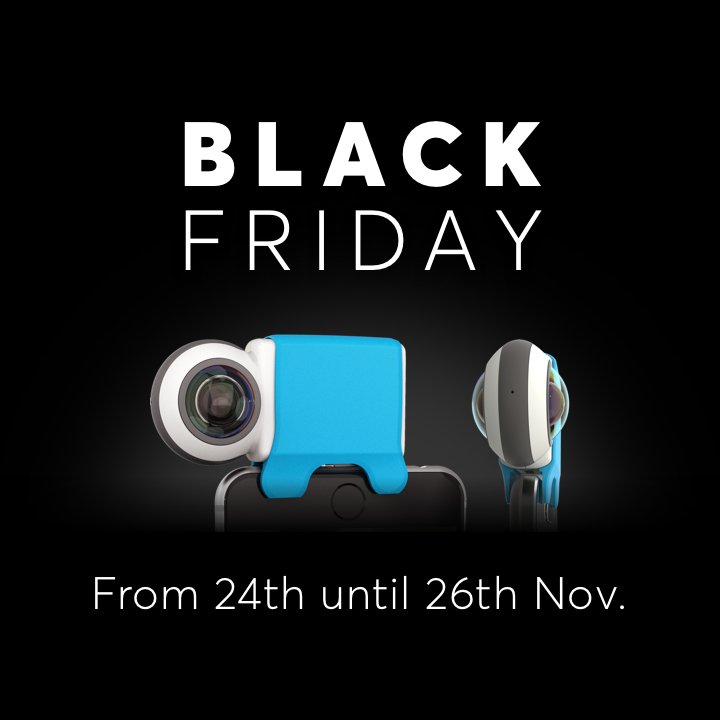 Although no specific deals have been specified (other than a Twitter cover image saying “save up to 50 percent”), Giroptic iO will be offering deals on its 360 cameras for Android and iOS from November 24 to 26. Visit them on Twitter to learn more.

The HTC Vive’s current MSRP is $600, and though we haven’t spotted any deals to get it for less, there are a number of retailers offering a free Deluxe Audio strap ($100 value) and free copies of Fallout 4 VR (a $60 value, launching Dec. 12) and Tilt Brush (a $20 value). Retailers offering this deal include Amazon, Microsoft, Best Buy, HTC (with a $50 Steam gift card), Newegg (save $25 when you pay with MasterPass) and Gamestop (which is also offering a $50 Gamestop gift card in the deal). 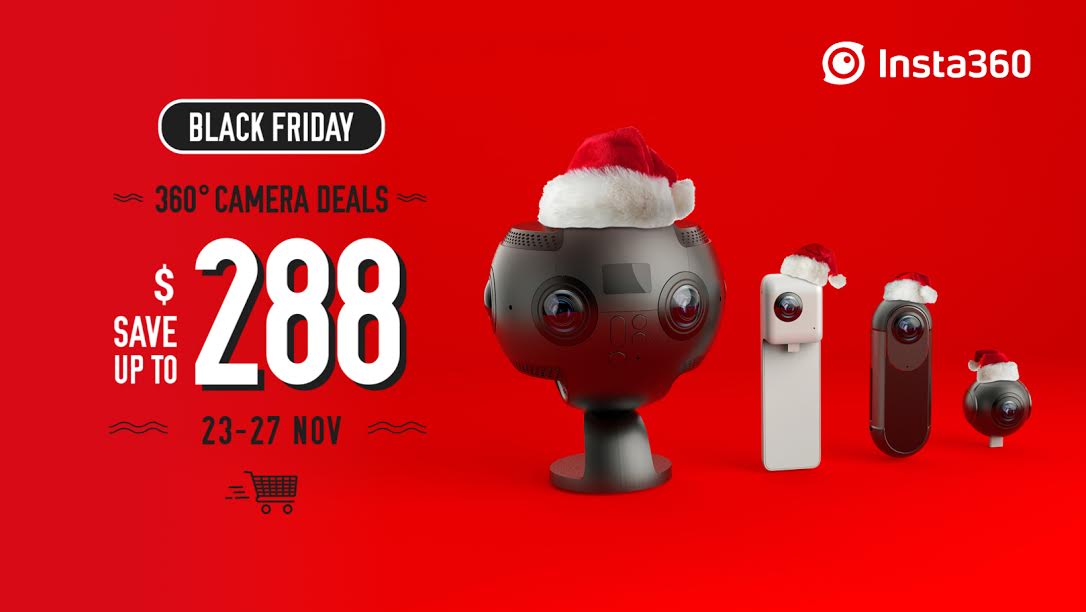 Insta360 has announced deals on its Air, Nano, ONE and Pro cameras for Black Friday.

There are also deals on packages including accessories, from D cards to selfie sticks, to extra batteries. Below is the full list of deals.

The deals begin on Thanksgiving, Thursday, Nov. 23 at 6 p.m. EST and end Monday, Nov. 27, at 11:59 p.m. EST. The deals are valid on cameras purchased from Insta360’s online store and its official Amazon stores in the U.S., U.K., Germany, France, Italy, Spain and Japan (Officially listed here: ONE, Nano, Air, Pro).

This Black Friday, you can get the Oculus Rift for cheaper than ever before: just $350 for the Rift bundle. The bundle includes the headset, two sensors, a pair of Touch controllers and a bunch of free apps.

The deal will be available directly from Oculus, as well as through retailers including Amazon, Best Buy, the Microsoft Store, and Newegg in the U.S. and Canada, plus Amazon, Dixons, Currys PC World, MediaMarkt, and Overclockers UK in Europe.

Get a Playstation VR headset and the PS4 camera for $250 this Black Friday. An extra $50 gets you a copy of Gran Turismo Sport, and another $100 gets you a pair of Move controllers and Skyrim. You can get the deal right now on Amazon. 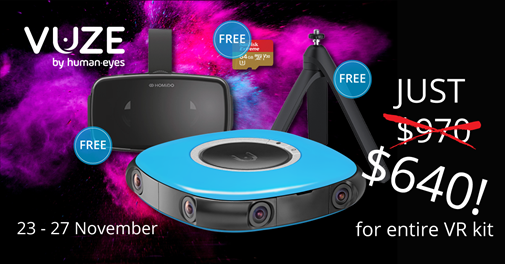 Humaneyes, creator of the Vuze camera, will be offering a Black Friday deal all weekend on its 4K 360-degree stereoscopicVideo shot with two parallel cameras (or in the case of 360° video, multiple pairs of parallel cameras) Commonly referr... More camera. Get the Vuze camera, a mini tripod, the omido 2 headset and a 64GB micro SD card for $640. The camera is regularly $800. There’s no promo code necessary, but you will need to buy through the Vuze website.

We’ll be adding more deals as we spot them from now through early next week (Cyber Monday, anyone?).

If you love Immersive Shooter, consider supporting us by utilizing our affiliate links at no additional cost to you.