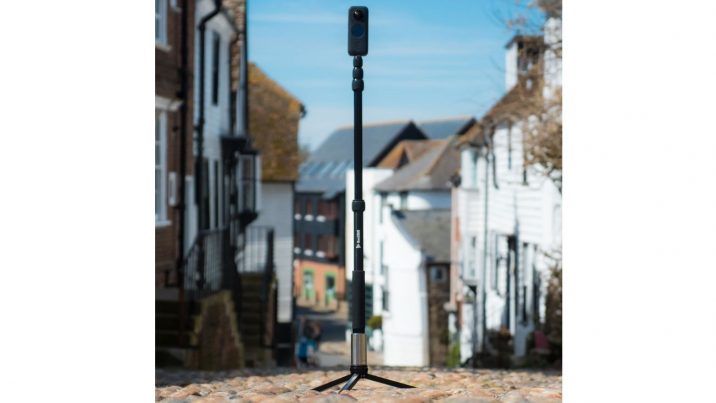 The Best360 Monopod Aluminium Edition is a highly stable monopod made specifically for use with 360 cameras by Shanil Kawol, video creator and trainer with Best360.

“The Best360 monopod is tall enough to record videos at eye level, thin enough to be invisible in the stitch line, modular so it can be carried around in a small bag and it has a wide base for stability,” Kawol said. “And, it has a hefty counterweight to reduce the chance of your 360 camera getting blown over by the wind.”

Kawol, who lost his first 360 camera (a Samsung Gear 260) back in 2017 when a gust of wind knocked over the light stand he’d been using for a tripod, knows firsthand the importance of a high quality monopod. “I’m not the only victim of 360 cameras getting blown over by the wind,” he said. “It’s actually the number one way newbies break their 360 camera.”

So, he decided to make the monopod he wished he had from day one.

Stability is not only integral to keeping one’s 360 camera safe, it’s also important for viewers. “When you watch 360 video in a VR headset, small camera movements in real life will feel big in a headset,” Kawol said. This can cause nausea. “It’s important to keep your 360 camera as still and smooth as possible.”

A counterweight can also be used to make carrying the Best360 monopod as a selfie stick more comfortable, by counter-balancing the weight of the camera at the end of the monopod.

Invisible in the Stitch

Although traditional tripods offer great stability, they create a large footprint in the nadirThe bottom of the sphere. of the 360 video that can takeIndividual instance of a shot; a take = each time the camera is started and stopped. a long time to remove during editing. That was also a consideration Kawol made when designing the Best360 monopod. The monopod has removable tripod legs at the base.

“By pushing away the tripod legs from the 360 camera, the size of the footprint in the nadirThe bottom of the sphere. becomes smaller,” he said. “Then, it’s easier to remove the tripod legs and shadow in editing.”

The modular monopod breaks down into three parts for maximum portability, and each module has rubber anti-slip pads to connect securely and seamlessly. At 38.5 cm long, the aluminum alloy selfie stick is the largest part of the modular monopod, enabling all pieces to fit easily within one small bag.

“I love travel vlogging with my 360 camera, but I hate carrying lots of camera equipment,” Kawol said. The Best360 monopod is designed for flexibility and creativity in the field. He can use the selfie stick solo for walking around with his camera or attach it to the tripod legs and counterweight for static shots.

The selfie stick weighs only 267 grams, the legs, 251 grams; the entire monopod together weighs barely more than 1 kilogram.

The selfie stick extends to a maximum of 150 cm for versatility in capturing virtual tours, travel vlogging, and filmmaking. Additionally, the tripod legs can be adjusted to any height. With the tripod legs in their widest position, the entire monopod has a maximum height of 164 cm; with the legs in their narrowest position, the maximum height is 174 cm.

The Best360 monopod bundle includes the three modules listed above and a hex key, plus a magnetic camera mount and 10 cm spacer to mount 360 cameras to any magnetic surface, from car hoods to safety rails. The magnet has a pull force of 45 kilograms and is covered in rubber to prevent damage to surfaces.

Kawol, who often captures his road trips with a 360 camera mounted to his car, wanted to feel more assured that his camera would be safe while driving. “I would always have the fear that the suction mount would lose suction on during my journey,” he said. The magnet he designed is so strong that it is difficult to remove from the car with your bare hands; instead, you need to use a ‘lever’ to detach it.

Ultimately, Kawol said, Best360 wants to help people spend less time worrying about the safety of their precious 360 camera so they can spend more time having fun filming.

When you buy something using the retail links in our articles, Immersive Shooter may earn a small commission at no additional cost to you. Immersive Shooter does not accept money for gear reviews and we only recommend products we ourselves use and believe are of high quality.