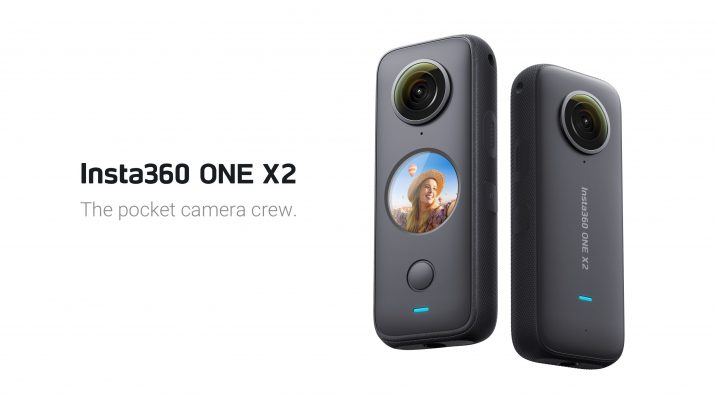 New to the camera are a high-def touchscreen display for shot preview, IPX8 waterproofing and a number of shooting modes:

Insta360 has also announced the Insta360 app’s Shot Lab, which contains various one-tap templates to crop your 360 shots into various cinematic effects, including Dolly Zoom and Stop Motion. The Clone Trail and Shadow Clone templates quickly clone your body and Ghost Town removes people from your 360 timelapse so you can export an unobstructed photo.

Like the Insta360 One and One X, the One X2 also has an invisible selfie stick to enable users to capture aerial angles without a drone. And, the latest iteration of the camera continues to offer TimeShift hyperlapse, though Insta360 has extended this feature to Steady Cam shots in addition to reframed 360 shots, and Freeze Frame, to slow the video down and reframe the shot “at the height of the action.”

Users can also track any subject with a tap or voice command, while shooting, and Insta360’s companion app and/or desktop software will automatically edit the 360 clip to keep your target center-frame. Insta360 has also improved its AI editing capabilities, including its Auto Frae feature which “combs every inch of your 360 footage and reframes your shot to find the highlights.”

“ONE X2 is part camera, part sidekick,” reads Insta360’s announcement about the Insta360 One X2. “With just one device, you can capture every angle at once, and unlock cinematic perspectives that used to require a cameraman or drone.”

Although not listed in the above modes, the Insta360 One X2 can also be used to live stream 360-degree video to compatible platforms, such as Facebook and Youtube, but can also be used as a webcam to get wide-angle split-screen views on Zoom and other conferencing platforms.
Insta360 has also improved its stabilization and horizon leveling algorithms, so its 360 and Steady Cam shots will always shoot smooth. The camera also has a PureShot mode for enhanced dynamic rangeThe varying degrees of brightness that can be captured by a camera or displayed by a playback device. You can think of i... More in low light shots.

The Insta360 One X2 is also IPX8 waterproof–no dive case required–up to 10 meters/33 feet. With the dive case, the camera can be used at depths up to 45 meters. New AquaVision tools will auto-balance the colors in underwater shots.

The latest in the lineup also offers extended battery life with its 1630mAh battery to keep you shooting for up to 80 minutes. The audio capabilities have also been improved, with four mics and new wind-reduction algorithm for stereo audio or in ambisonicPertaining to audio reproduction that captures the spatial acoustic qualities of recorded sound. mode for a “full immersive experience.” The camera is also compatible with AirPods to control the camera or record audio.

Insta360 has also launched a number of new accessories for the camera, including lens guards and a bullet-time cord for slow-motion angles.

The Insta360 One X2 is available to order today for $429.99 at Insta360.com and select retailers worldwide, including B&H Photo Video and Adorama.