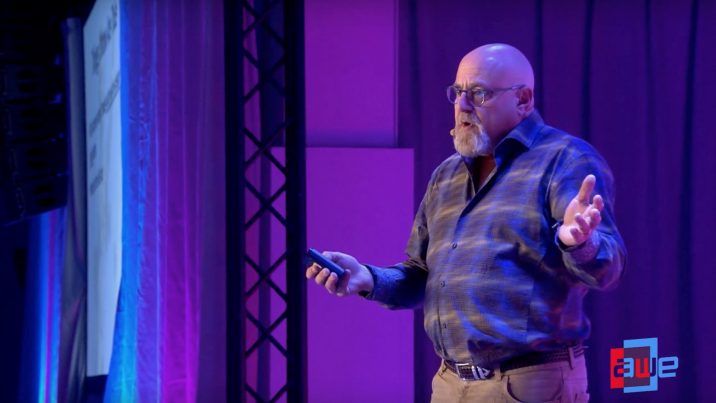 When Immersive Shooter first sat down to speak with immersive tech expert and Forbes contributor Charlie Fink at the end of February about VR and AR for enterprise applications, the world was a different place.

Enter COVID-19, travel bans, self isolation and social distancing. XRAll of immersive media encompassing VR, AR, MR and beyond. Immersive Enterprise will be held exclusively online May 5-7. And Fink’s forthcoming book, Remote Collaboration and Virtual Conferences: The End of Distance and the Future of Work, has become more relevant and urgent than ever.

“That’s pretty much all I’m thinking about right now,” Fink said. Working alongside his students at Chapman University, Fink hopes to release the book May 30th.

Immersive Shooter switched focus to pick Fink’s brain on XR’s immediate applications as more people than ever are working from home and experiencing social isolation, and how these events could shape–and likely accelerate–the improvements the AR/VR/XR industry sorely need.

So…you really think this could be good for our industry? What’s the path forward?

If people are confined to their homes for increasingly long periods of time, I think that will accelerate all sorts of trends in our industry.

When urgent problems like this arise, every workplace will have to adapt to new technologies quickly. Normally, there’s this long, drawn-out process of selling people within an organization on new technology. With the pattern of remote work already established, the need for this type of technology is clear and VR and AR will definitely have a role.

In a way, it’s bad because not all of the technology in our industry is ready, but I generally think this is good for our industry. What do you think are the biggest opportunities for XRAll of immersive media encompassing VR, AR, MR and beyond. growth, as a result of the current situation?

I can’t predict how the world will change after this, but I think significant change is inevitable.

Interest in tele-education and telemedicine–things that have been happening for a while, but very few people cared about–will become very important, very fast.

The idea used to be that a doctor has to lay eyes on you. Insurance companies wouldn’t even cover telemedicine. Now, there’s this general sense of, “Why go to the doctor’s office if I don’t absolutely have to?”

There are a handful of companies that are in the remote expert space, and I think a rise in remote experts is inevitable after this.

Companies are going to have to establish a permanent disaster plan that enables a seamless shift from working in the office to working from home. Companies will have to think differently about their work forces. Conversations that were once nebulous are now real, concrete conversations.

EXP Realty, a cloud-based real estate brokerage, with a 2D campus by Virbela as its only headquarters, has 27,000 real estate agents all around the world, and everyone works from home. We have a lot to learn from companies who are already doing this well.

Can you offer some suggestions of XRAll of immersive media encompassing VR, AR, MR and beyond. tools that could be useful for working remotely?

With remote collaboration, people are having to figure out how to whiteboard, how to have a coordination meeting, a product meeting, etc. There is certainly a need in many organizations for spatial work and that’s a problem our industry can solve.

For example, Avatour is a 360-degree remote telepresence tool where the host takes a 360-degree video of a job site, factory, etc. that is live streamed to colleagues who are virtually present in Oculus Go headsets. The remote colleagues can engage with the host in real time: “Can you get closer to this?” “How wide is that?” Etc. That’s a brand new way of doing something and perhaps the best use of 360 video in enterprise that I’ve seen.

Another remote telepresence tool is a VR education and corporate training platform called Engage. They’ve been doing virtual classrooms for home schooling for a while now. Just recently they hosted 1000s of concurrent users inside a virtual auditorium for HTC’s Vive Ecosystem conference. There are a lot of benefits to doing conferences virtually, and this will make us think differently about what a conference is.

Finally, there’s the use of immersive social applications–like Altspace, but also VRChat and RecRoom–that can be adapted for business spaces. For example, the whiteboard tool in RecRoom. What might’ve started off as a social drawing tool is all of a sudden being used for businesses.

Last night, I tried to get on RecRoom and it was so slammed, I couldn’t get in. There’s also Facebook Horizon, Facebook’s virtual world that’s now in closed Alpha. Most people don’t have VR headsets, so how can they takeIndividual instance of a shot; a take = each time the camera is started and stopped. advantage of the tools you’ve mentioned here?

Fortunately, people have 2D ways of participating in virtual worlds, which is why I think virtual worlds will be more important than virtual reality at this stage. People are just starting to think 3D.

What about the technology do you think needs to improve for AR/VR to become more prevalent in daily work?

If we want people to wear them everyday, they need to be lighter. We don’t have headsets that are comfortable enough to wear for extended periods of time. Even I jump in and out of my headset for specific reasons and tasks.

Quest and Magic Leap were solid steps in the right direction, but they have their limitations. For consumer adoption, the next generation of headsets will be more acceptable to more people, but even that won’t bring the tidal wave (though I don’t think we’re far from it).

Apple’s coming out with glasses in 2-3 years and may announce something sooner than that. I don’t know what the killer app will be to push consumer adoption of XRAll of immersive media encompassing VR, AR, MR and beyond.. For the PC, it was email and shopping.

But, the potential for XRAll of immersive media encompassing VR, AR, MR and beyond. for businesses is very clear already: training, simulation, and remote and spatial work. Another thing working in our favor is that in business, people put on whatever they need to put on: hardhat, safety glasses, etc. There’s no vanity to it. Jumping ahead 3-5 years, we’ll have better headsets, better resolutionThe number of pixels in an image, typically presented as a ratio of the total pixels on x axis to the total pixels on th... More, more bandwidth with 5G, and those things will be amazing for VR. We’ll see much more impressive and comfortable headsets. And, I think what we’re going through right now has the chance to accelerate all kinds of trends in XRAll of immersive media encompassing VR, AR, MR and beyond..

When (and how) did you become involved in the VR & AR industries?

I was a VP at Disney from 86-92. Then I joined Virtual World Entertainment as its COO. VWE used networked flight simulators to put people into CG environments. We opened 32 locations on four continents in three years. I left to join AOL as its SVP content.

Two decades later, in 2016, I was writing on Medium and rediscovered VR. When I first experienced VR, I immediately jumped to its entertainment possibilities. I was hooked on that, as much as the immersive experience, which of course has improved exponentially.