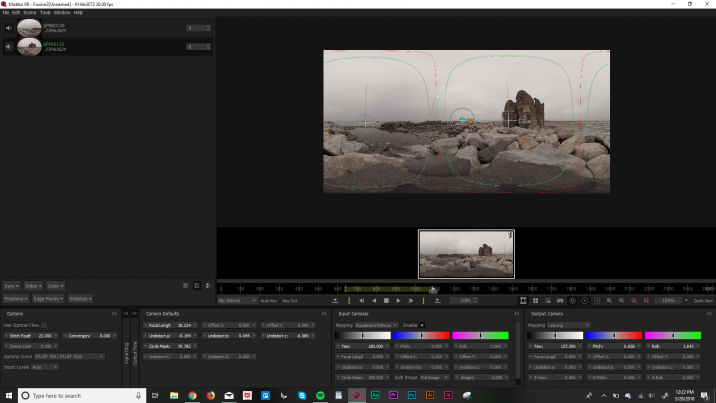 For the first few years I shot 360 video, the best stitching tool on the blockPosition and choreograph actor movements in a scene. was Kolor’s Autopano Giga and Pro suite of tools. However, with the closure of Kolor and the advent of new tools, my favorite stitching solution is MistikaVR by SGO.

If you’re new to MistikaVR, it costs 49 euros per month for a personal plan. If you’re doing 360 videos regularly, it really is a worth investment. However, if you’re on a budget, many cameras come with their own companion stitching software that does a decent job (though they lack the control you have with Mistika, as well as the bells and whistles).

Here’s how to stitch with Mistika VR:

First, install MistikaVR on your machine.

I also recommend watching this guide, by SGO, walking you through Mistika VR’s interface. It will help you with the first few steps in this guide.

When you open MistikaVR, you’ll need to create a new project with resolutions matching your camera’s output.

Then, select file, new sequence. Open the folder with your first shot and drag both the front and back camera files into MistikaVR and drop. You’ll see both shots on top of one another.

Then you’ll select scene at the top left and then load presets and choose your camera from the list. Misitika will automatically stitch your videos and you’ll see them in equirectangularStretching a spherical image into a flat, rectangular format. (i.e. the way a world map represents the spherical Earth).... More format.

The first thing you’ll do is select the range of the video you plan to use in your piece, give or takeIndividual instance of a shot; a take = each time the camera is started and stopped. some extra seconds at the beginning and end. You can do this by clicking on the bar below the movie window and clicking I for in and O for out.

Then, you’ll correct the horizon by clicking Ctrl and then clicking on the image in the movie window and dragging to adjust the horizon.

The next thing you’ll do is adjust your stitch using edge points. Click the two circle icons under the movie window, just to the right of the icon that looks like a VR headset. This will show you your stitch linesThe seams in a 360° video where footage from one camera has been combined with another.. There’s also a button at view in headset mode.

Choose the camera you’d like to add an edge point to and then click edge points in the bottom left and then select add edge point from the dropdown. You can then drag the Edge points around to ensure a stitch isn’t crossing in a bad place (like on someone’s face). Ideally this won’t be the case because you’ll position the camera correctly when you’re shooting, but if you DO have an issue, you can fix it within reason here. To delete an Edge point, select it and then choose delete edgepoint from the drop down.

You can also mess around with optical flow stitching because it’s possible that that single button could fix a number of ghosting and alignment issues. However, MistikaVR recommends stabilising your shot before toggling on optical flow.

If you need to stabilise your shot, select the stabilise drop down and select stabilise. Be warned, this does takeIndividual instance of a shot; a take = each time the camera is started and stopped. quite some time to render, so you definitely want to select only what you need. MistikaVR also has a number of features within the stabilise section, including prioritize front, floow overall heading, and follow heading after X frames.

After you’ve done that, you should have a pretty good looking shot to render out. Select file, then render. I like to include the audio and export in ProResA high-quality video compression format created by Apple that supports up to 8K resolution..

I also recommend this playlist from CreatorUp’s Hugh Hou about how to stitch perfect 360 video–mono and stereo–with Mistika VR.

As I mentioned earlier, SGO updates MistikaVR with new features regularly. One of them being a KeyframingA process to create animations by identifying parameter values(such as an object’s size or its position in the frame) ... More feature I have yet to play with. Depending on the complexity of your shot, it may be useful for you. Here is a tutorial from SGO.

If you can’t afford the monthly expense of MistikaVR, it is possible to stitch using your camera’s free companion software. There are plenty of tutorials out there for each and every 360 camera’s companion stitching software.

Here’s one for GoPro Fusion Studio:

And, while their simplicity may make them less valuable for experienced immersive shooters, that simplicity also makes them easier to master for beginners.