If you own the GoPro Fusion and you don’t plan to shell out for a third-party stitching software, such as MistikaVR, you will be using GoPro Fusion Studio to stitch your footage.

Although the software is quite simple, I’ll walk you through my workflow and some of the common issues you may encounter when using Fusion Studio.

When you first open Fusion Studio, go to “edit” in the top left corner and select “preferences”. Make sure Fusion Studio is set to open when the camera is connected. Then, close out of the software, turn on your camera, and plug it into your computer. 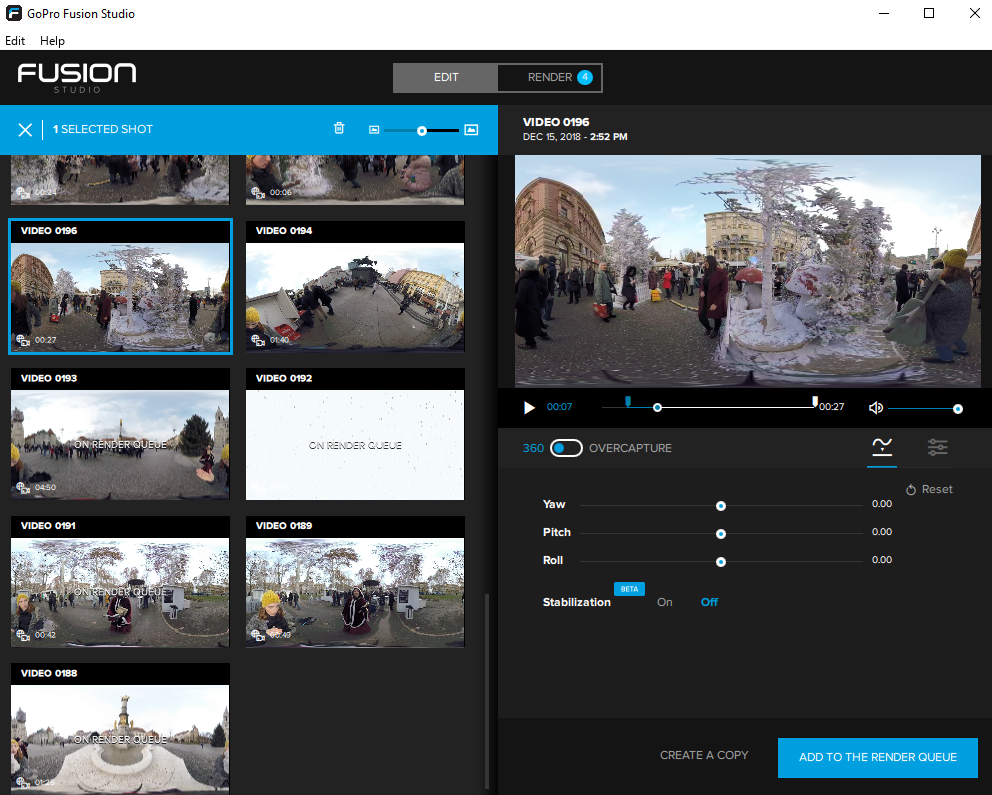 Fusion Studio will automatically launch and will prompt you to browse the media on your camera. Alternatively, you can save the files from the SD card directly to your computer. They need to be saved in a very specific way (outlined here), but some people have reported corrupted footage and more crashes when bringing in media directly from the camera, so it may be worth it.

Once you’ve loaded your media within Fusion Studio, you will need to make a small number of edits to each clip before adding it to your render queue.

The first step will be to set the in and out points of your clip. Be a little generous, but do realize that you will be adding to your render time if you keep things you don’t intend to use.

Under the timecodeA numerical code that identifies videos by the hour, minute, second, and frame in the format HH:MM:SS:FF (eg. 23:59:59:2... More, you will select whether the video is 360 or overcapture (cropping fixed frame video out of a 360-degree video).

Under the icons to the right of the 360/overcapture toggle, you can also adjust the horizon via the yaw, pitch and rollTerm meaning “record,” dating back to a time when physical film was rolled on an axle past the gate of a camera. sliders (you can also do this in Premiere, though you may choose to fix it as best you can here and fine-tune it in Premiere).

You will also select stabilization. For handheld and motion shots, full stabilization will be best. For shots captured from a safe, stable, immobile tripod, you can save yourself a bit of rendering time by turning stabilization off. 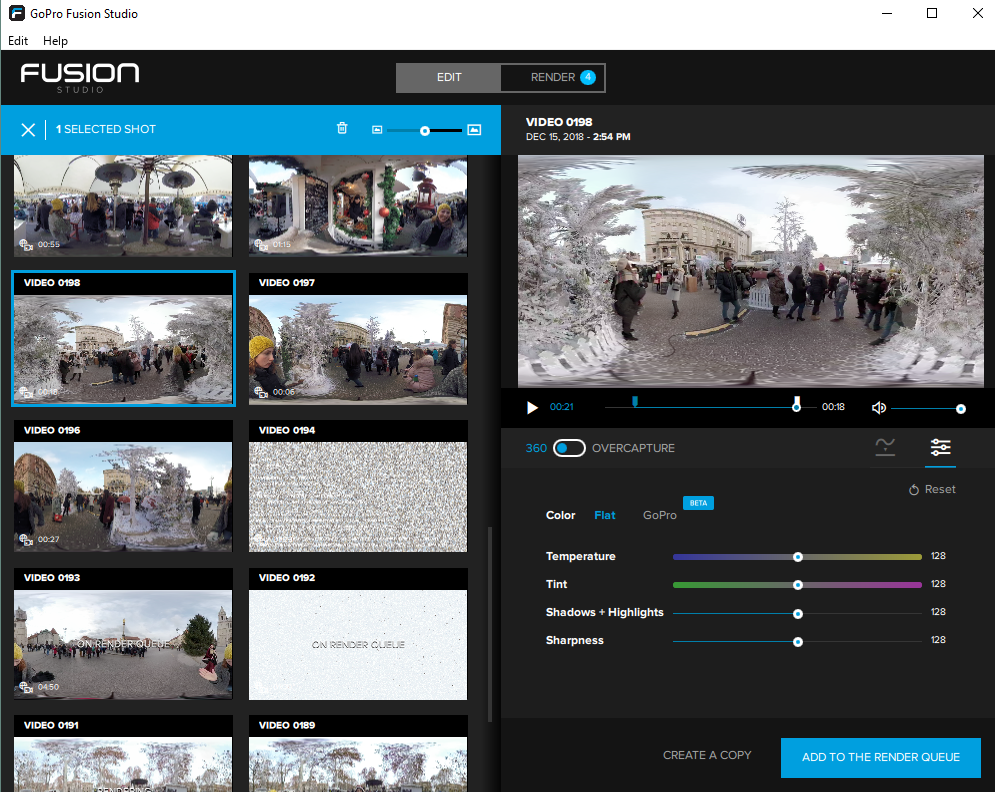 Under the sliderA tripod ‘head’ mounted on a fixed track that enables the camera to smoothly move left and right or forward and back... More symbol, you can make color corrections, of you can turn the color mode to flat (which you will most likely want to do so you can color correct to your heart’s content in Premiere). 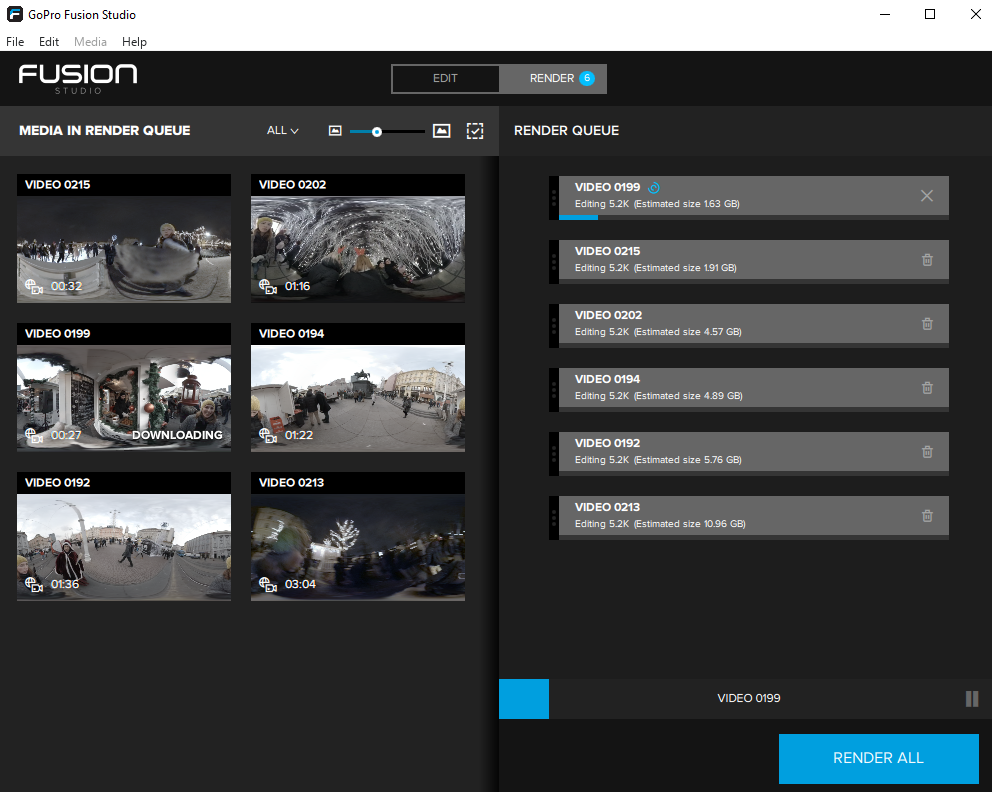 After you’ve made these adjustments, you can add the clip to your render queue. You’ll be prompted to choose the purpose of the video (editing, YouTube, Facebook or Vimeo), resolutionThe number of pixels in an image, typically presented as a ratio of the total pixels on x axis to the total pixels on th... More, whether or not D Warp is turned on to reduce parallaxThe optical effect where an object’s position appears to differ when viewed from different positions, i.e. the left ey... More issues, and audio options. I typically use stereo for my interview audio (which I also capture on a secondary mic) and 360 audio for ambient sound. You’ll also select the video codec: H.264, CineForm ‘422 High’ or ProResA high-quality video compression format created by Apple that supports up to 8K resolution. 422. The last two will be higher quality, but much larger file types.

How long it will takeIndividual instance of a shot; a take = each time the camera is started and stopped. to render each video will depend on your computing power and the options you select for export.

After rendering, the stitched footage will be saved in whatever location you specified under the “preferences” tab.