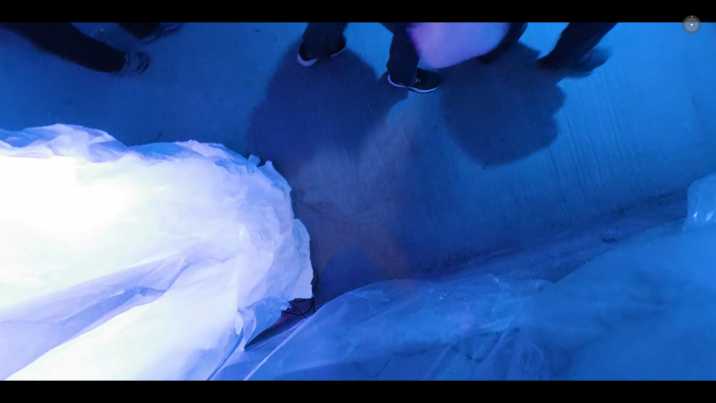 One of the laziest ways to break immersion in your 360 videos is for the tripod to be visible at the nadirThe bottom of the sphere. (directly below the camera).

It may be a pain to have to remove the tripod, dolly, or drone from every shot, but it does improve the user experience. Luckily, there are also plenty of ways to do it!

Cover the tripod with a logo

This is the second laziest way to handle the tripod, coming in a close second to not removing it at all. Although it’s lazy, that doesn’t mean it’s a bad solution for some videos, especially if you’re live streaming or you’re on a tight deadline.

All you need to do is format a round logo properly and then you can add it on a new track above all your videos and–viola!–the tripod is hidden behind your logo.

This tutorial is from YouTuber Ben Claremont:

Remove the tripod with Photoshop

This method is simple and is great for shots where the camera is still, but can also be time consuming if you have many shots to apply it to. However, it’s repetitive, so once you get into a groove, it shouldn’t takeIndividual instance of a shot; a take = each time the camera is started and stopped. too long to wipeA transition effect where the image displayed slides offscreen, revealing the new scene behind. it out. It doesn’t work if the camera is moving, if moving objects are traveling through the area you need to remove, or if the lighting situation is changing (i.e. timelapses).

It’s my method of choice, so (unlike the other options), I’m going to also outline it via text, in addition to the tutorial video below from 360 filmmaker and Immersive Shooter contributor Alex Pearce:

Here they are, step by step:

Step 1: Download the actions linked in the description of the video above on YouTube and bring them into Photoshop.

Step 2: In Premiere, zoom in on the shot from which you want to remove the tripod and grab a single frame, then click Ctrl + M to save it as a TIFF.

Step 3: Open the TIFF in Photoshop. Then, you’ll create a copy and then a new layer.

Step 4: Select your background copy and then apply the first two actions, rotate 180 degrees and then equirectangularStretching a spherical image into a flat, rectangular format. (i.e. the way a world map represents the spherical Earth).... More to angular fisheyeAn extreme wide-angle lens, with image distortion occurring at the edges of the frame.. You then have a little planet/downward view of your tripod.

Step 5: Zoom in, select the new layer (make sure apply to all layers is checked), and then use the healing (Ctrl + J) and clone stamp (Ctrl + S) tools to remove the tripod. I tend to have better luck with the clone stamp tool (simply alt click the section you want to use as your “palette” and then release and click and drag to paint over your tripod. Here is where you’ll learn the hard way why you should place your tripod on a simple surface rather than some complicated pattern.

Step 6: Apply the final three actions. Then save your TIFF, open it in Premiere and place in on the track beneath your main video track.

Step 7: Select your video, go to the opacity drop down and select the pen icon to make a mask around your tripod (zoom out so you can make sure you got the whole thing at the bottom of the video). Once your mask is complete, check the box in the opacity panel that says invert and voilà!

Step 8: Repeat for each static shot

Remove the tripod with After Effects

This is an often-used alternative to the method above. It really is a matter of preference, which one works better for a particular shot, and where your skill set lies (for example, I’m more comfortable in Photoshop than After Effects).

(He’s also got a way to remove the tripod within Adobe Premiere, right after the After Effects tutorial in the video above).

Remove the tripod with Mocha

This is probably the fastest method, but it does require having access to Mocha Pro 2019’s plug-ins. Mocha Pro 2019 offers a few methods to remove the tripod, drone, dolly, etc., among them, rotopainting and object removal tools.

Rotopainting, with the lens module, allows you to simply paint over the area similar to the way you would clone stamp in most Adobe tools. It works well for static shots where the color/light/etc. isn’t changing as time passes.

Where Mocha is really powerful is with its ability to remove moving objects, such as dollies and drones. This tool allows you to define what to remove, track the background, and remove the object by using clean frames from other points in time or via a clean plateA part of a composite, usually intended as a background, though here it refers to a duplicate version of the main shot w... More.

This tutorial comes straight from the team at Mocha: