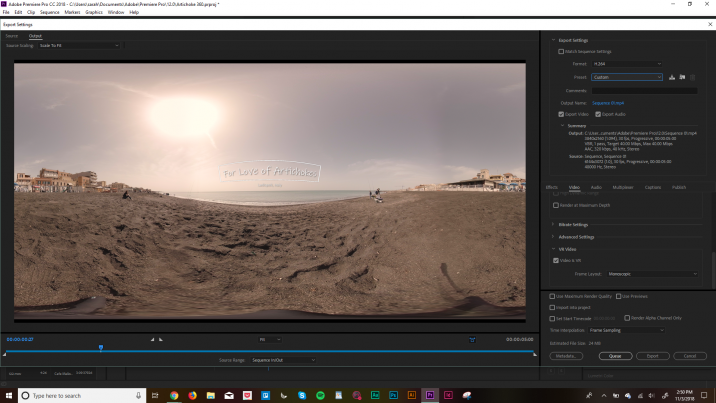 Although there are plenty of ways to get fancy with titles and text in 360 video, it’s also possible (and effective) to keep your workflow quite simple, especially for beginners.

In our guide to editing 360 video in Premiere, we touched on adding titles to your 360 videos . Here, we’ll dig into those tools.

The first thing you’ll do is bring in the title as you normally would, type your text, adjust fonts and colors, etc. Be  sure the scale is set to 100! You want it large here because that will mean to resolutionThe number of pixels in an image, typically presented as a ratio of the total pixels on x axis to the total pixels on th... More will still be high when you change the size after using the “VR Plane to Sphere” tool. 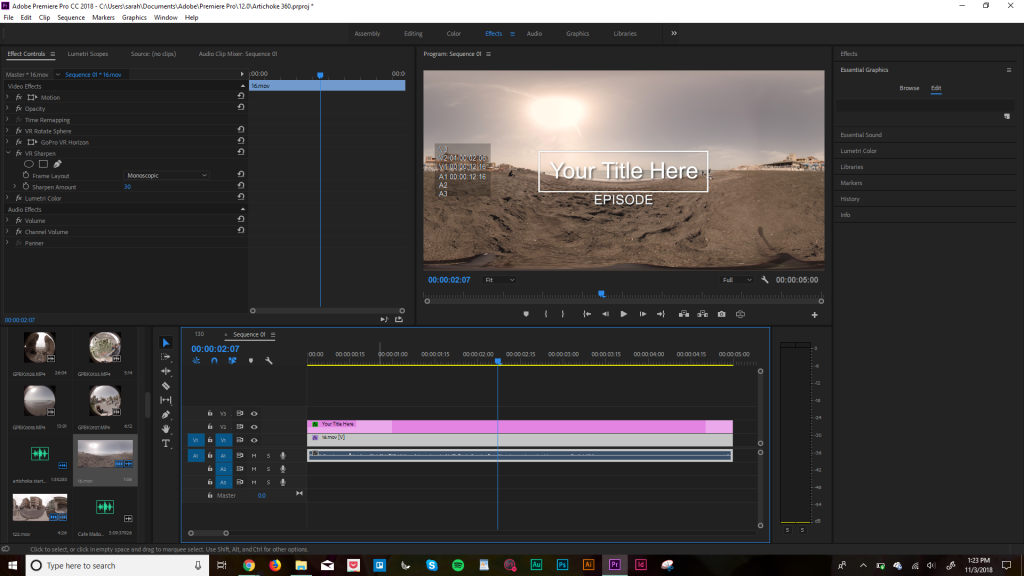 Then, go to “effects”, “video effects” and then “immersive video”. Drag and drop the tool “plane to sphere” onto your title or graphic. This will warp the text in such a way that it fits the sphere and looks natural in a headset. 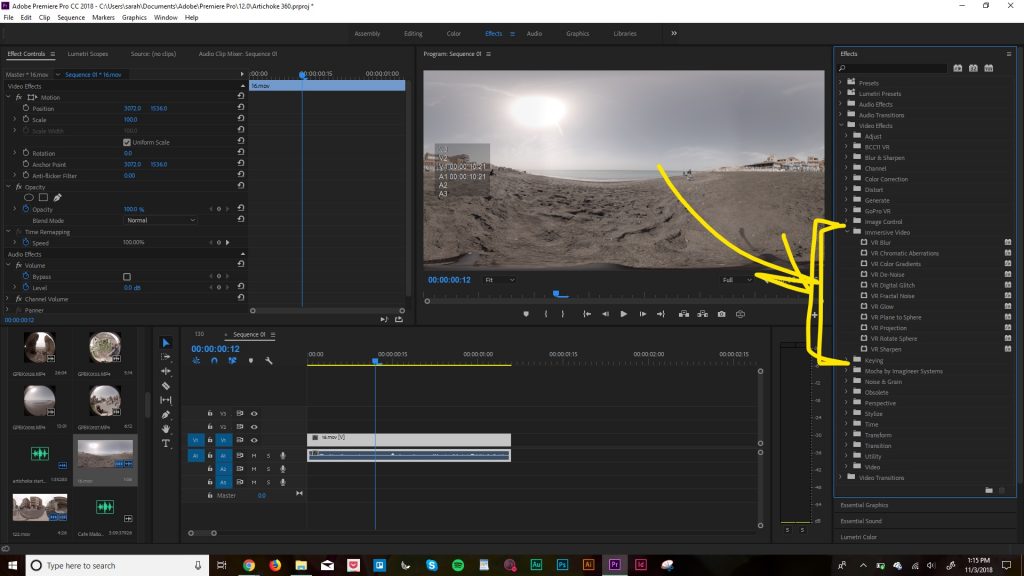 In the “effects controls” panel, under “motion” controls, you can use the “position” tool to adjust the horizontal location of the text, however, don’t mess with scale or vertical position just yet. We’ll do that with under the “VR plane to sphere” controls.

Under the “VR plane to sphere” controls, first select monoscopic or stereoscopicVideo shot with two parallel cameras (or in the case of 360° video, multiple pairs of parallel cameras) Commonly referr... More, depending on your video clip. It is here where you will adjust the scale and location of the text in the frame. 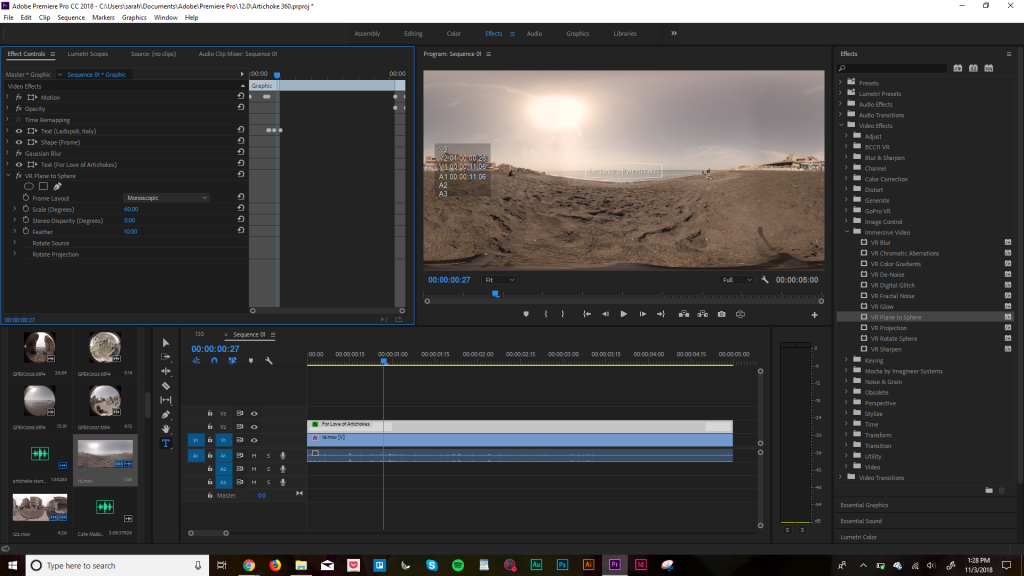 The location can be adjusted using the “rotate projection” tools. I normally start by using the “projection tilt” tool to bring my text above or below the horizon line, depending on the background. 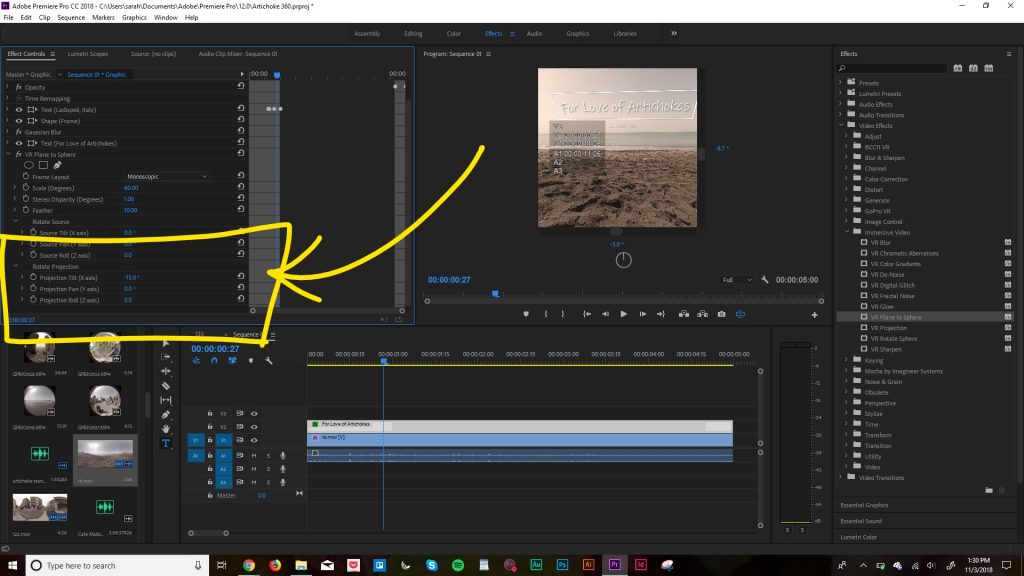 The “rotate projection” tools can also be used alongside the “rotate source” tools to make your text appear to be lying flat on something in the scene, such as a wall or cliff face (in addition to just moving it around the sphere).

Be sure to check what the titles look like in VR viewing mode (visit our Premiere tutorial to learn about that). 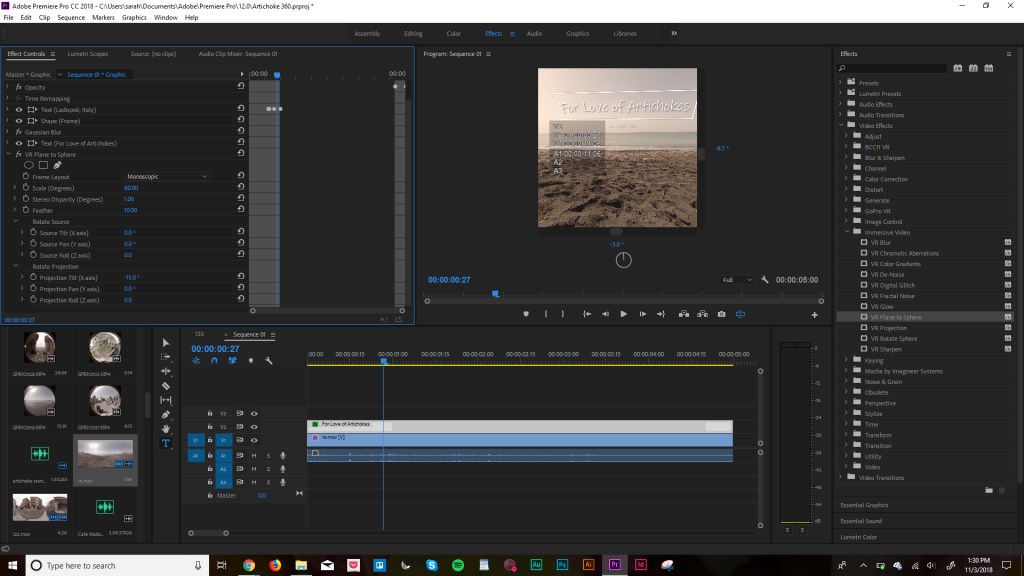 Another tool you may use under the “VR plane to sphere” controls is “stereo disparity”, which can be used to bring the text closer to or further from the viewer. This is imperative when using stereoscopicVideo shot with two parallel cameras (or in the case of 360° video, multiple pairs of parallel cameras) Commonly referr... More footage. If the text looks like it’s behind an object in the scene, it will create what is known as a stereo conflict, which will make the viewer go cross-eyed trying to resolve the visual paradox they are experiencing.

Once you have the title as you like it, you may want to copy the titles to place them in more than one spot in the scene. We normally do one title–two maximum–but some creators do even three or four to ensure people will see them regardless of the direction they’re looking.