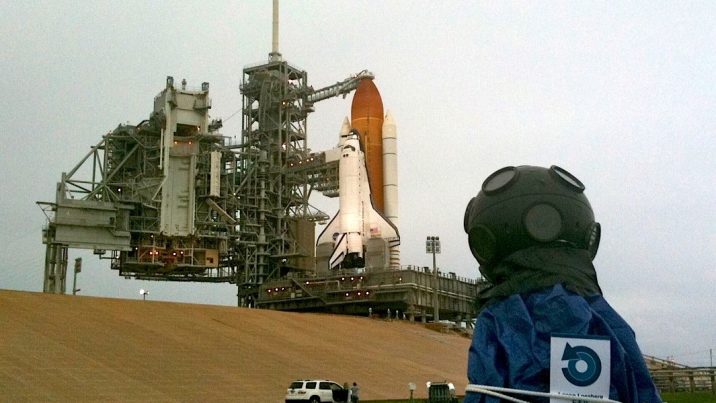 (2011) "This was used for the last space shuttle launch (Atlantis) from the launching pad at Kennedy Space Center in Florida. It would take about 15 minutes to tell you all the issues involved but we used an Immersive Media camera that we modified. We had to place the camera 24 hours prior to launch then have zero access to it until after the launch!"--Lance

For most of us, someone who’s been shooting 360 video for even five years may seem like an expert–and they probably are! But BigLook360’s Lance Loesberg puts just about everyone in the industry to shame with his 20+ years of experience producing 360 videos. 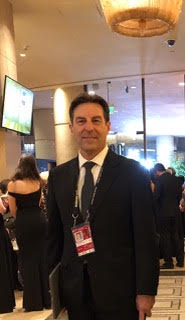 Lance Loesberg at the Golden Globes

He was actually responsible for one of the first commercially used–if not the first–360 video of all time: a virtual test drive for GM in the ‘90s. He and his team built custom rigs and developed proprietary software to produce the first generation of commercial 360 video. He has seen early camera manufacturers rise and fall, and seen his little niche embraced by tech giants like Facebook, Google and Samsung.

They have live streamed in 360 from the Red Carpet of the Academy Awards, Emmys and Grammys, other events for AT&T, Time-Warner and the demolition of Texas Stadium from the inside, to name just a few (and–most recently–at the 2018 Golden Globes). In total, the company has done between 400 and 500 360 video productions since 2009.

We sat down with Lance Loesberg of BigLook360 to talk about how 360 video production has changed over the years–no surprises here, it has changed a lot–and how to operate a successful studio. 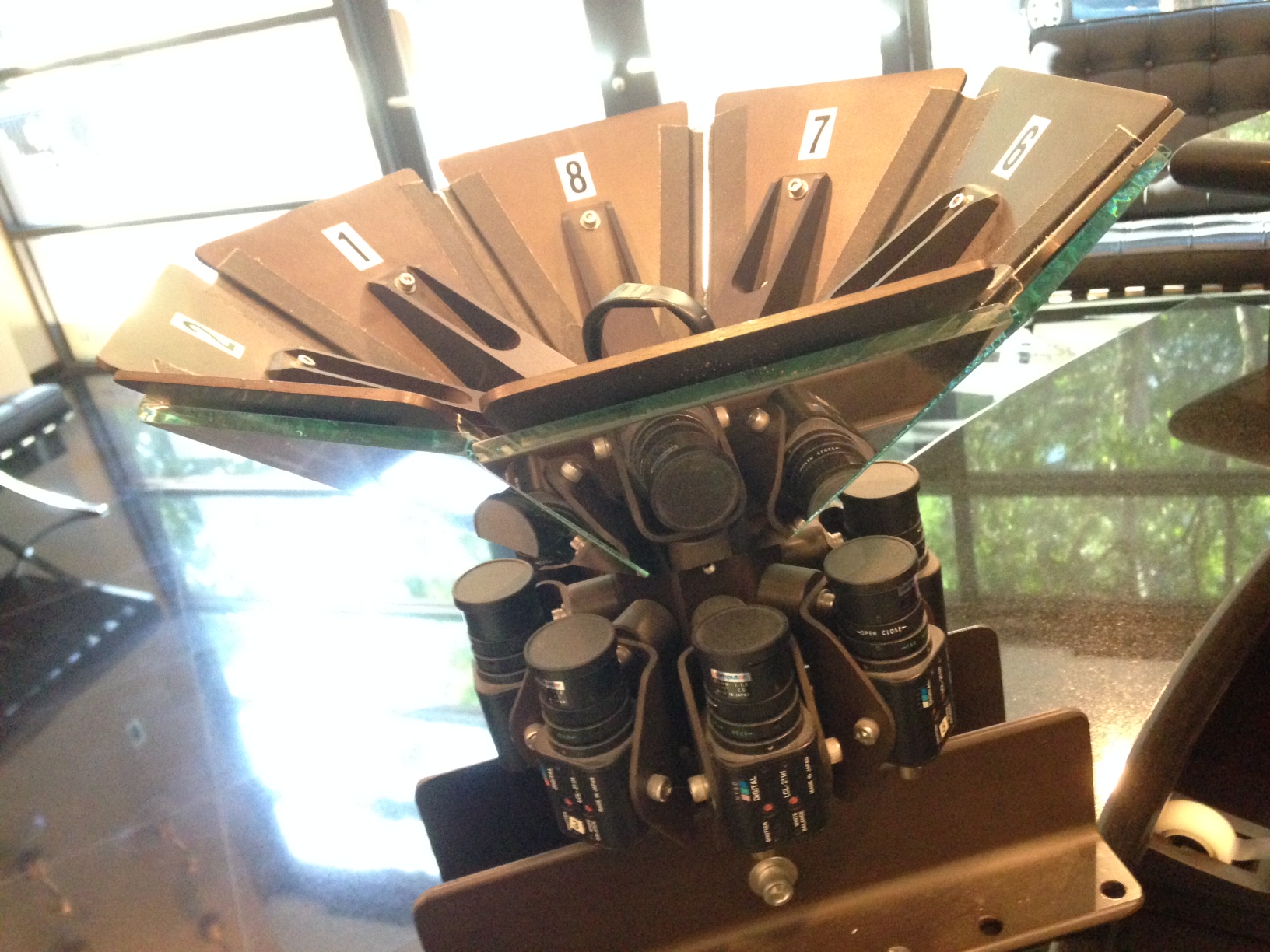 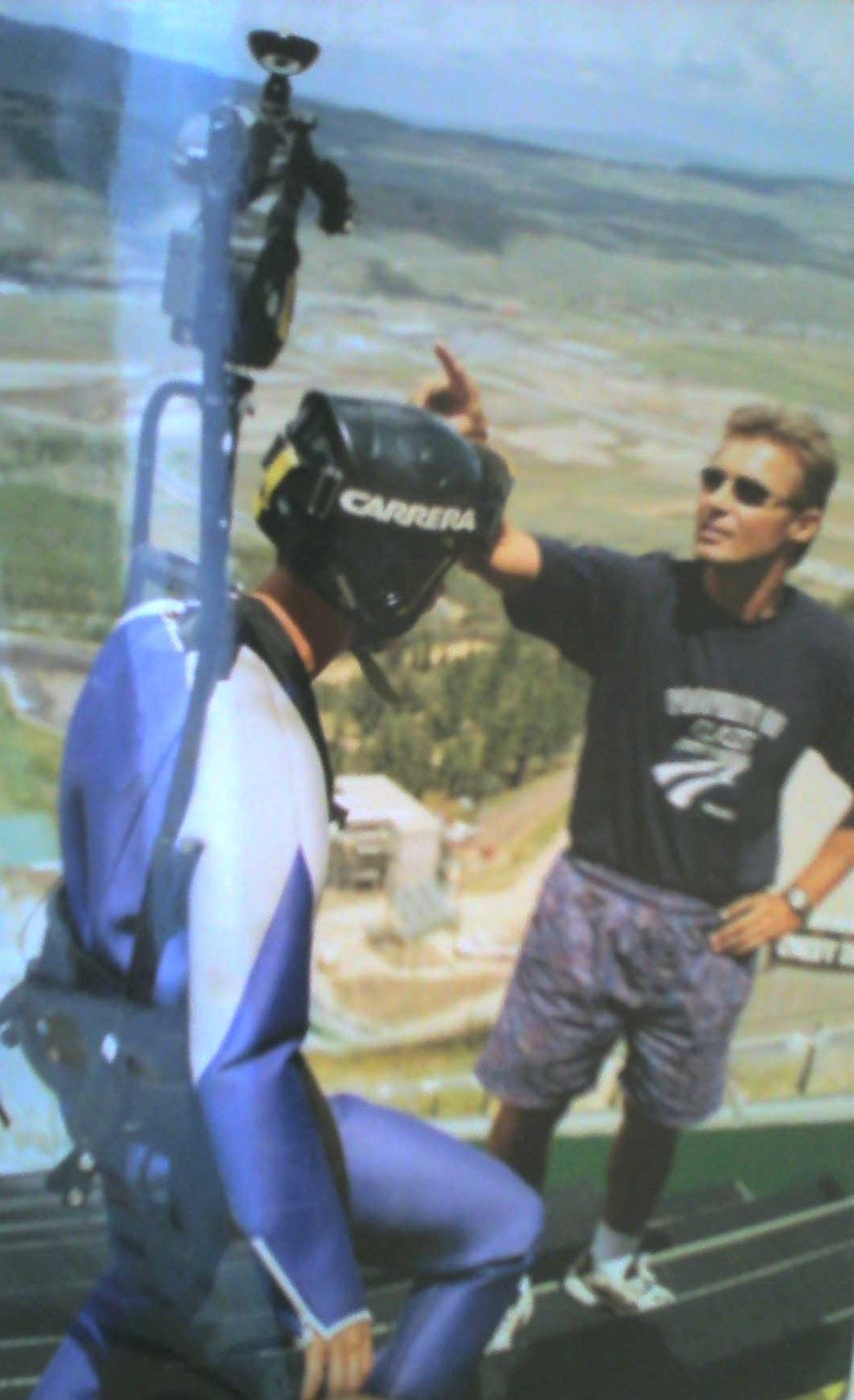 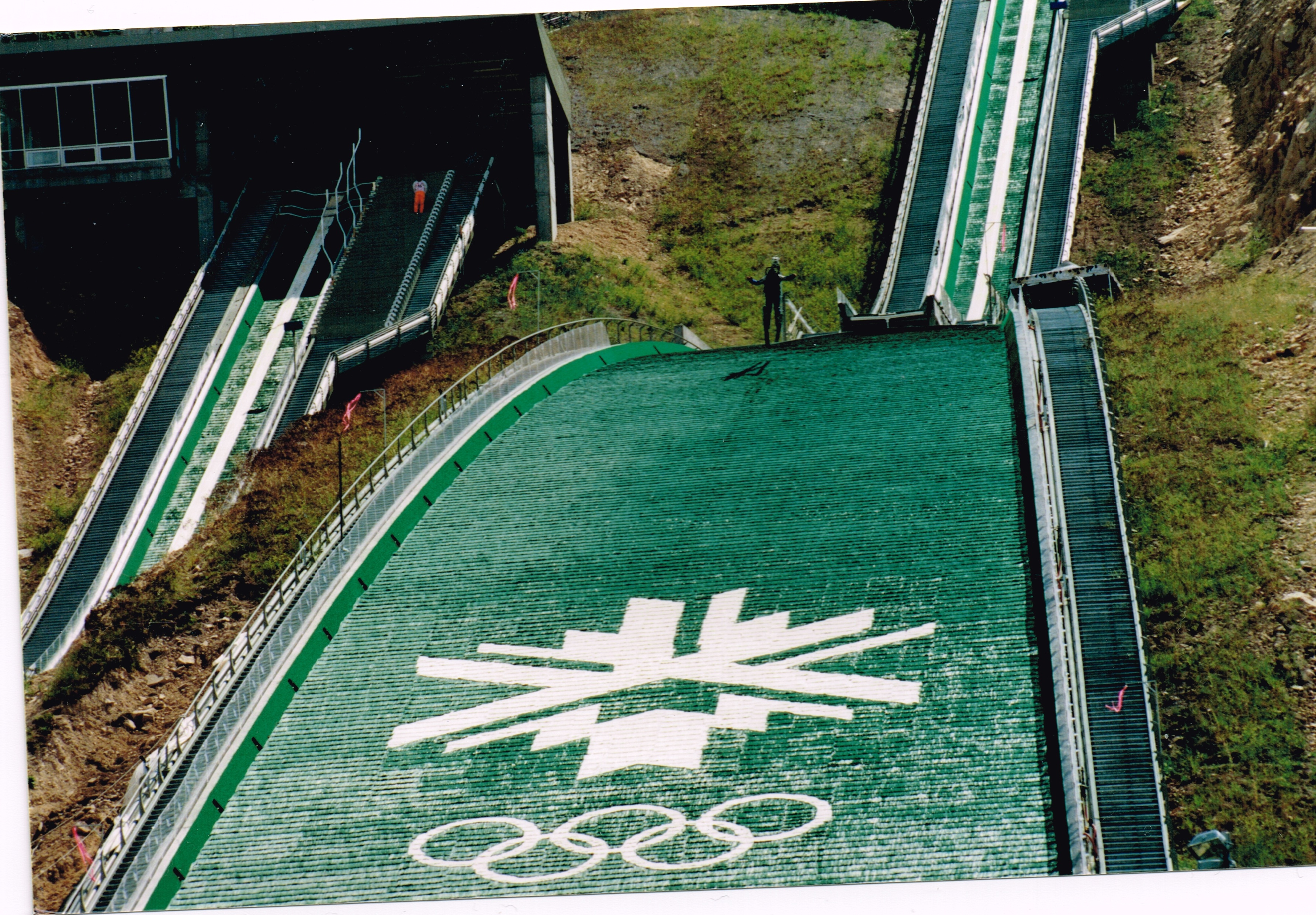 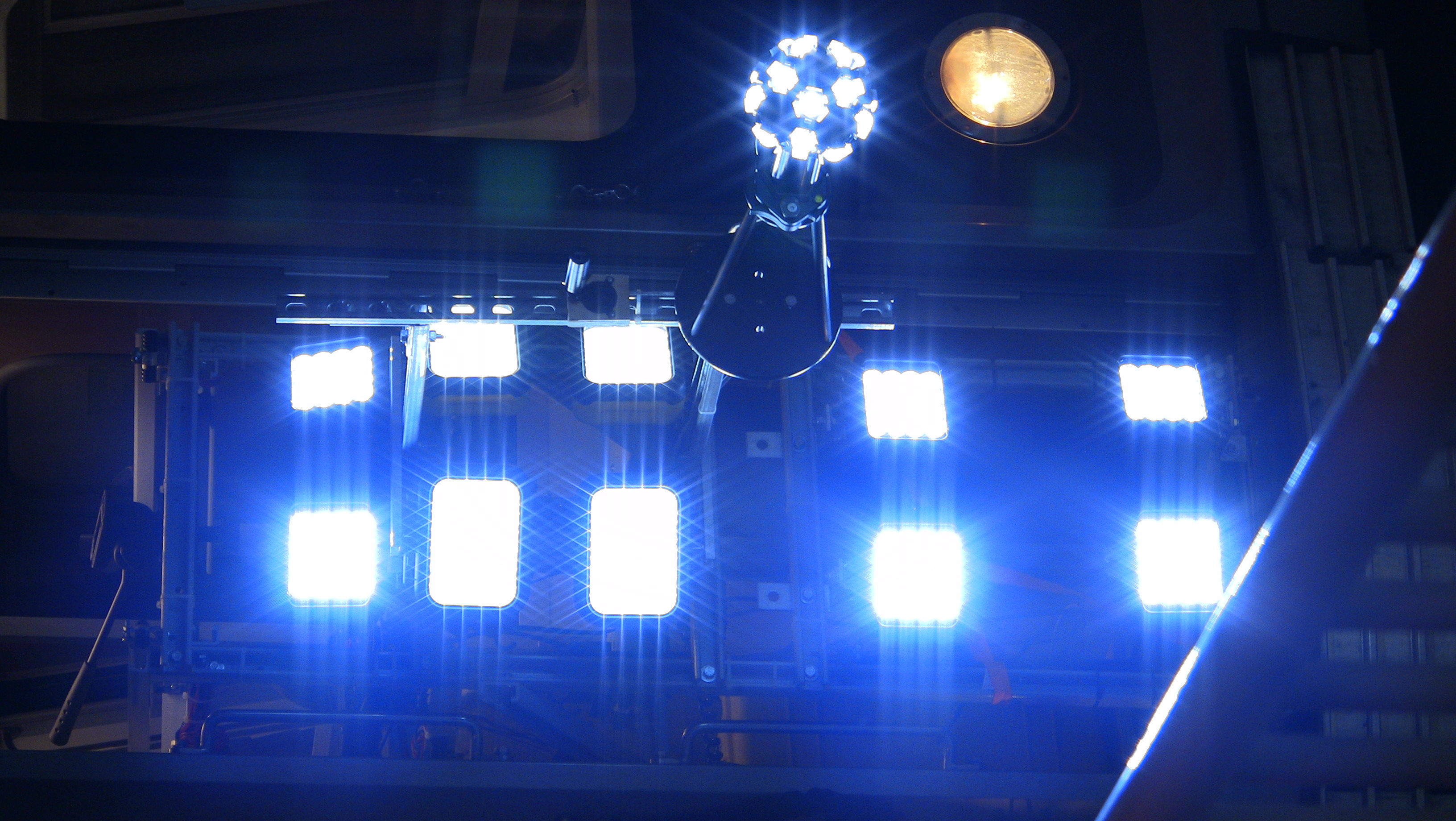 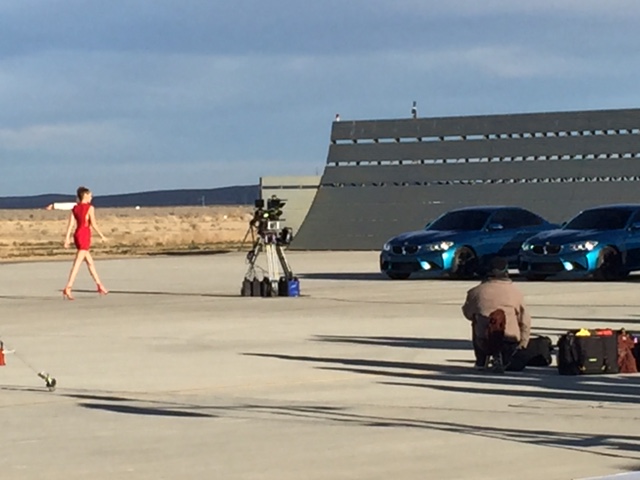 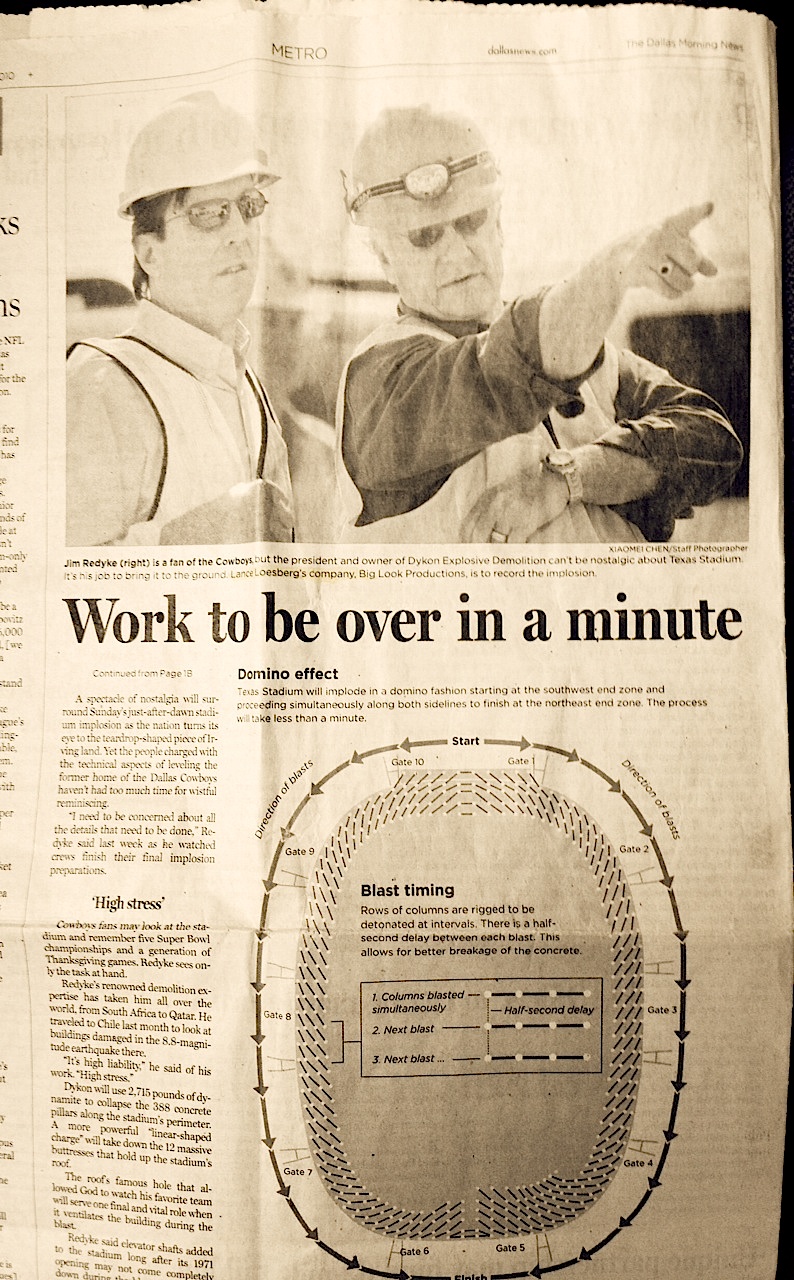 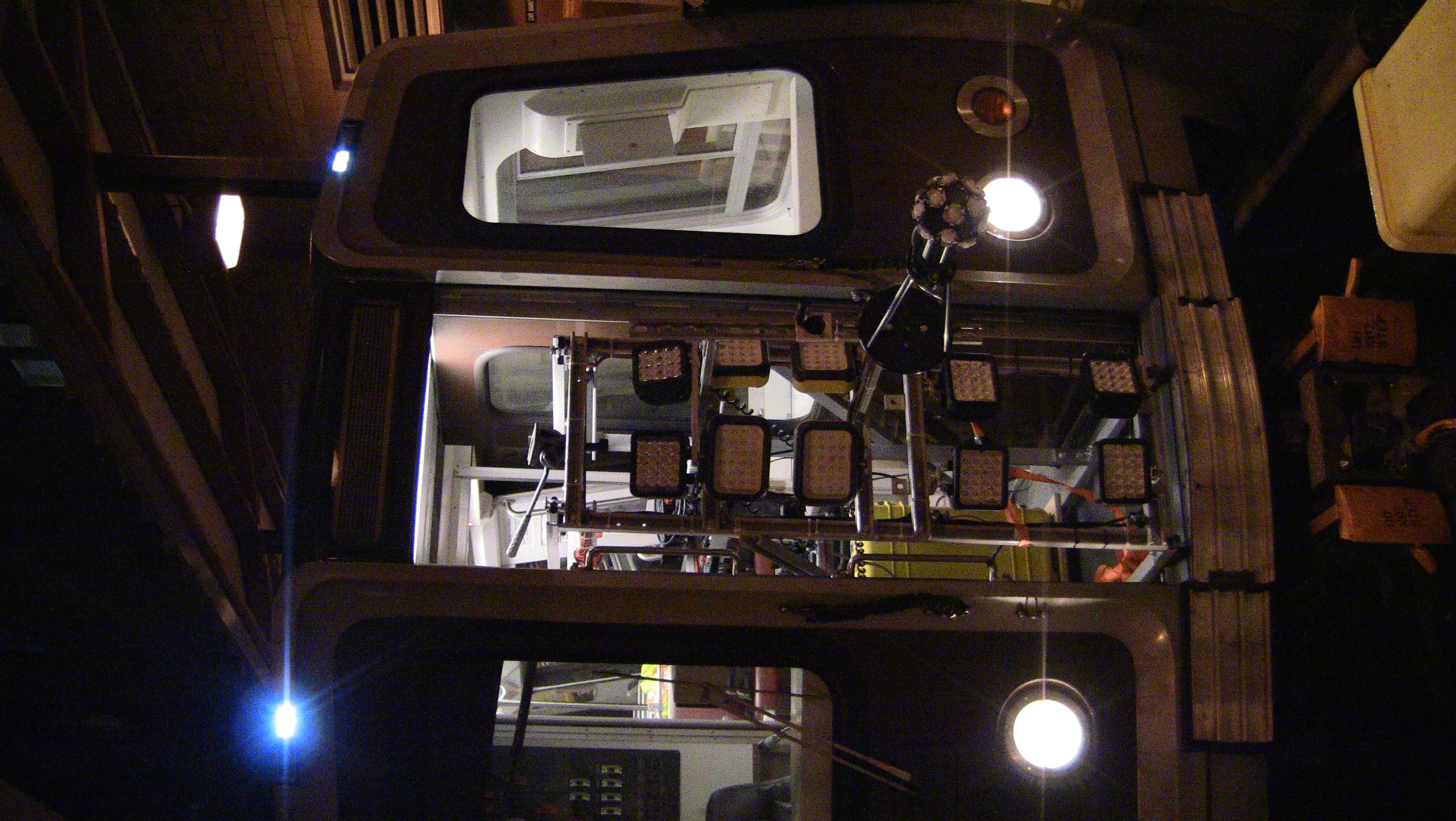 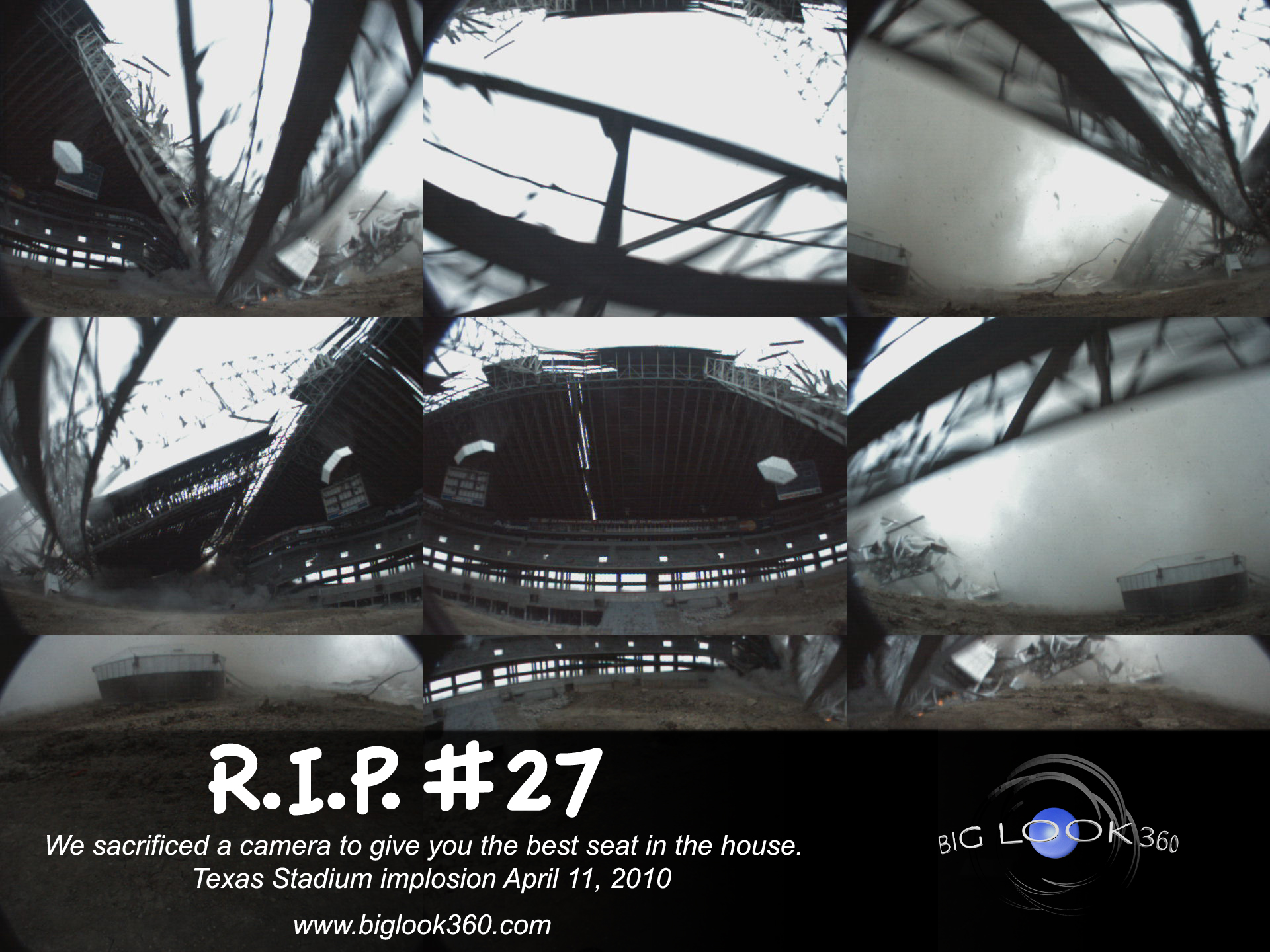 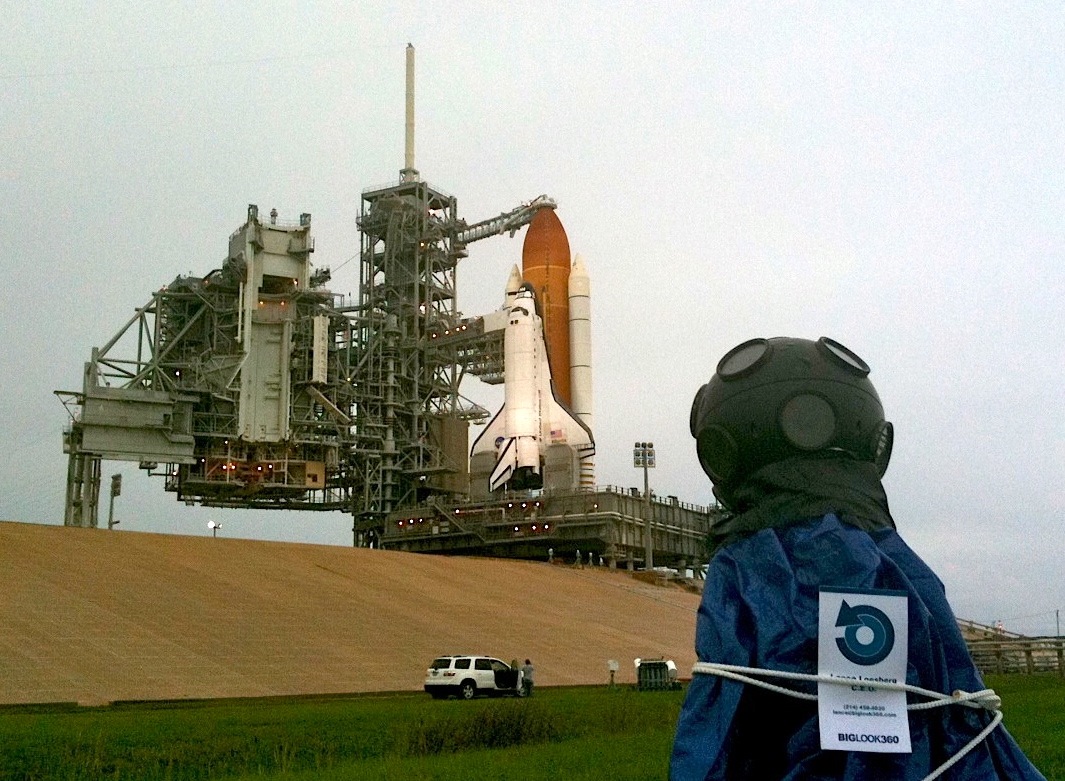 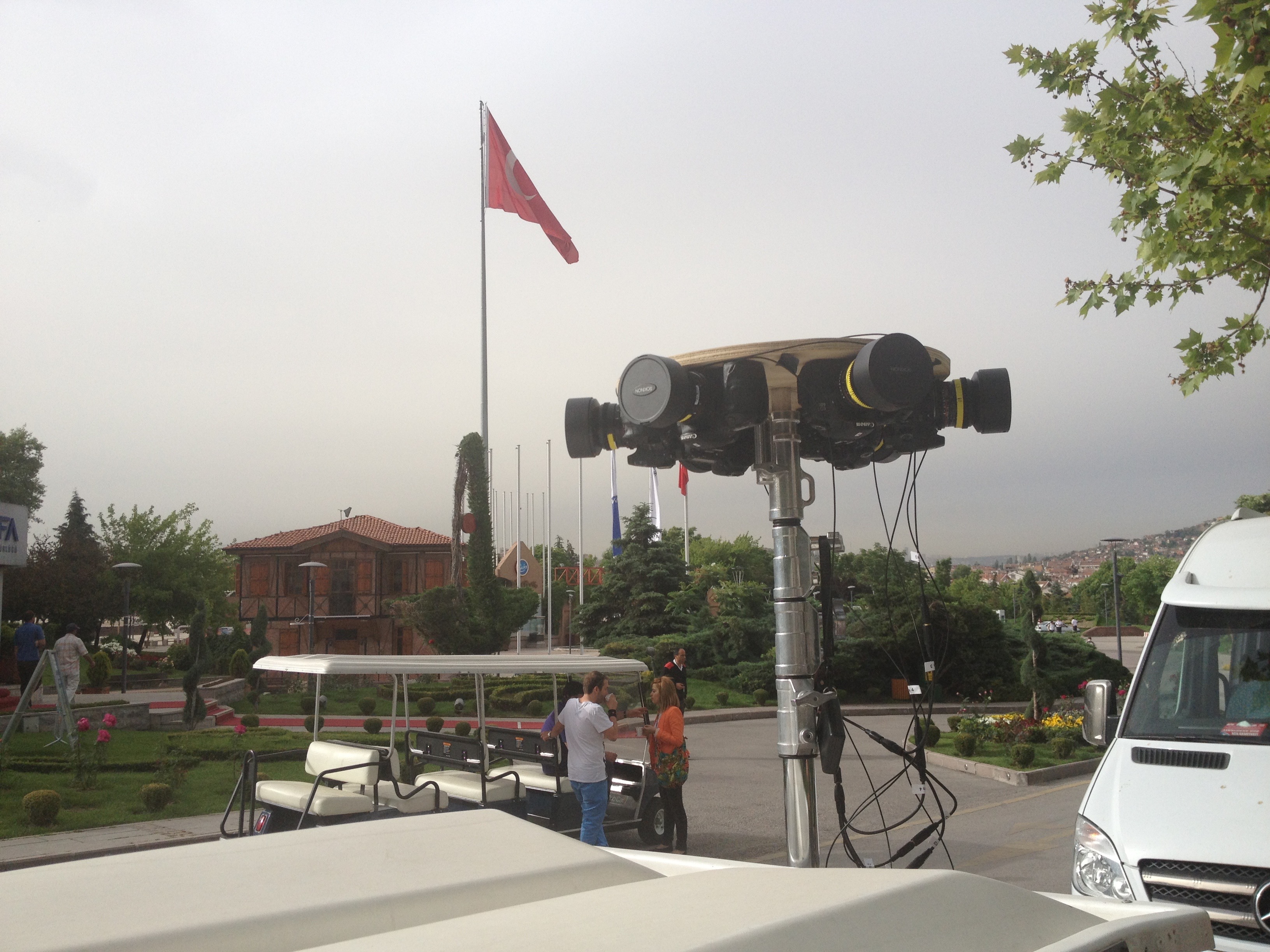 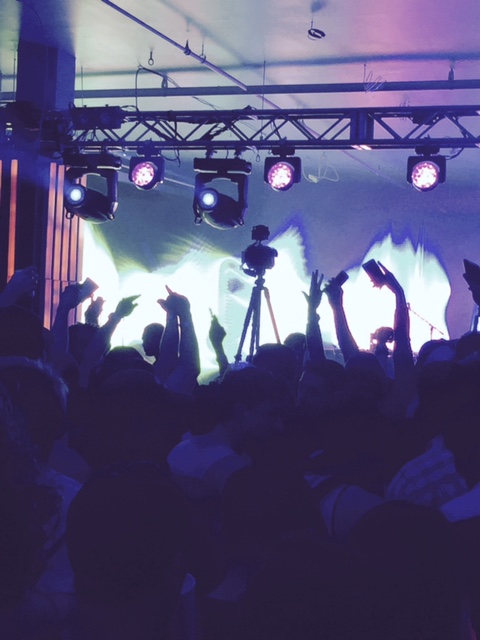 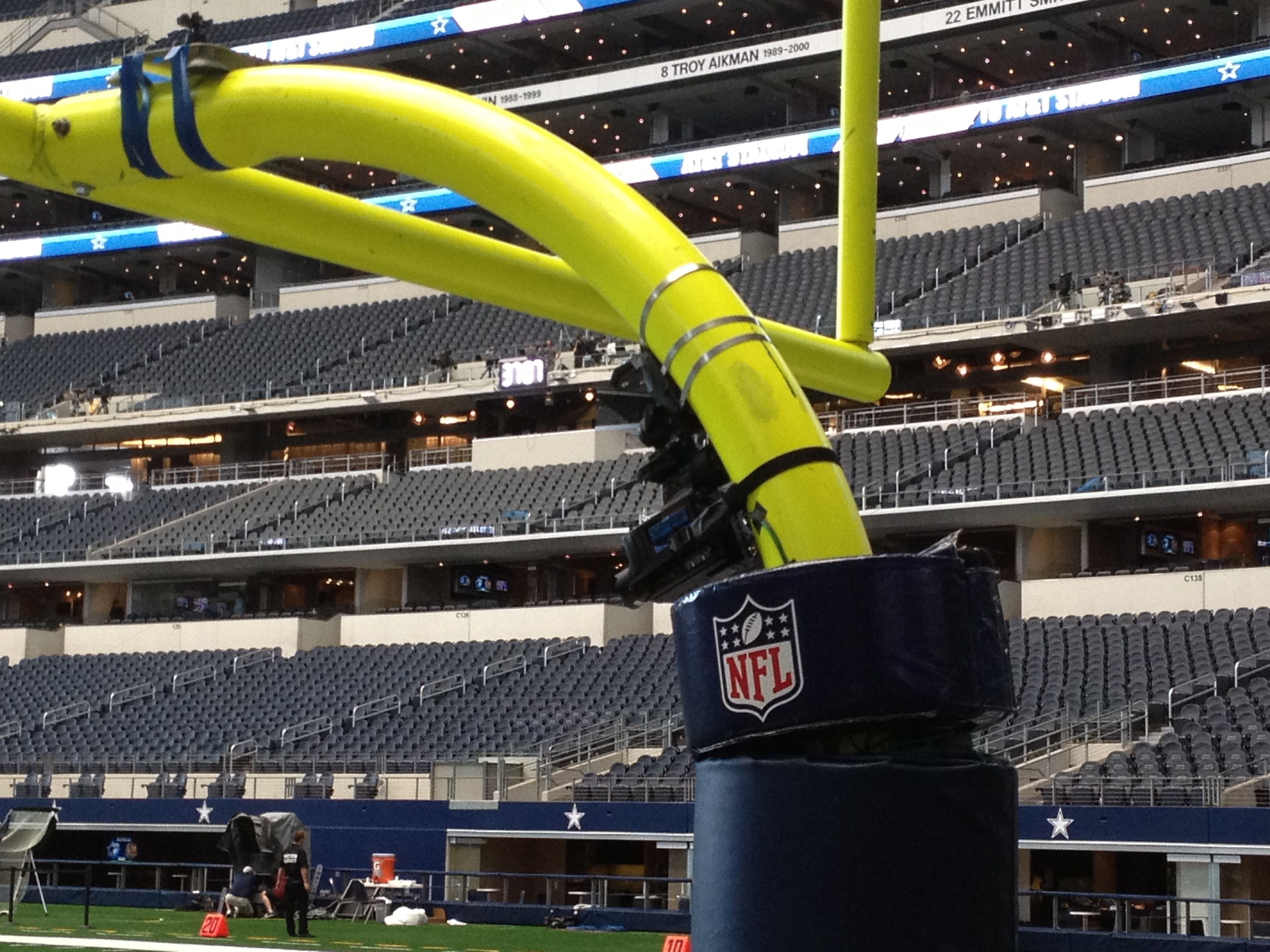 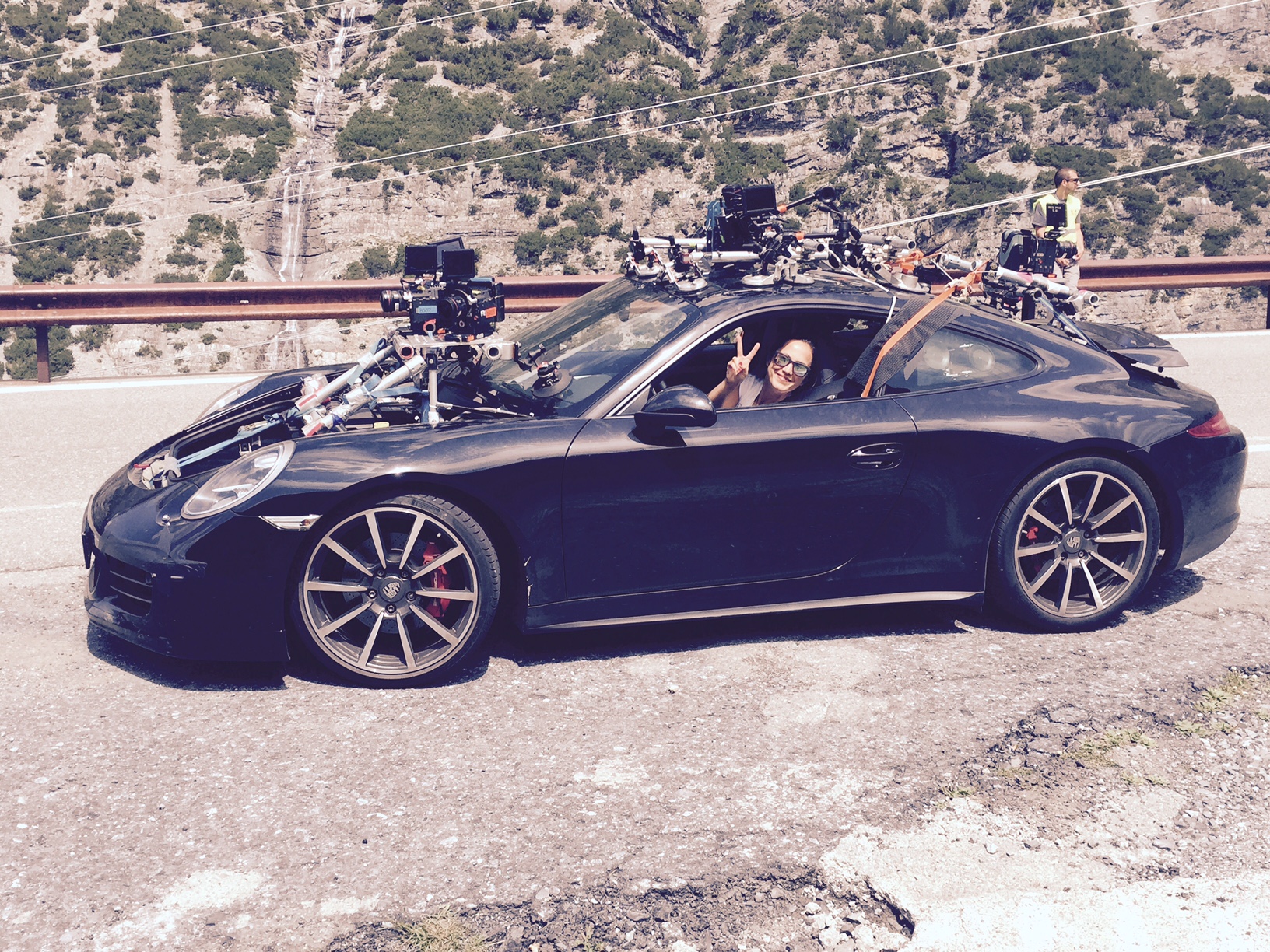 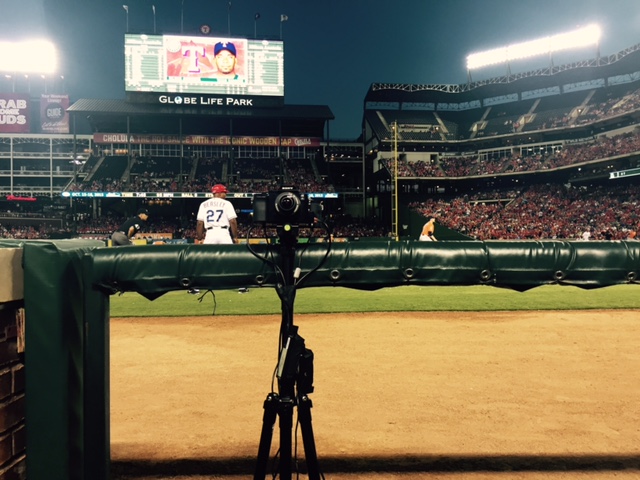 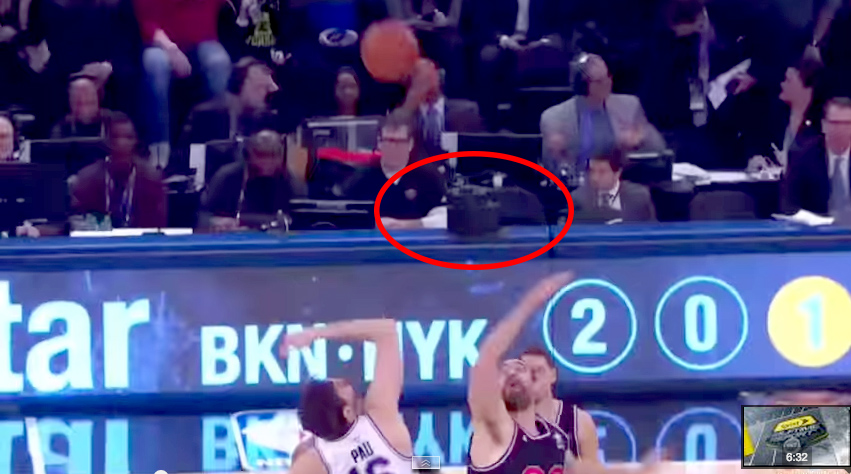 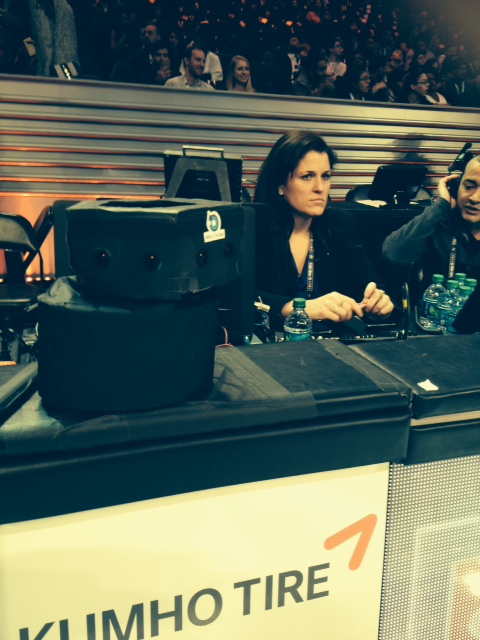 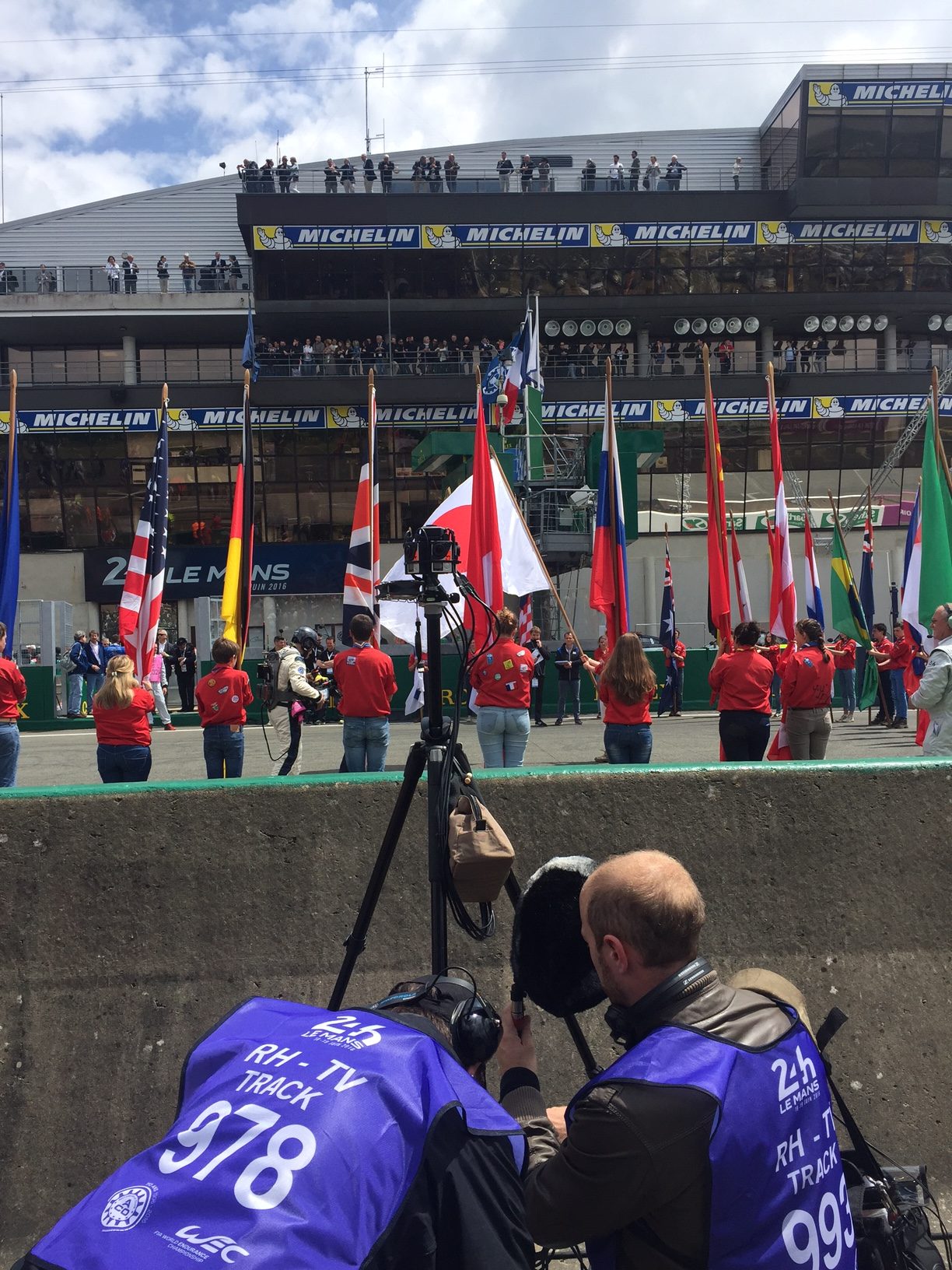 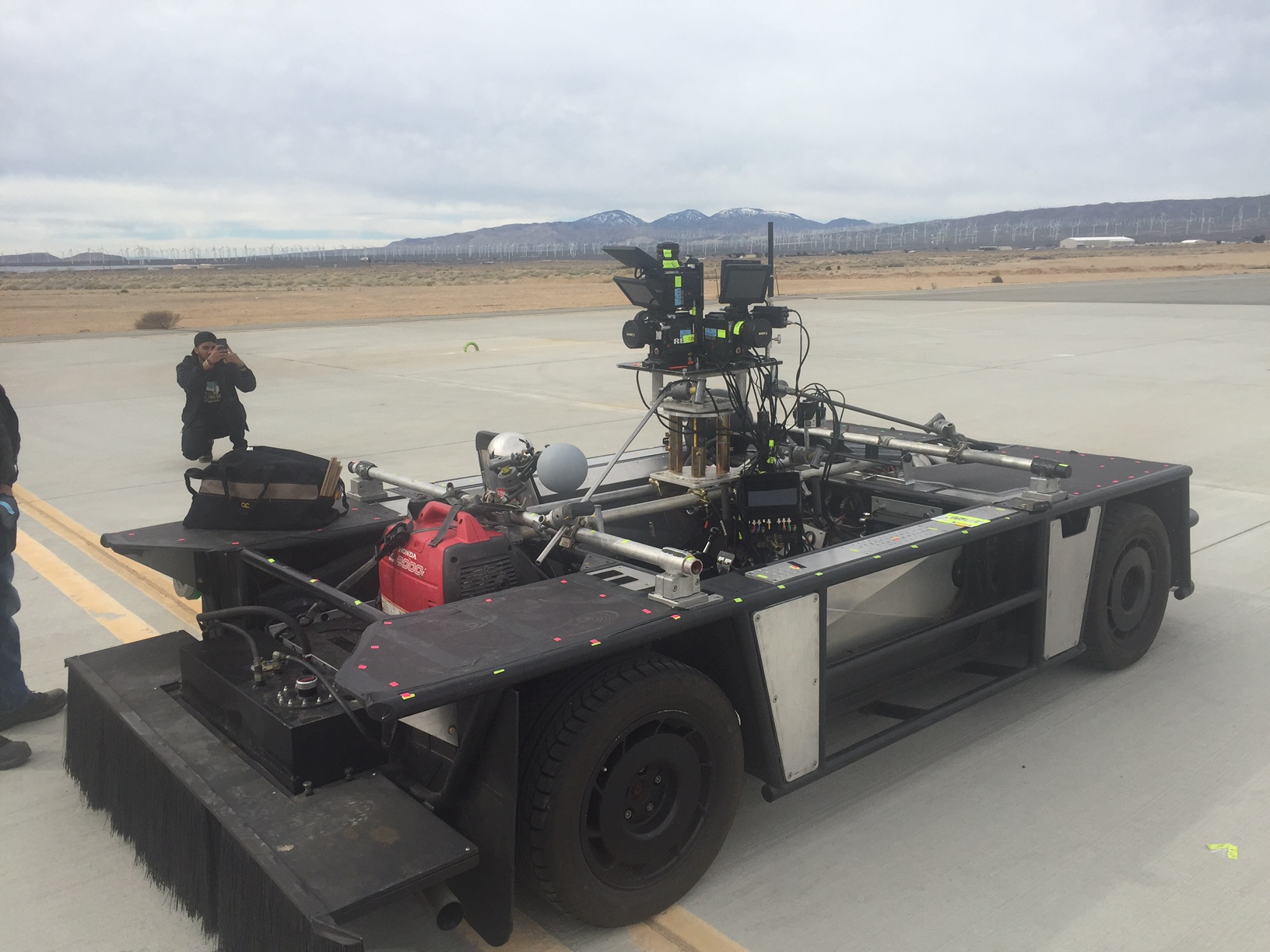 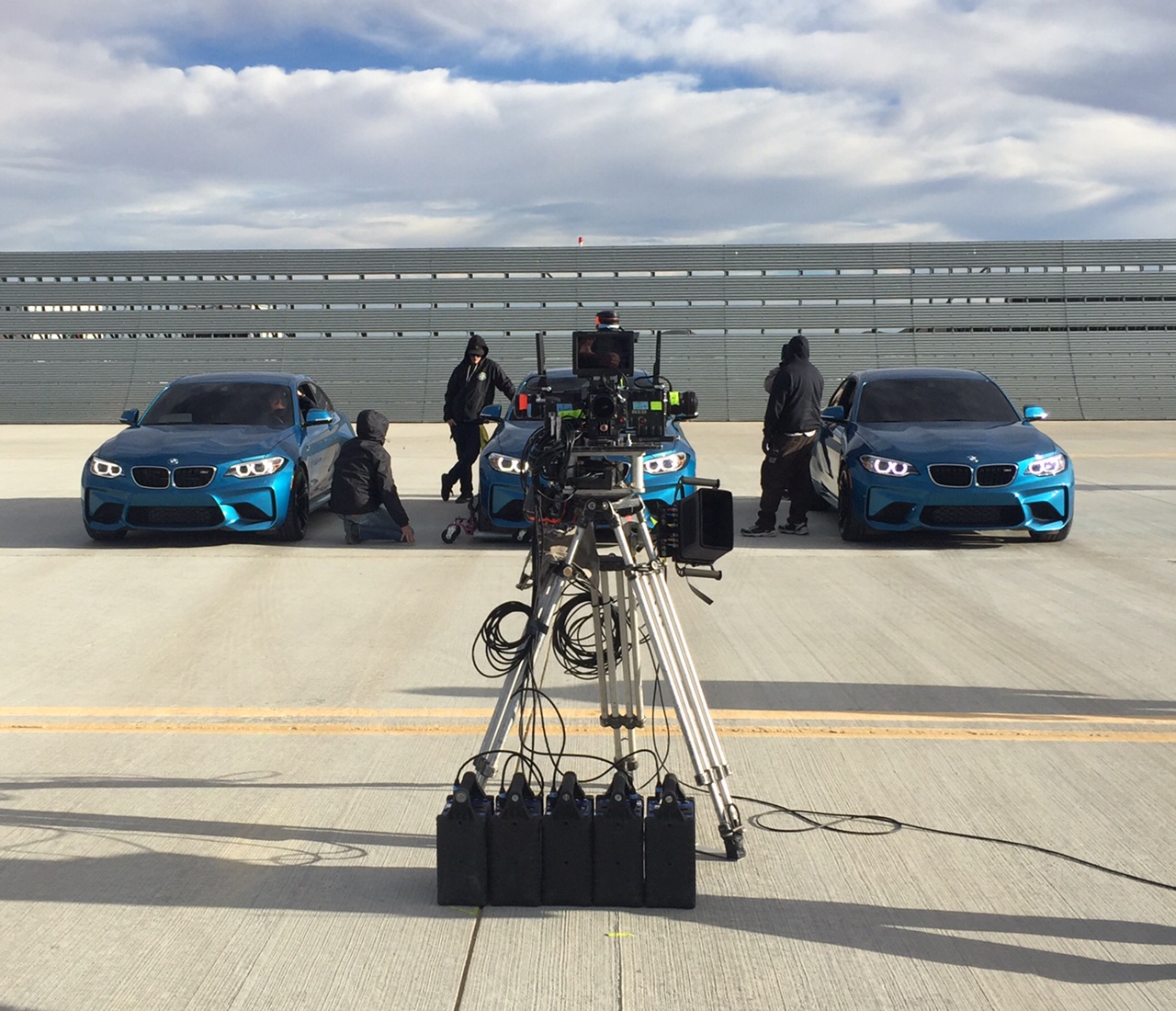 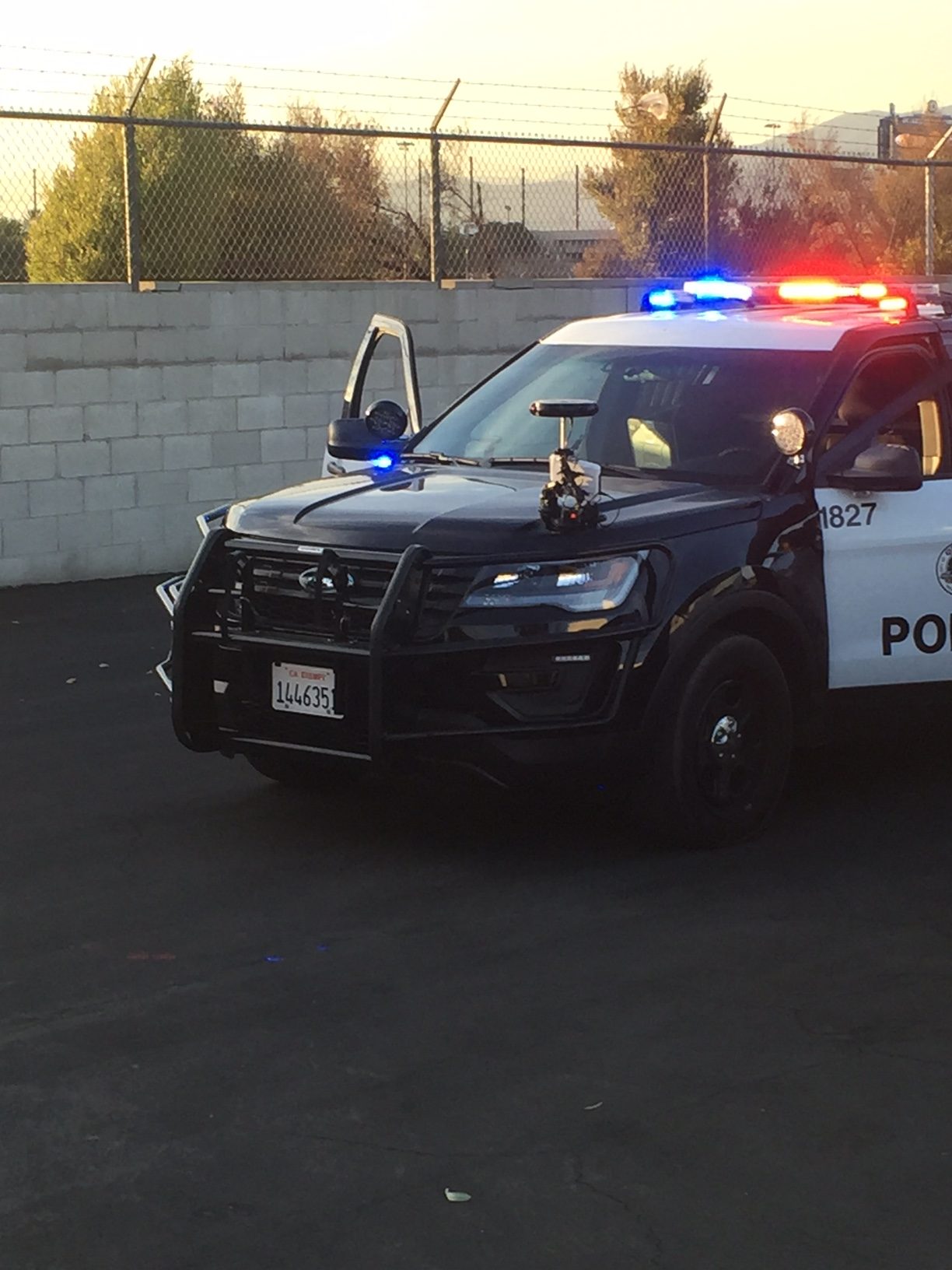 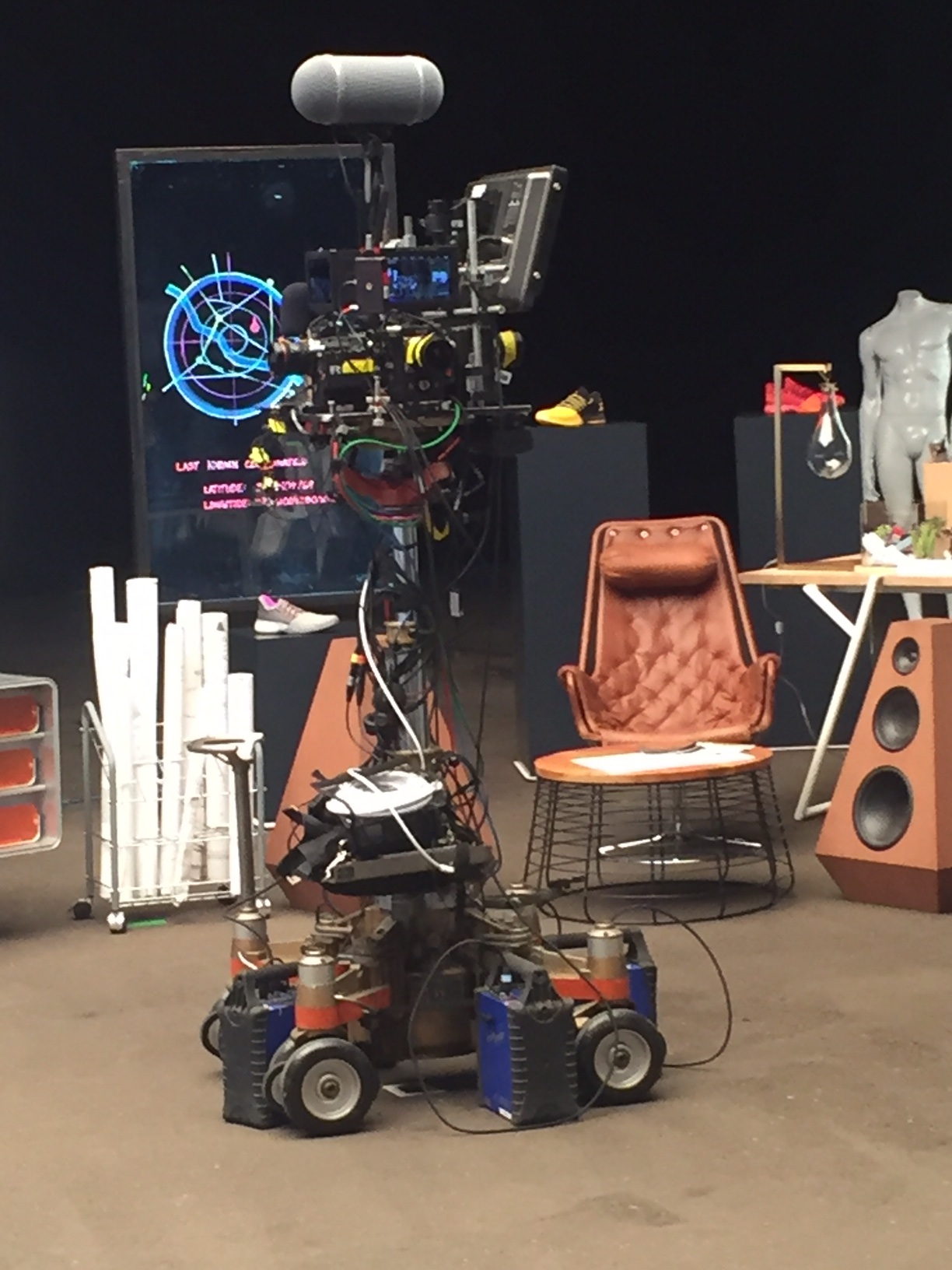 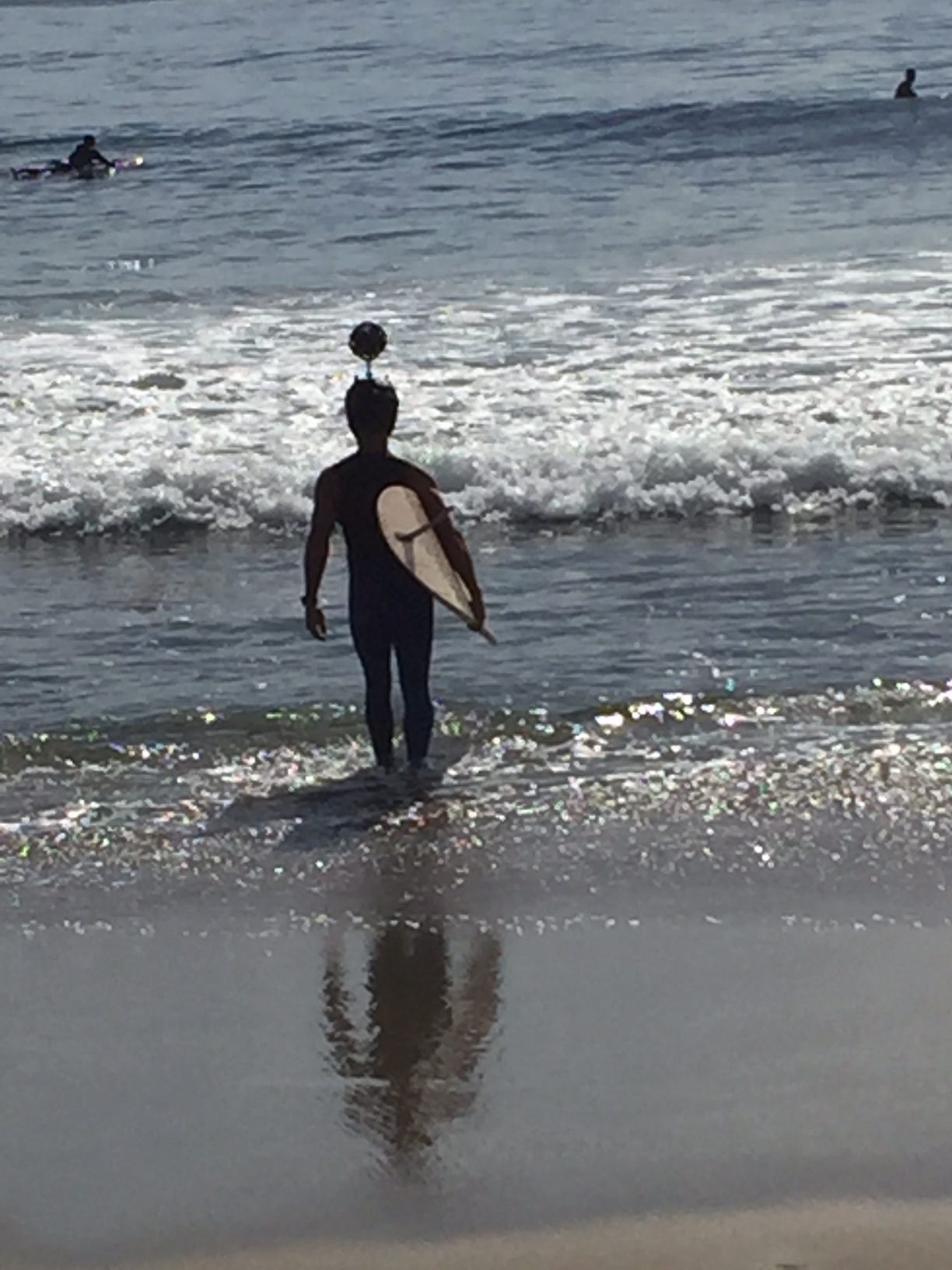 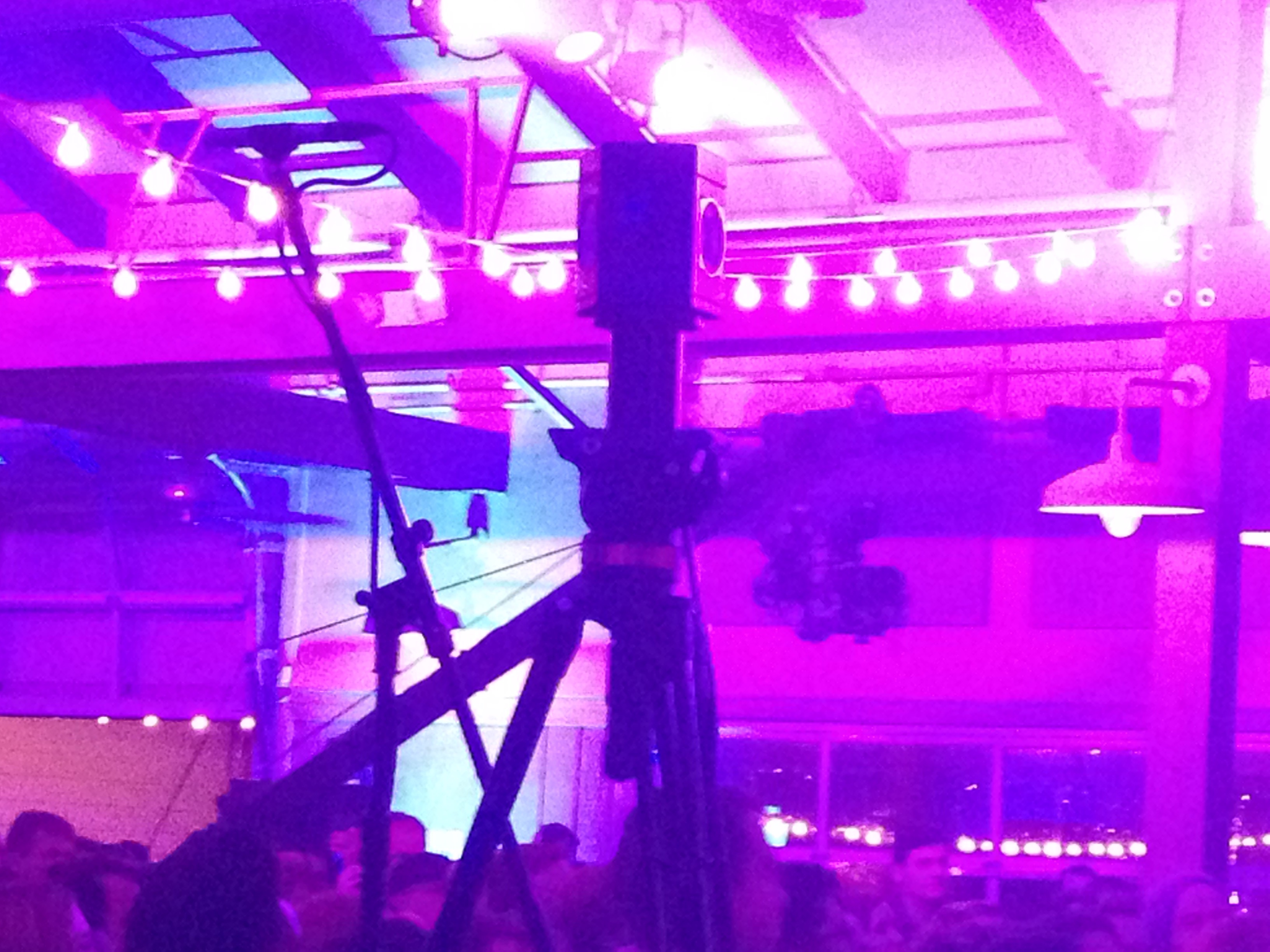 <
►
>
(2001) "This was the second ever 360 video (for Chevrolet) that was promoted during the 2002 Olympics inn Salt Lake City. It is a film camera with a parabolic lens. We need something light weight (still was about 25lbs.!), could run off cam battery and which we could mount the lens. The shoot took place on the actually ski jump used for the Olympics (they cover with snow and ice for the games). We owned the only camera that could be used, so a fall would have killed the project."--Lance

How did you get into the VR industry, especially back when there were only a few producers?

Back in 1990, I moved to Dallas from Washington D.C., and during the move, my computer crashed. Everyone was telling me it was toast, until this kid overheard me talking about what was wrong to a technician and he said he might be able to fix it. I thought it was worth a shot and he actually did fix it by the next day.

He wouldn’t let me pay him, so I took him out to lunch. Turns out, he was a computer genius developing VR code for the Department of Defense. I was so intrigued by what he was doing that I offered to help him with a dilemma. He had some code that was no longer needed to be restricted by the DoD, so I negotiated a license deal for him with a new company in England that was making VR games using HMD’s and pods that you stand or sit which had just opened a NorthThe point of origin where a viewer enters a 360° scene, also serves as a frame of reference for orienting discussions a... More American office in Dallas. Then, the light just went off in my head and I thought, “I need to get involved in this.”

By the late ‘90s, I was working with a VR startup and was approached by GM’s ad agency to do a virtual reality test drive. They didn’t want animation, they wanted it to be more real like film. At the time, 360 video didn’t exist, so I asked them for a couple weeks to explore some options. I talked to some software engineers I had at my disposal then consulted some friends in film that were making music videos and commercials. In a matter of several weeks we brainstormed a way to do a 360 film by modifying a camera, and using a parabolic lens. (We later moved to using a multiple camera array with mirrors).

So I went back to GM in Detroit and pitched our approach which they liked enough to fund the entire project’s development. It took 11 months to complete but we shot footage all over the U.S., added several special effects and edited it frame by frame. The whole experience was really painful–there were no VR tools available back then and we had to build our own camera rig and develop our own post production workflow. We first had to shoot on film then digitize it. That’s how long ago I’m talking about.

But, when all was said and done, we had a 7-minute test drive experience with simulated peripheral components, such as feeling the rumble when you hit a bump or experiencing different scents along the way such as pine trees and roasted nuts. We also added effects such as a heads up display and simulated rain to activate the automatic windshield wipers. It was more like a Disney ride. They custom designed a couple tractor trailers with actual car seats where we housed all the components, similar to a small theater, that toured the US at fairs, malls and dealership grand openings. At that time there was no other way to really get people to experience VR because it took workstation-like computers and early stage VR headsets.

Overall, the program was so successful that they relicensed the experience each year for 5 years. Soon after, we did an actual 120K ski jump for Chevrolet promoting the 2002 Olympics, then another for Pennzoil featuring Jay Leno in his garage with his collection of exotic cars and motorcycles leading to several more.

With no stitching software available we had to do it frame by frame. And the rendering time was enormous. Nor did we have the processing power we have today. When we didn’t have a computer crash, it would takeIndividual instance of a shot; a take = each time the camera is started and stopped. half day to render out 10 seconds of footage! Brad Murano, the genius behind making all this work, he would disappear for days at time painstakingly putting it all together. I got nervous a few times because I couldn’t even get in touch with him for a few days.

We also had to develop much of our own software and integration solutions over the years, because there wasn’t anything out there like there is now. Essentially, we did what we had to do to make it happen.

At the time, only low resolutionThe number of pixels in an image, typically presented as a ratio of the total pixels on x axis to the total pixels on th... More cameras were available, therefore when shooting a 360-panoramic field of viewThe angle of space viewable from a given lens position., it was pretty grainy. But we were able to produce an extremely compelling experience overall. We then continued to push the envelope from designing our own camera rigs to editing and delivery.

That said, what type(s) of 360 camera setup(s) are you using these days?

About 8 or 9 years ago when people would ask this question we’d answer that we are camera agnostic which we are, but we now have many options from which to choose so there is no one answer for this.

We try using existing camera solutions when feasible but even to this day, we still build custom rigs and modify others because we’ve learned that depending on what and where we’re shooting. We know that one type camera or rig isn’t always the best solution.

Therefore, we use the best setupA camera position for a given scene. You might shoot more than one shot from a single set-up (wide shot and close-up). that meets all of the projects requirements, environmental  conditions and stays within the client’s budget to deliver the optimal final content.

You mentioned that the first off-the-shelf 360 video camera started in the early 2000s. What was it?

One of the first to make any impact was from a company called IPIX in the ‘90s, and they specialized in applications for real estate. They used a single camera with a fisheyeAn extreme wide-angle lens, with image distortion occurring at the edges of the frame. lens configuration and the resolutionThe number of pixels in an image, typically presented as a ratio of the total pixels on x axis to the total pixels on th... More was very low.

Another was from a company called BeHere which included a parabolic lens but as you can imagine ran into many problems. The original founders of Immersive Media came up with a beach ball sized camera (later reduced to softball size) with 11 sensors in the early 2000s. It was standard resolutionThe number of pixels in an image, typically presented as a ratio of the total pixels on x axis to the total pixels on th... More, had a lot of parallaxThe optical effect where an object’s position appears to differ when viewed from different positions, i.e. the left ey... More to manage and the stitching wasn’t good.

You also had to carry around a workstation computer to run it and the software was bug-prone, but it was the closest thing to an all-in-one solution.

Having been in the industry for as long as you have, what are some best practices you’ve learned? And, some things that people say are best practices that really …aren’t?

Many best practices are obvious and widely published, however, when it comes down to shooting in very small spaces or tight conditions, moving shots, moving people or objects in the scene and difficult exposures, we’ve developed some very clever techniques to deal with them which gives us our competitive advantage also allowing us to define our own best practices.

We get a kick out of people claiming to be experts and talking about best practices after being in this industry for just 2 or 3 years. There’s a lot of misleading information floating around out there of the best way to do things in VR. We are very transparent and explain what is feasible, what is not, and the best approach to takeIndividual instance of a shot; a take = each time the camera is started and stopped. for each project down to each shot.