Motion shots have always been a bit taboo in the world of 360, but as we learn more about the medium–both from a production and consumption perspective–we’re starting to learn that the right kind of motion can actually improve 360 videos. But, the shots have to be stable and the viewer has to be moving at a normal traveling speed (like, within a car or at a walking pace).

Although a gimbal, like the Moza Guru 360 or 360 Air for professional cameras, can immediately help with shots from a vehicle, capturing a stable shot while walking (without your face being front and center and your arm very obviously holding the gimbal and camera) isn’t the easiest thing to do.

This is a trick I learned from National Geographic photographer Ami Vitale, who was using this trick while shooting her 360-degree panda experience.

It’s nothing more than mounting your 360 camera to a monopod sticking out of a backpack, but despite its simplicity, it’s actually a really handy trick because: 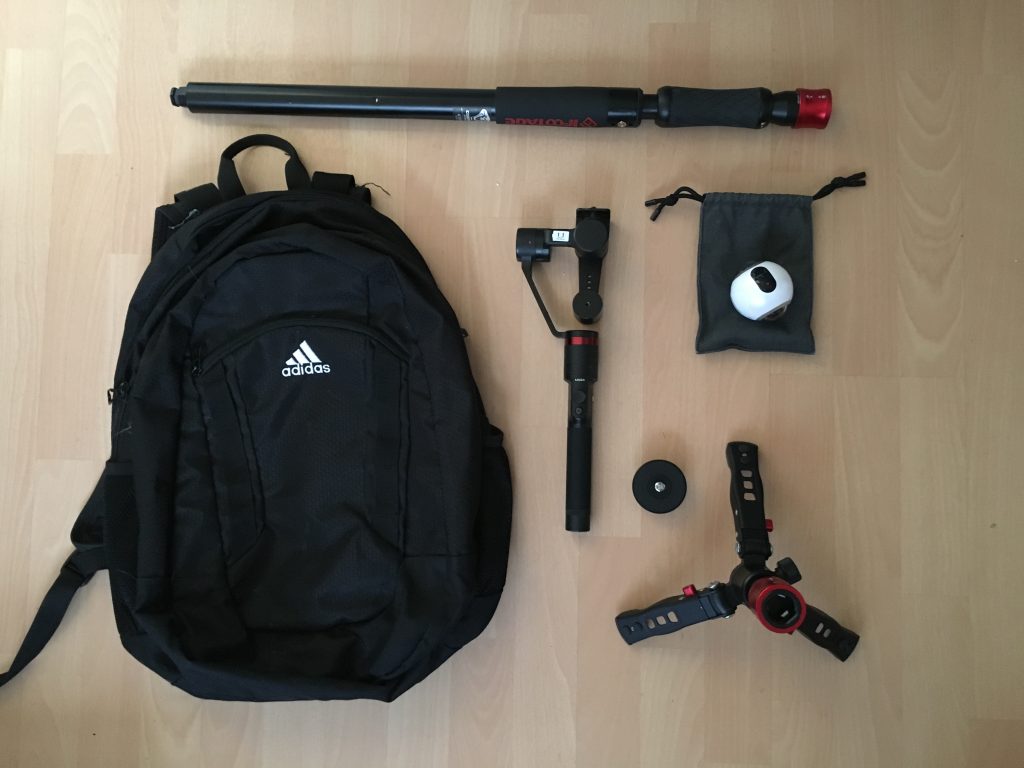 Here’s what I use/recommend for my own humiliator setupA camera position for a given scene. You might shoot more than one shot from a single set-up (wide shot and close-up)..

The Cobra 2 Strike A150S from iFootage is my go-to monopod for pretty much everything I do in 360, because it’s fast and easy to use and very stable, but it’s also extremely versatile.

You can read my full review here, but part of the monopod’s versatility is its use for my humiliator setupA camera position for a given scene. You might shoot more than one shot from a single set-up (wide shot and close-up).. If I attach the feet of the monopod and extend two flat, leaving the third unused, it sits in my backpack perfectly for an overhead shot. Or, if I remove the feet altogether, I can shift it to the side for more of an over-the-shoulder shot.

Although you could make your own humiliator setupA camera position for a given scene. You might shoot more than one shot from a single set-up (wide shot and close-up). without a gimbal, using the Moza Guru 360 gimbal on top of my iFootage monopod saves me so much time stabilizing my footage in post. So. Much. Time.

Another great thing about this camera is that it can be controlled remotely with your smartphone to reorient the camera or change gimbal mods.

This gimbal is also built for 360, so as much of the gimbal as possible is oriented in the stitch line to minimize its appearance in your final video. You can read the full review of the Moza Guru 360 here.

Your 360 camera of choice

For this example, I used the Samsung Gear 360 2017, which does not have internal stabilization. However, the gimbal can support most consumer 360 cameras. You could also maybe get by without the gimbal if you’re using a camera with internal stabilization, like the Insta360 ONE or Garmin Virb 360, but your results will probably be better if you use the gimbal even alongside those cameras.

To learn how to put together your own humiliator, watch the video above.

If you come here often, you probably know that we love what we do! And if you love what we do, too, please consider purchasing your kit through the links we share on our site and help us continue to share the latest news, reviews and resources for all immersive shooters.