But in August 2017, E.W. Scripps launched a virtual studio with “immersive mode” in the hopes of defining a style in which to broadcast 360 without losing its cool factor. 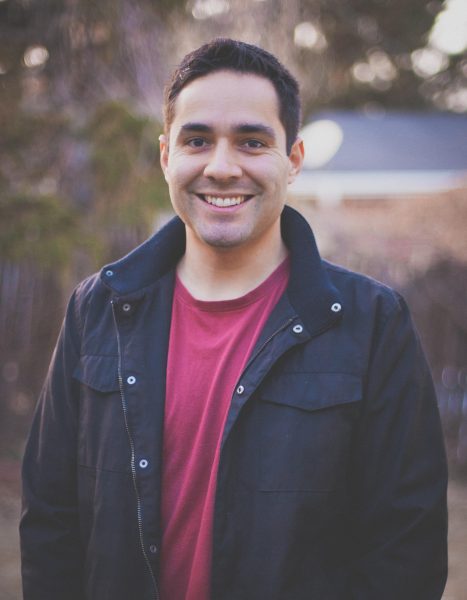 Scripps’ National Technology Coordinator Socrates Lozano sat down with Immersive Shooter to share their goals for the virtual studio, how they’re motivating and training newsrooms to tackle 360, and the best minimalist 360 kit for quick-turn deadlines.

How did E.W. Scripps first get started with 360 content?

Myself and our Executive Producer of Content Sharing started looking into 360 maybe a year ago. That’s when the tech started getting to the point where we thought it was a good time to jump in. Our Executive Producer of the National Broadcast desk is all about experimenting, and she supported the effort with a few stories and experimenting with the medium on broadcast.  Shortly after we just started our Champions Project where we funded seven stations to purchase cameras and we train them, and the requirement is that they produce one unique 360 story per month that can be shared throughout the whole country. Everything beyond that is free rein.

How does the Champions Project feed back into your broadcast goals?

360 video is traditionally thought of as a digital tool. It’s not thought of as a broadcast tool. What we’re trying to do is use it on digital, but also leverage it on broadcast. So, every piece has to air on broadcast in some way. We’re giving stations presentation ideas, but we aren’t limiting it.

We want to show examples, but we also want them to innovate. We don’t know what or how people want to consume this content. So, how the stations do it is up to them. We’re giving them a foundation, but it’s their job to build the house.

What do you think will work, to deliver 360 content via a traditional broadcast? What is your strategy there?

When you convert 360 video into fixed frame, it looks low res and there is nothing special to the video anymore. With the support of our VP of engineering we were able to build a virtual set at our National broadcast news desk in Denver to help us handle 360 stories, with an immersive mode. It also has a curved robotics track to help sell the fact that everything is three-dimensional. And, in the middle of the 360 video, you can have the presenter. This provides a great show and tell opportunity while the camera freely moves in 360 space.

Here is the original 360 video:

And here’s how it would appear when broadcast:

The time and tech it takes to deploy and to succeed at something like that is a lot of work, but we want the viewer to really see it. That’s how this conversation ultimately started. We knew there had to be a way to display 360 so it’s special again. But, we have no idea how the audience will react and if they’ll like it.

But, 360 is just one portion of the virtual set. It also has a monitor wall for storytelling purposes. It’s huge and all the pieces can move freely so you can takeIndividual instance of a shot; a take = each time the camera is started and stopped. them and fly them around the set, or you can build off of them, with up to 19 sources of video through them. So, you could put video up on the screens and the camera can move along the track and follow along with the reporter from monitor to monitor. It also has augmented reality features to show anything statistics-oriented stories as well as augmented segments.

The reality is broadcast news is slowly but surely seeing a decline in viewership, and that, to me, means we can’t be a one-trick pony. We have to experiment and push all boundaries.

How did you prepare those newsrooms to produce 360 video?

But what I’ve found is people’s’ confidence levelsThe adjustable sensitivity settings of microphones. Levels are set (and changed as necessary) to best capture the vocals... More are really low when it comes to new tech. Everyone feels lost about how to get started, but we’re telling stories on a daily basis. You can treat 360 the exact same. The only difference is if you’ll be in the story or not. And, if you are, you have to make sure it’s relevant that you’re there. If not, let them experience the story.

The way I approach 360 from a local news station, is every year there are some pieces you’re doing over and over: the state fair, the city council meeting to swear in new officers. You can think back to what you did last year and how to do it differently this year, and 360 is a big opportunity to help keep things fresh.

We communicate with stations with Microsoft Teams so they can learn about the projects others are working on, have general discussions, schedule calls for training or to answer questions, share story ideas. It also houses a newsfeed of industry info and tutorials and training videos that we created in house.

What’s in their kit, and why?

This is what the studio looks like without a 360 video “sphere” encircling the on-camera talent. The idea behind finding a way to broadcast 360 videos was to encourage newsroom teams to produce more 360 content, knowing it would still benefit the main broadcast.

We know they’re probably going to be under deadline, so we gave them Insta360 Nanos. They shoot at a low bitrate, they’re self-stitching and they can livestreamDistribute video playback in real-time..

Once they’re producing content and doing well with those cameras, then they’ll be upgraded to a more robust cameras, like Insta360 Pros. We like the Pros because they can shoot unstitched video and stitched video up to 8k resolutionThe number of pixels in an image, typically presented as a ratio of the total pixels on x axis to the total pixels on th... More, so if you need to get something out immediately, you don’t have to stitch it. Every project I’ve done, I thought I’d have more time and than the deadline moved up. So, that flexibility is key.

For audio, they have Rode SmartLavs paired with Zoom H1s. With traditional broadcast newsrooms, they have their broadcast cameras so if we don’t provide them something specific to record audio with, they’ll revert to that. You can get that kit for $169 and you can hook the interview subject up and put it in their pocket.

Are you also using the same kit? 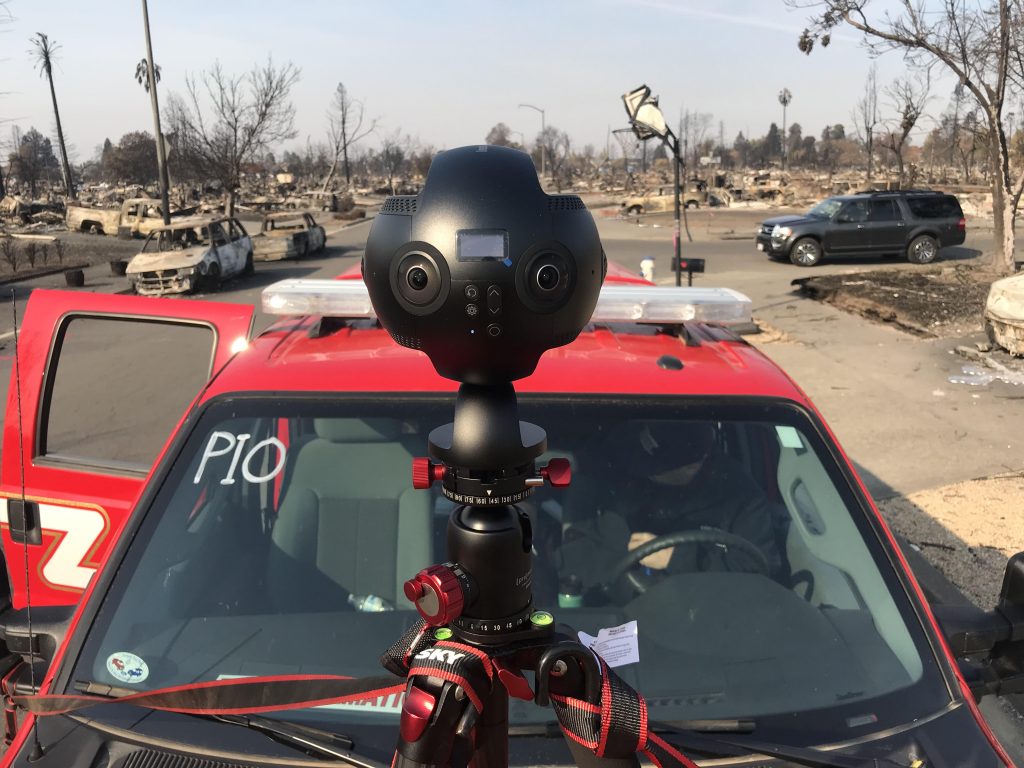 Lozano used the Insta360 Pro for E.W. Scripps’ coverageMultiple shots from multiple angles to capture the events in a scene (i.e. master shot, medium shots, close-ups, inserts... More of the California wildfires, which it also broadcast on TV with its new 360 video studio.

No, I’m experimenting with a few cameras: the Samsung Gear 360, which is a a bit more labor intensive on the workflow side, the Insta360 Nano, the Insta360 One, and now the Insta360 Pro.

I’m a minimalist when it comes to 360. I love that I can put everything in a backpack and I’m good to go. Plus, 360 takes longer to create, I want things that can move quickly with me. They need to be small and compact. Everything I bring fits into a carryon bag. For my tripod, I use a MeFoto tripod and I don’t worry too much about hiding the legs. When you use the insta360 pro camera the legs barely even show.  For audio, I just use my iphone with the Rode SmartLav for interviews and the Gear’s internal mic for nat sound.

The only difference between their workflow and mine is how they convert footage. With the Nano, they’re using Insta360 studio to convert footage to MP4 and then they bring it into Final Cut Pro. I’m excited about Apple’s recent announcement about FCP hiring Tim dashwood 360 toolbox developer and about Adobe acquisition of Mettle Skybox, but the cameras seem to be coming out a dime a dozen. What’s important to me is a camera that can help me do what I do, while maintaining quality and allowing me to work faster.