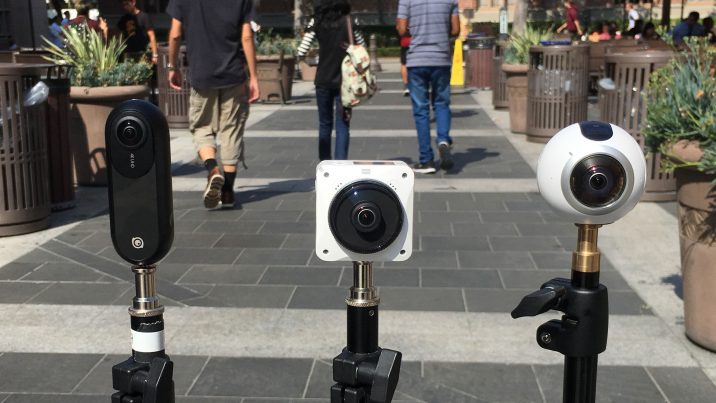 With these cameras hovering around similar price points, we wanted to do a quick shootout to see how the Insta360 ONE, the KODAK PIXPR0 Orbit360 4K and the original Samsung Gear 360 cameras compare.

Here’s the footage shot on the University of Southern California campus (in alphabetical order).

This footage was stitched using the InstaStudio, which is free to download for Mac or PC. https://www.insta360.com/download/insta360-other?inspm=77c1c2.89f76e.0.0

Like the majority of Insta360’s software and apps, this stitching platform is relatively easy to use. It has the ability to place a custom logo below to cover the tripod/monopod, but the ability to adjust the vertical lines is missing (You can see some crookedness.)

Stitch line is decent. You can easily convert the default .insp to .mp4 by simply renaming the extension, which means these files can potentially be stitched on a third-party platform, increasing the quality of the stitch.

Here’s another sample, stitched with the camera’s companion app:

This footage was stitched using the PIXPRO 360 VR Suite, which is free to download for Mac or PC. https://kodakpixpro.com/Americas/support/downloads/ While you can stitch via the mobile app, using the desktop software was the recommended way to process the footage.

The interface for the stitching platform was less intuitive, but this tutorial video walks you through it: https://youtu.be/A0EuHe0m4SE

This footage was stitched using Kolor’s Autopano suite, which goes for several hundreds of dollars is obviously much better than the unusable Action Director software that comes bundled with the camera. Stitch from within the camera is an option, but the stitch linesThe seams in a 360° video where footage from one camera has been combined with another. are more visible.

Of course, you are also required to have a Samsung phone to truly unlock the best features.