With 4K video quality, groundbreaking features and a reasonable price, is the Insta360 ONE “The One” we’ve been looking for?

The camera is almost The One–and probably is for a lot of people–but it isn’t without its flaws. 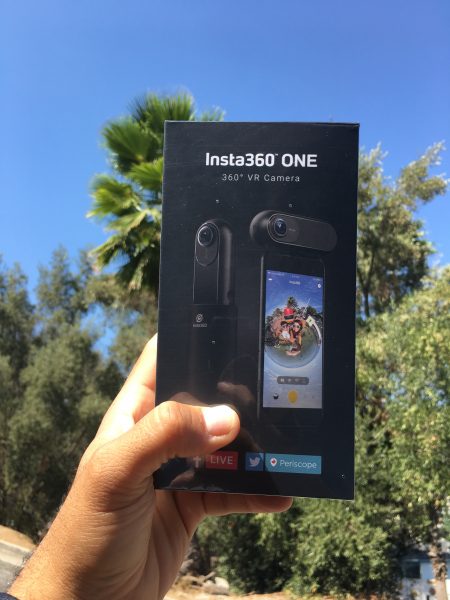 First, I am a huge fan of the Insta360 camera lineup (the Nano is the 360 camera I carry with me at all times) and I have always had an honest and frank relationship with the company. They even rushed my order so I could demo the camera during the Excellence in Journalism (here was my first bullet-time video).

Second, they have noted my feedback and have hinted that these might be addressable in future app updates, but no promises of course.

So, let’s start with the positives – and this camera has plenty of those.

Keeping in line with their other pocket/phone cameras, using the ONE is extremely simple.

After unboxing the camera (you can see some photos here), I plugged it into my iPhone 6S Plus and, like the other Insta360 cameras it prompts you to download the app or launch it if you already have it. 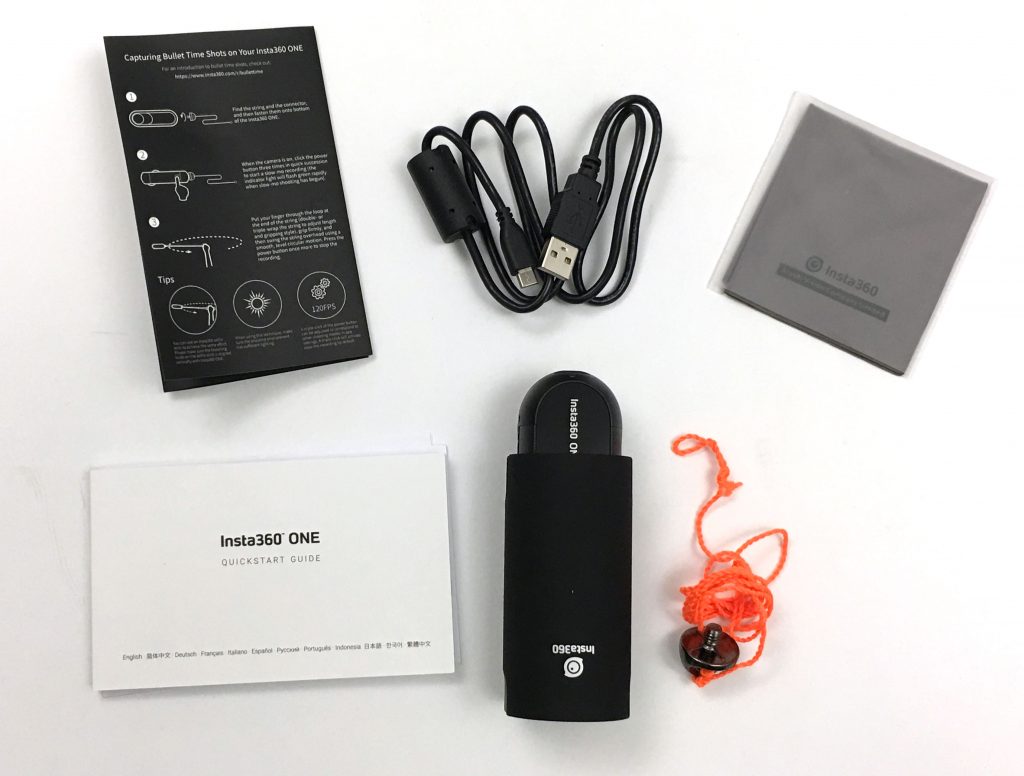 The ONE uses the same easy and intuitive design like their other Insta360 apps.

The in-app stitching is pretty good, especially compared to other self-stitching cameras. It has an external MicroSD slot, so you can stitch video via their InstaStudio platform (which I did below, with better results, during a little camera shootout we’ll be sharing shortly).

Here’s another sample, from Ivan Lahara, capturing 60 fps at 2K:

And another from Ivan, testing out the camera’s internal stabilization, captured at 4K and sped up:

And here’s another sample from the ONE, shot by Ivan Lahara, at 4K. It’s also a good example of the camera’s internal stabilization and low-light performance:

On the site, it says the camera outputs the following photo and video formats: insp, jpeg, RAW, insv, MP4 and LOG.

🔑One quick pro tip🔑 is, if you want an MP4 file, simply rename the .insp to .mp4 and you are done. Seriously.

Because you can get the MP4 file, you can technically stitch via third party, but I didn’t have the template needed to stitch correctly in Kolor’s Autopano suite.

The buzzy, popular party trick that you have all seen in their marketing is the “bullet time” feature and it’s pretty neat. Everyone I showed this camera feature to – from newbies to 360 veterans – really liked the idea.

Although the bullet time feature might seem like an overhyped 360 selfie, it actually has more potential than just a party trick.

Eric Cheng (Facebook’s head of immersive media) has been experimenting with the feature and posting his findings. Among them, he’s found a way to use the motion of the camera to make bullet time videos stereoscopicVideo shot with two parallel cameras (or in the case of 360° video, multiple pairs of parallel cameras) Commonly referr... More by offsetting the footage for the second channel by one frame. He’s also been using Pix4D to create 3D moels from his bullet time videos. Although the results aren’t particularly clear, it’s an interesting potential use case for down the road.

For me the most impressive feature is their post capture 360 to 2D “flatty” video thingy (FreeCapture, if you want the real name) that is hard to explain.

Here goes: After you capture a scene in 360, you can “re-capture” the video through a video game-like interface where you can compose and control a traditional video frame by toggling a zoom in/out button and using a “magic windowA method of viewing 360 content where a rectangular frame acts as a portal to the larger, spherical recording. The viewe... More.”

In other words, it captures and creates a 2D/flatty based on how you watch the 360 video via magic windowA method of viewing 360 content where a rectangular frame acts as a portal to the larger, spherical recording. The viewe... More and your choose of settings.

The camera’s “invisible selfie stick” and its ability to keep the horizon flat when oriented at any angle make this “flatty” feature particularly useful for getting unique angles, particularly for vloggers. But, even though it boasts 1080p video quality, the FreeCaptured videos don’t evenly stack up to the video quality we’re used to seeing for traditional video. You can see this better in Lok’s review.

You can operate the ONE independently from your phone, like a Ricoh Theta, via Bluetooth or by pressing the button once for photo, twice for video and three times for bullet time. 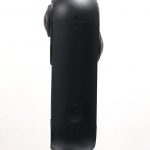 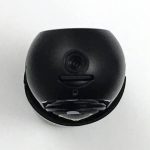 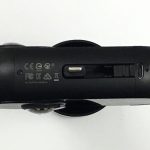 Now for the not-so-positive things.

Although you can see your preview video when the camera is attached to your phone, as of right now, you cannot preview your video remotely as you record like you can with the original Samsung Gear 360 setupA camera position for a given scene. You might shoot more than one shot from a single set-up (wide shot and close-up)..

This video from Insta360 can easily get your hopes up:

While you can control what you will shoot (photo, video or timelapse), you can’t see what you are shooting. When capturing a photo via Bluetooth, you’ll get a little thumbnail and the app will tell you “Capture completed! Please plug in ONE to review,” but for video, there’s no thumbnail. The only indication you’re recording is the yellow icon. 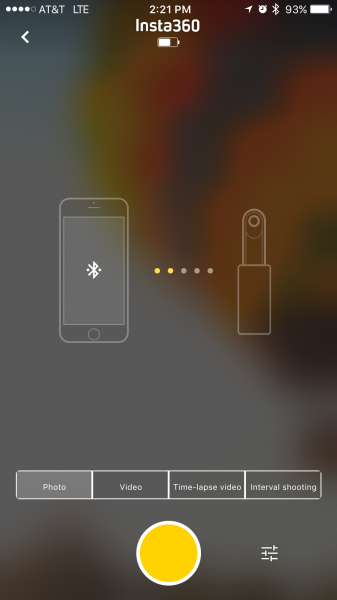 After connecting to the ONE easily via Bluetooth, this is the screen you see.

And what’s worse is that you can only see your footage or photos when you physically attach it to your phone through a flip-out lighting connector.

This, for me, is a huge flaw. The original Theta allows you to see your content remotely, although it does takeIndividual instance of a shot; a take = each time the camera is started and stopped. a while to transfer, which could be why this feature isn’t included.

But we know that feature is possible because the original Samsung Gear 360 allowed for preview, viewing and stitching over Bluetooth.

I know it isn’t a small feature request after launching, and I may be kidding myself, but I feel like this could be possible maybe through an app/software update.

Here’s another issue: the camera doesn’t stay in the phone. It easily slips out of the slot, so make sure you download the video from the camera before using the FreeCapture feature or you will get increasingly more frustrated when the camera disconnects.

Ivan Lajara, from the Daily Freeman, came up with this solution: 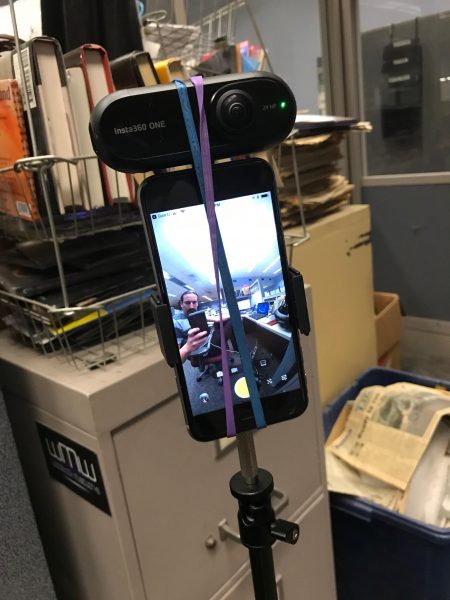 Pro tip from Chad Davis at NETNebraska: Use a lightning dock extender to help preview shots during setupA camera position for a given scene. You might shoot more than one shot from a single set-up (wide shot and close-up). and review footage after shooting, without removing the camera from its tripod.

The camera is only for iPhones at the moment, but Android will be coming soon.

The camera and its accompanying app, like the other cameras from Insta360, does includes valuable features like solid internal stabilization, live 360 streaming (Facebook, Periscope, YouTube and more) and the social animation features you’re used to if you’ve been using the Insta360 Air or Nano.

It also has some accessories available (sold separately) like a drone mount and waterproof housing (yet to be released).

It’s also worth mentioning that Insta360 really has invested in building a community of creators, including a Insta360 ONE user Facebook group.

So, should you buy it? Here are my final thoughts…

Although Insta360 never claimed this was a pro camera (although some features like LOG format, which I haven’t yet played with, led some to believe it could be), this may not be the right camera for journalists producing 360 stories due to its lack of preview/viewing features.

Despite its flaws, it’s a solid starter camera for someone just getting started and also for pros who want something small and simple to carry in your pocket at all times that also packs a few fun party tricks.

All that said: Is the ONE “The One” for you? Let us know in the comments.