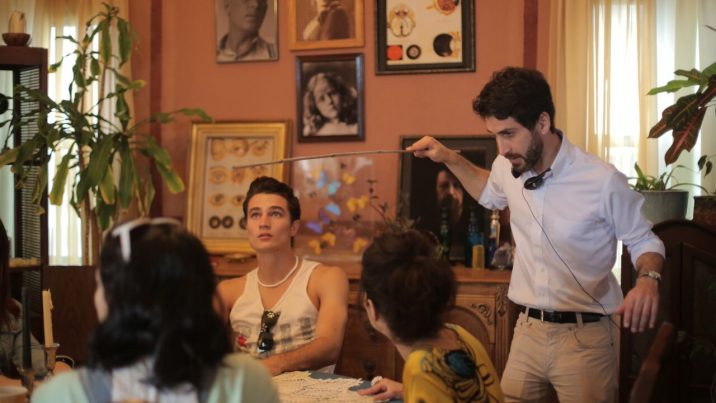 Petridis, right, on the set of Eye for an Eye.

This week, Immersive Shooter spent some time chatting with Fever Content’s Elia Petridis, whose piece Eye For An Eye: A Séance in Virtual Reality is now available on Jaunt’s “360 Degrees of Horror” playlist on its new YouTube channel (which we highly recommend if you don’t have other plans on this most haunted of nights).

From developing emotional blueprints for VR experiences and what ‘flatties’ can learn from 360 production, to reactive audio and incorporating gaze triggers, this Q&A may not horrify you, but it will certainly delight.

What was your inspiration for this particular piece?

When tasked with pitching creative for a scary VR film, I went back to the kind of horror I love and stuck to it. There were some modern influences like IT FOLLOWS which reminded me how much I love Sunshine Noir. That film borrows a bit from Lynch in the way it creates a world with its own logic. In terms of art and production design, references to the ‘80s, and weird prop artifacts that don’t quite belong, the Eye For An Eye universe takes a cue from that sort of approach to create gibberish film logic. 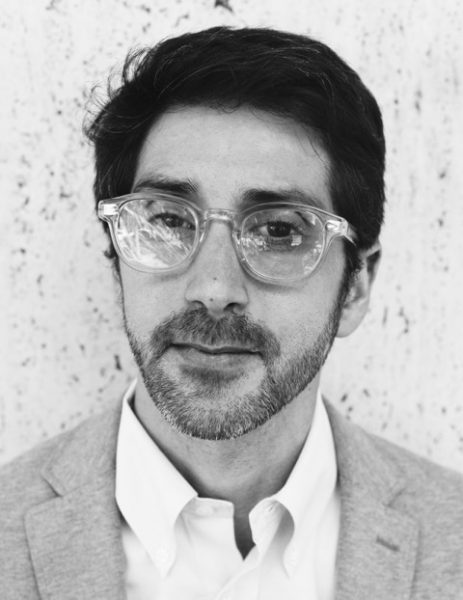 I also adore modernist ‘70s filmmakers so I gave some thought as to how they would have approached it.  And it came to me that this was the birth of a medium. And it came to me that this new medium was colliding with the genre of horror. What were the implications of that? I felt obliged as a bit of a unprepared historian to make the piece about the very horror of the medium itself. Someone had to do it. Someone had to point out that when you engage in virtual reality, you are seeing the world through someone else’s eyes. You are trying on someone else’s point of view. And so Marcus the eyeless ghost was born. He wanders the afterlife because the way he was killed left him eyeless and lost in limbo. He makes us reflect on the horror of you and me being part of a VR audience. When we hunt for good VR, are we not all looking “for the perfect pair of eyes to cross over to the other side”?

What sorts of props do you feel don’t belong, and what effect do you think this establishes?

Alongside this piece, I did a short film, Eye for an Eye: Henrietta. You don’t need to see one piece to understand the others, but when you see the blue car at the far side of the street in Eye for an Eye: Marcus, where the surfer kids are, you know how it relates to Henrietta. The surfboard on the porch also has to do with that film. If you see the short, it feeds back into your experience in Marcus’ story.

What camera did you use to film the piece?

We used four GoPros in a circle. It was very rudimentary. Now, we’re focusing on volumetric and audio reactive environments. At this point, when I watch Eye for an Eye, I think ‘Cool, man, that was old school!’ 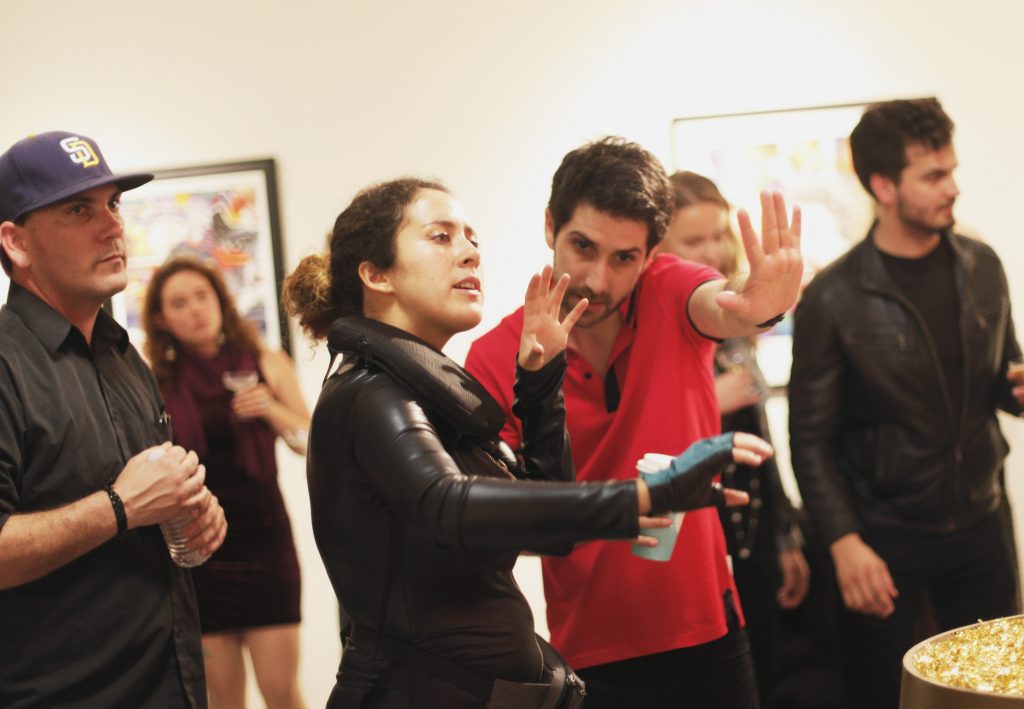 Can  you talk about some of the creative choices you’d made to improve embodiment?

The practice of “inclusion” was embraced. This is when the characters address you directly in the experience. They feed lines to each other past you. They bump and scare alongside you. For me it was important that this felt like a group of friends, yourself included, that had known each other for a very long time. There had to be a sense of familiarity. It’s also important to figure out how to make the limits of this experience, which made it quite passive, into something active that had agency. Inclusion helps with that because when you are addressed then there’s a you, and when there’s a you, then there’s something at stake! That’s very important in VR horror. The protagonist being at stake is scary, but yourself being at stake as a character is even scarier.

What did you learn about what does and does not work when trying to establish that embodiment?

What was your previsualiziation process like for this piece? 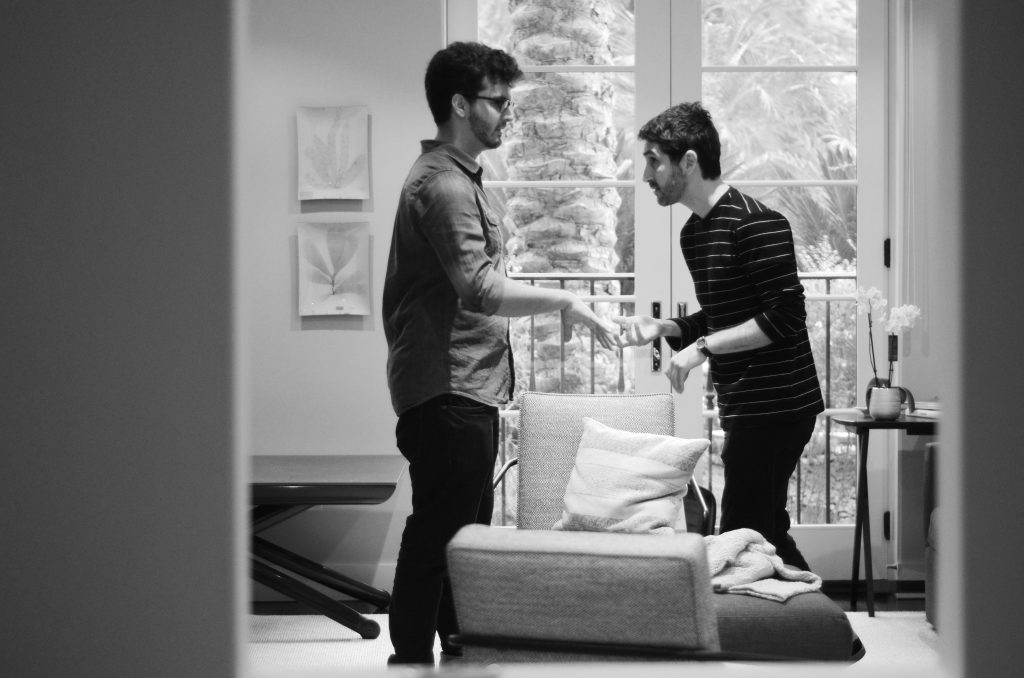 I color coded the script so the reader knew where they were supposed to be looking while reading the experience on the page. That’s the job of a screenplay, to help you imagine the film the fullest way you can before you shoot it. So I figured a VR script shouldn’t be any different. The color coding also helped guide us when blocking the actors on location.

For example, when Marcus bounces around the room, it’s written like ‘Marcus red bounces black around the room yellow,’ with each color meaning one wall of the room.

Right now, something that’s really important to me is to create an emotional blueprint for an experience. So, I’ll put on blank goggles and mimic the experience and come out with an emotional blueprint–whether it’s narrative or music–and I’ll know how I want someone to feel throughout the piece. For example, I want someone to feel anticipation from 0 to 23 seconds in, and trust from 23 to 40, and so on. As you plan out everything else, you can always go back to that one word. The color coding is important, but that emotional blueprint is just as valuable. 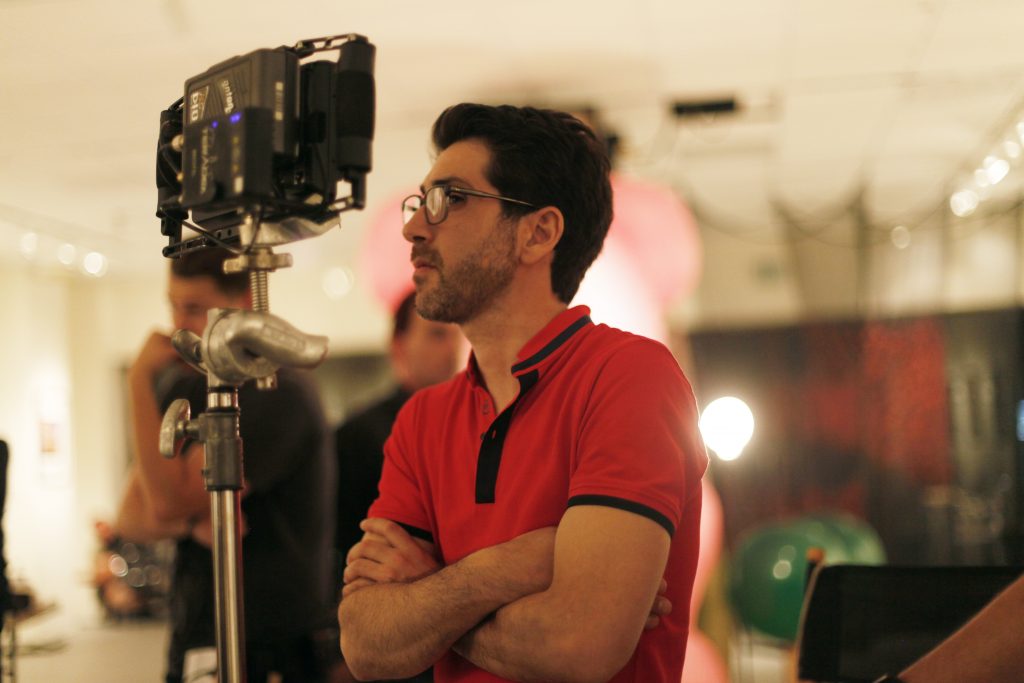 And the kicker is I now use that for flattiesSlang for traditional, 2-D videos.. Some of the stuff that VR is inventing will wash back to traditional filmmaking. Like, in Boogie Nights, in Dirk Diggler’s room, the camera pans 360 degrees around the room to find Dirk at the end of the panSet the position in space for where audio appears to originate., and in that panSet the position in space for where audio appears to originate. you get everything you need to know about the character. Not through dialogue, but through the location: his posters, what’s in the drawers, just the bedroom of this teenager. The space becomes a character. Now I find myself asking how much I can tell with pure space, so it puts more focus on wardrobe and location and objects because in a way the prop manager is becoming a storyteller. And that feeds back into hiding those props from Henrietta in the Marcus experience. You give those pieces meaning.

Did you consider using videogrammetry to scan in a body to actually sit at the table and place their hands around the candle to achieve even more embodiment? Why or why not?

When this was made, that technology wasn’t in the mix. We just problem-solved on the fly. The way people get an extra layer with this experience is when we show it out around town and we takeIndividual instance of a shot; a take = each time the camera is started and stopped. a séance table and a doily and a candle and they interact with all those things with their hands while they’re in the experience. People do get a lot of fun out of that approach.

Will this be the last segment of the Eye for an Eye universe?

I hope not! Even Marcus still has untold parts. We actually incorporated a gaze trigger in the experience where, if you look at the picture across the room, you’ll be sucked into the bathroom where a scene from Henrietta played out. But, there’s no way to really show that aspect of the piece yet. We’re doing this weird dance between art and tech until the industry standardizes all of this amazing, quirky, novel offshoots.

Can you talk about the production process for the scene in which the candles are lighting and relighting and moving? 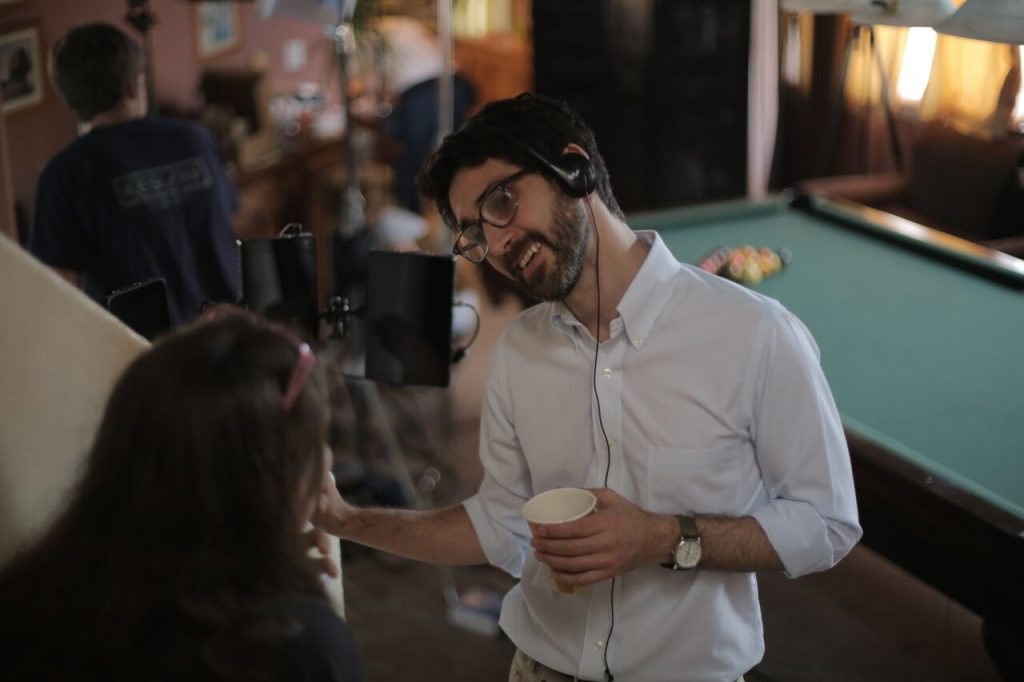 For Eye for an Eye, Petridis used an array of four GoPros.

So that was a real “ask” to problem solve.I cannot jump in for an insertClose-up shot of an object or detail previously seen in a wider angle., and I can’t cover the moment. So the candles going out have to happen in the master and then the master has to continue. We did it like musical chairs. My AD would call “Freeze” and the actors would literally freeze!  She’d run in, blow out the candle, and then I would call action and we’d keep shooting the master. I’m a fan of in-camera techniques, so that’s how my mind approached solving that. This was especially important to me here as I felt like the more post gimmicks there were the less of a “reality” it would really be where you could be actually scared. It had to feel as real as possible.

What were some of the most significant challenges you faced when filming this piece? 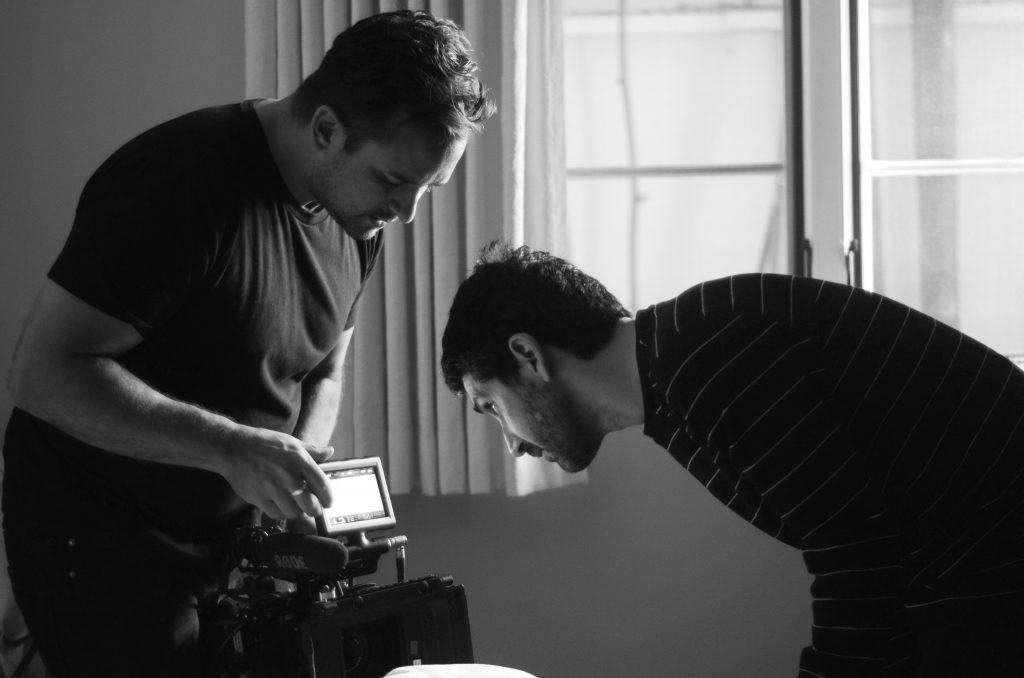 Looking back, what would you have done differently?

I would’ve liked to investigate further where and how lighting really plays in cinematic VR. For me, the next hurdle is to start giving the DP more weight. A lot of challenges come with that regarding lighting a spherical space or where to hide the lights depending on the spherical scope of the master shotA shot, typically wide, that captures all the action across the duration of a scene.. But I feel that the DP and the editor are both going to come alive together in VR, each discovering what the other can and cannot do.

Tell me about some of your other immersive experiences you’ve done.

Eye For An Eye was my first. I’m the CEO and Creative Director at Fever Content, a VR creative agency.  We’re focused on state-of-the-art music experiences as well as narrative pieces. What we approach now is so much more complex than Eye For An Eye, meaning, the medium has come so far in such a short period of time. When I look back on Eye For An Eye it already feels nostalgic to me, and I love that about it. I hope people can relate.

What are you working on next? 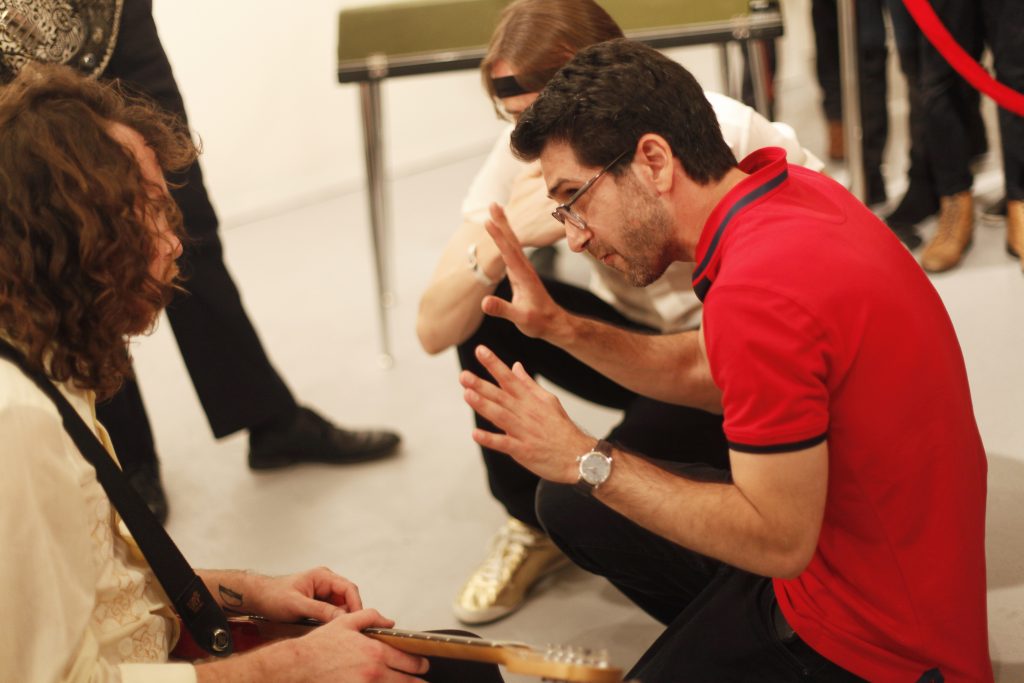 Fever Content has been approached for some pretty stellar projects, but I can’t say much else unfortunately. We’re involved in granting wish fulfillment for fans with major artists in a very big way that people are going to embrace on a large scale.

What is your favorite VR piece you’ve seen?

Tomorrow by Future Lighthouse. Eden by Craig Bernard, his team and SAMO.

Beyond the aspect of immersion, horror in VR can be even scarier because you cannot see the real world around you. Can you talk about VR’s performance as a medium for horror?

What interests me is which segments of the 360 am I going to let you see and when and why. Just as I can show you everything in 360, I can also withhold segments until I want them to come alive. This approach coupled with positional audio can lead to some very frightful things. I think that’s how Hitchcock would have done it. He would have figured out the difference between surprise and suspense in virtual reality.

Anything else you think I should know about this piece that I haven’t asked already?

Eye For An Eye is part of a transmedia universe. It has a prequel in short film form. Ghosts aside from Marcus all have backstories. The fun is continued in our social media communities so I would encourage people to tune in to know more; www.eyeforaneyevr.com is also a good place to check out. I’d like to keep telling stories in this universe for a little while longer, and I have a few cracking tales to try out.