The Moza Guru 360º Camera Stabilizer is a 3-axis gimbal made for virtual reality cameras.

What makes it a 360º gimbal? The motors for the Moza Guru are located below the base plateA part of a composite, usually intended as a background, though here it refers to a duplicate version of the main shot w... More, which gives the camera an unobstructed view. The gimbal counteracts unwanted shaky motion to maintain a level horizon. This provides stable video during production, which helps circumvent the hassle of stabilization in post-production editing.

One of the obvious factors that comes about from using a 360º stabilizer like the Moza Guru is that you will be in the shot if you are holding the gimbal. This could be useful in situations like a 360º vlog or a creative stand-up for a 360º journalism story.

However, it is often that you don’t want to be in the shot. One of the great features about the Moza Guru and other stabilizers like it is that there is a quarter-inch mount on the bottom. This means you can attach it to a light stand or tripod. This is great for situations in which you need a stable shot on a windy day or if you are on a rocky boat but don’t want to be in the shot. You could also attach it to a car clamp and finally get that stable car shot without giving your viewers motion sickness.

What are the unique features of the Moza Guru? 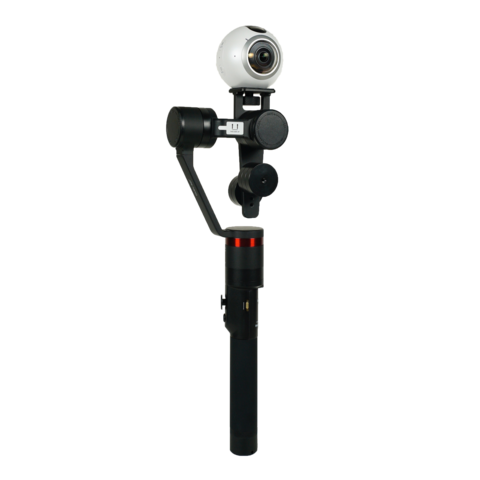 The Guru 360 camera stabilizer offers a narrower form factor than existing gimbals to minimize how much of the gimbal your audience sees in any 360 shot.

The Moza Guru has a five-way joystick that allows you to control the gimbal movements up/down/left/right. This joystick can be pressed inwards to change the stabilization modes.

The Moza Guru can also be held in an inverted orientation, which allows you to get low-angle shots.

The Moza Guru has an interchangeable head; the handle can be detached from the gimbal head by twisting the handle until it unscrews. This means the gimbal system can be swapped out for other gimbal heads by Moza like the Mini-C and Mini-G.

The handle has a quarter-inch mount on the bottom and the side allowing you to mount it on anything like a light stand, tripod or clamp.

What cameras does the Moza Guru 360 support?

The Moza Guru can handle any small compact camera (250 grams max) including but not limited to the following:

The gimbal could even support smartphones as long as you have the right counterweight setupA camera position for a given scene. You might shoot more than one shot from a single set-up (wide shot and close-up). (and enough counterweights), as well as a smartphone clamp with a 1/4-inch mount.

What’s in the box?

How do I set up the Moza Guru?

Step 2: Mount your camera to the base plateA part of a composite, usually intended as a background, though here it refers to a duplicate version of the main shot w... More.

Step 3: Add counterweights to balance the gimbal so the camera stays upright.

Step 4: Turn on the gimbal by holding down the On/Off Button

Sometimes when you turn on the gimbal it will stutter, freak out, then shut down. If this happens to you, make sure the head is turned in the correct orientation. If you need to troubleshoot this issue, watch this video:

The purpose of a gimbal is to keep the camera balanced and counteract unwanted motion. This is made possible by three motors that are constantly turning to keep the camera steady. If these motors are overworked, then the gimbal may not provide optimal stabilization. To prevent this, it is best practice to balance the camera using counterweights to relieve tension on the motors.

The manual offers diagrams on how to counterweight for the KeyMission 360, Theta, Pixpro SP360 and Gear 360.

One problem I did have with the stabilizer is that the counterweights would occasionally bump into the neck of the handle when I had the Pixpro loaded. But this is only when I was making large twists and turns. So, something to note is that there is not a huge range of motion with this stabilizer. I wouldn’t use the stabilizer if I were skiing down a mountain or doing a high-action sport where the handle would be turning and twisting a lot. I would use it to counteract motion in a car or on a boat. I would also use it on a tripod on a windy day or if I were taking a casual stroll down the road.

Final thoughts on the Moza Guru 360

Overall, the Moza Guru 360º Camera Stabilizer is a great option for getting steady shots without the added hassle of post-production stabilization.

Its small size makes for easy portability. It’s also versatile, supporting a large number of cameras and even your smartphone. It’s quick to set up with the threaded counterweights that avoids the need for extra tools. It’s not something I would use for shoots involving extreme motion, but I would definitely pull it out for shoots involving light action, like walking or a car ride. 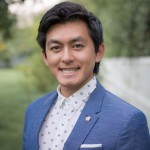 Cameron Quon is a video producer and journalist based out of Los Angeles. He graduated from the Annenberg School of Journalism at the University of Southern California where he worked on immersive content with JOVRNALISM™.

See all posts by Cameron