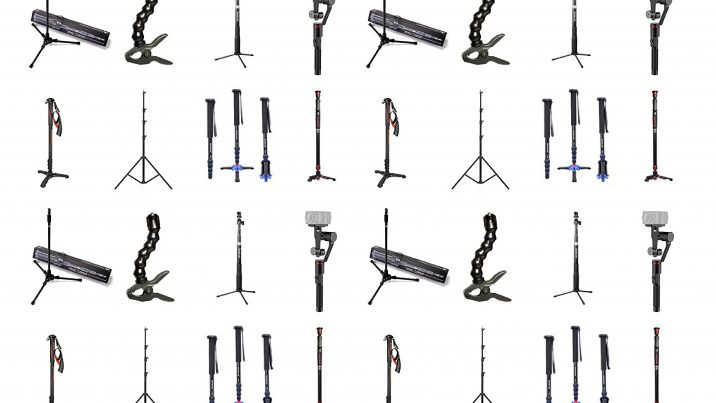 We asked a handful of professional 360 videographers for the best monopods, tripods and more to stabilize 360 shots. Here are their recommendations.

Keeping your camera stable in 360 is even more important than keeping fixed frame shots stable—if you skip this step, you’re risking making your viewers feel sick!

In addition to wanting stable solutions that are fast to assemble and flexible for multiple situations, 360 stabilization solutions have their own requirements.

Of course, no tripod should be easily tipped over. But, in most cases, the videographer is nearby—just in case. In 360, you’re too far from the camera to save it in case of a stiff breeze or a stray dog.

You’ll also have to think about how the tripod or gimbal might affect your shot—and what level of effort it might takeIndividual instance of a shot; a take = each time the camera is started and stopped. to mask it out.

Sure, a lot of new cameras are boasting internal stabilization features for shooting on the run (including the Insta360 Air, Nano and Pro, the Xiaomi Mijia Mi Sphere, and Garmin’s Virb 360), but external stabilization solutions will always matter. Especially for 360 professionals.

So, we asked a handful of 360 pros for their favorite stabilization solutions. Here’s what they had to say:

“We abandoned using tripods a long time ago. Instead, we use light stands,” said Robert Hernandez (our editor-at-large and professor teaching 360 production at USC). Unlike tripods, light stands offer narrow feet and a lot of height while remaining relatively stable (though, never underestimate the value of a sandbag), he adds.

“Because of wind and rough terrain challenges at times, I recently bought two Triad stands,” Hernandez said. “They are solid and heavy.”

“I love Cheetah Light Stand C8 because it’s light, can be as high as 3 meters, and can fold automagically,” Rojas said.

Supports rigs up to 7.5 pounds

Here’s an example of the Cheetah Light Stand in action, from Dan Rojas and the New York Times.

Monopods are probably one of the most used 360 stabilization solution. Many of them offer a ton of flexibility to use them in lots of situations—in addition to being extremely narrow—but there are also a lot of new solutions coming out that were built with 360 production in mind. Here are three favorites.

“Huge +1 on the Koolehaoda monopod,” Garnier said. “The chunky disc at the top is removable. I replaced it with a simple, inexpensive ball head that can lock into a full 90-degree swivel.”

Supports rigs up to 15.3 pounds

Garnier adds that the short feet on the monopod benefit from sandbags for extra stability and security. He recommends Neewer Photographic Sandbags.

We tested out this monopod at NAB and really enjoyed using it. It has a lot of great features, including a quick release to switch mounting heads (It’s compatible with iFootage’s Komodo tripod heads to switch from fixed frame to 360 easily) and the monopod extends easily to 150 cm with a twist of the lock grip and pull.

You can read a full review of the iFootage Cobra 2 Strike Monopod here.

“[This monopod] is strong, light and stable,” Jebb said. “It has all the adjustability you need.” Though he does recommend removing is the wrist strap before using it for 360. “That is designed to make the monopod useful as a walking stick, but it interrupts the view somehow unless you fully remove it.”

Supports rigs up to 13.2 pounds

Never underestimate the value of a selfie stick, flexi arm or a gimbal. Selfie sticks are extremely light and can be used to hold a camera overhead, turn a tabletop tripod into something more, or offer some extra height for minimizing parallaxThe optical effect where an object’s position appears to differ when viewed from different positions, i.e. the left ey... More issues and the width of the base.

Flexi arms let you clamp your camera to just about anything.

And gimbals make it possible to walk and talk with your camera, adjust to the wind, and takeIndividual instance of a shot; a take = each time the camera is started and stopped. your camera on a number of bumpy adventures. Here are three of our favorites.

“The ActionPod has been an amazing accessory in so many situations. I’ve used it as my handheld selfie-stick during Facebook Live 360 coverageMultiple shots from multiple angles to capture the events in a scene (i.e. master shot, medium shots, close-ups, inserts... More that I can easily clamp on things mid-stream and go hands-free. I have also clamped it to light stands to hold my H2 Zoom.”—Robert Hernandez

“The Manfrotto (or similar) Flexi Arm can be used with a vice clamp and is the most flexible—and discrete—option I’ve found.”

(Note: I’ve seen Robert in action with his and I immediately bought my own. He ran around clipping it onto just about anything to get kickass shots quickly, and clipped it to tabletops while live streaming to give his arm a break. So useful!)

An extendible selfie stick can be great for shooting on the run. Not only is it easy to carry with you at all times, but it’s also useful to get a quick shot by extending it above your head. With a consumer 360 cam you can set up, capture your shot, and pack up within a few minutes.

Alburquerque recommends an extendible selfie stick with a screw mount at the base so you can attach it to any tripod stand—he has the Smapole Q3 Selfie stick. “It’s bag friendly and swift to use,” he said. It’s only 200 grams and 25 centimeters long, but can extend to 100 cm.

In addition to being fast, a selfie stick can also make maskingBlocking a portion of the image. out your tripod a bit easier.

“If you elevate the camera further from the base with extenders—there are a variety of ways, including selfie sticks—it reduces the parallaxThe optical effect where an object’s position appears to differ when viewed from different positions, i.e. the left ey... More and removes the base.”—Robert Hernandez

(Note: I almost always have a selfie stick and Manfrotto’s Pixi tabletop tripod in my bag to shoot just about anything on the go. The two together make an extremely light, portable, flexible stabilization solution.)

The Moza Guru 360 is a three-axis stabilized gimbal that works with most 360 cameras up to half of a pound (however, it can support heavier cameras, like the Vuze, depending on the camera’s center of gravity). It has three modes, lock, follow, and head lock.

It’s made for 360 cameras, as the design organizes the counterweights, motors and arms on one plane, so it’s feasible to align them into the stitch line so the gimbal is nearly invisible to your camera.

You can read a full review of the Moza Guru 360 here. It’s also worth mentioning that they have a version for larger 360 cameras, the Moza Guru Air, and the Moza Wearable Kit to make it significantly easier to stabilize POV and drone shots. Both products would make the cut on this list, but the Air is only available for pre-order at this time and the wearable kit is sold out. But both are still worth knowing about!

Supports rigs up to .55 pounds

Have a tripod, monopod or something else entirely that you consider a can’t-miss bit of kit? Share your recommendations in the comments!