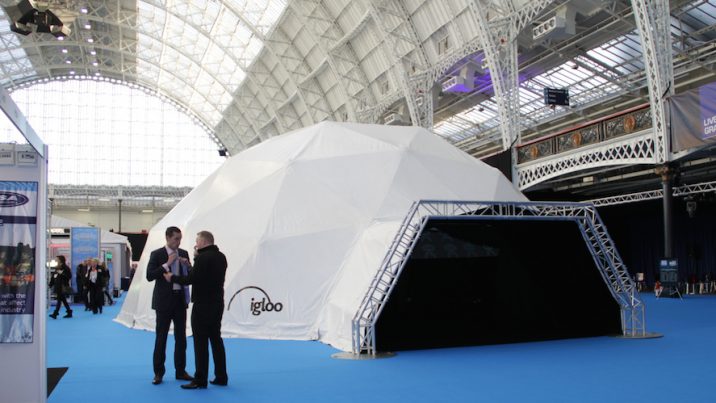 Igloo Vision, known for its shared VR projection domes and cylinders, has a new use case: collective 360 editing.

Most often used for shared VR/360 experiences at events, conferences, documentary festivals and the like, the company’s domes and cylinders and hold around a dozen people for a shared 8K (by 1K) 360 video experience.

Its latest feature, annoucned at IBC, is the ability to stream content to the dome directly from an editing software, such as Adobe Premiere or After Effects, to allow a group of people to collectively watch and comment about an experience and make changes in real time.

“It’s a new concept we’re pitching here,” said Igloo Vision’s Head of Business Development Jake Rowland. “You can view as a group and make changes in real time, rather than watching in a headset one at a time. So far, the response from the industry has been good.”

Essentially, content from within an editing software playing on a separate computer can be fed into Igloo Vision’s media server via NDI, so anything done within the editing software is replicated on screen in real time.

Already, the UK-based company has been renting and selling its “igloos” for use at trade shows, like VRLA London and VRTO; documentary festivals, including Sheffield Doc Fest; and for training events, particularly in industrial applications.

“A lot of times, you can’t get enough people through a VR experience at a show because it’s one at a time, or sometimes people are concerned by the hygiene aspect of headsets,” Rowland said. “With our products, 10 to 12 people can view the content at one time and communicate about it, so they can share their experience and share their reaction, rather than it being a solitary experience.”

What do you think is the value of live group editing of 360 content? Would you buy an igloo to do so? Share your thoughts in the comments.