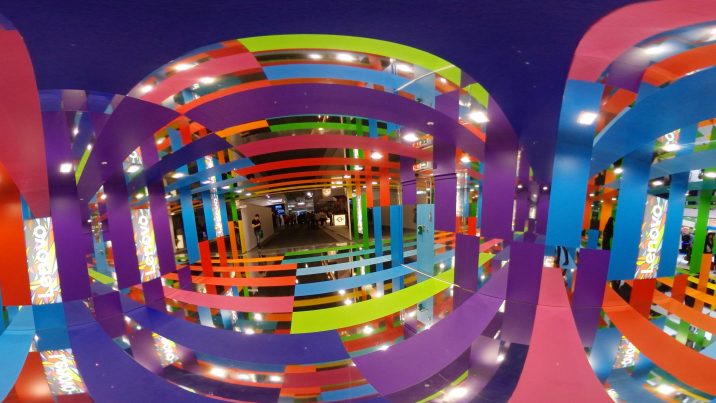 Today is officially the last day of IFA in Berlin. IFA is sort of the CES of Europe and, as such, was surrounded by a number of big announcements. Among the biggest include the launch date (October 17) of a handful of Windows Mixed Reality headsets, the Insta360 ONE and the 4K Ricoh Theta V.

But, there was also a new action camera from Sony that seems to be vying for a piece of the multi-camera VR rig market, new camera news from the previously-bankrupt Panono, and play time with the new Merge Cube AR tool–as well as a handful of other new consumer-grade cameras.

With the more broadcasting-centric IBC coming up in mid-September, I’m sure there are more professional-level cameras and kit just around the corner, but these are the biggest announcements from Europe’s largest consumer electronics show. 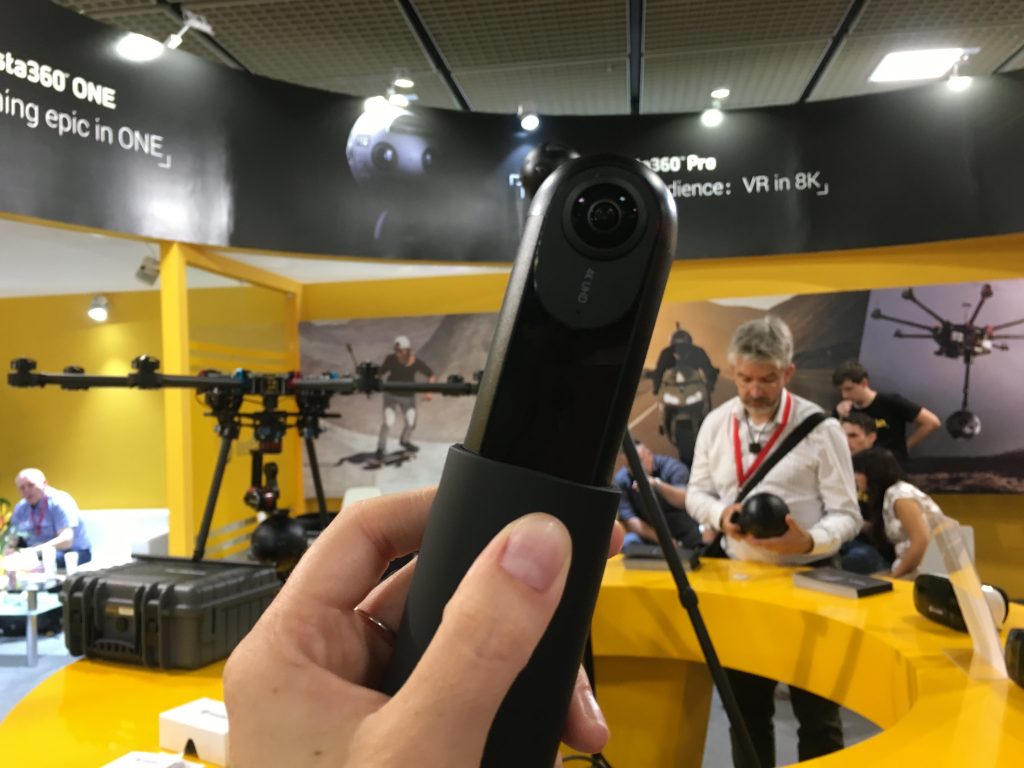 The Insta360 ONE can capture 4K 360 video as well as 1080p fixed frame video and bullet-time videos.

The Insta360 ONE will be able to capture 4K 360 video at 30 fps, but also has an interesting feature that allows users to capture a scene in 4K 360 video and crop out flat 1080p fixed frame video after the fact using the ONE’s companion app. The app has a SmartTrack feature so users can automatically select “a 1080p fixed-frame video where the subject of their choice is always centered” using the app after the fact.

The Insta360 ONE also features interal six-axis stabilization with an onboard gyroscope both to stabilize videos, but also to allow users to keep the monopod or selfie stick directly beneath the camera (so it hides in the stitch line) without affecting the nadirThe bottom of the sphere. of the final shot.

In addition to 4K 360 video at 30 fps and 24 MP photos, the camera can also capture timelapse 360 videos and higher frame rates up to 120 fps at lower resolutions. It can capture 2560 x 1280 at 60 fps and 2048 x 512 at 120 fps. It will also be able to live stream when it ships in September. Its high speed capture feature enables a pretty cool party trick for the camera that makes 360 a bit more shareable on social platforms: bullet time mode.

The camera also features a high dynamic rangeThe varying degrees of brightness that can be captured by a camera or displayed by a playback device. You can think of i... More shooting mode, supports taking photos in RAW format and videos in Log format, and offers manual control of exposureThe measurement of the brightness and range (latitude) of light being captured by the camera. Exposure is governed by ca... More value, ISO, shutter speed, white balance and more.

It can be used as a standalone camera, controlled remotely with a smartphone via Bluetooth, or directly connected to the smartphone’s charging port.

We shared a full rundown of the camera’s specs and a review when it was announced August 28.

Another announcement–which could arguably be our #1–is the launch date of many of Windows Mixed Reality headsets. Versions from Acer ($299), HP ($450 with controllers), Dell and Lenovo (both $349) will be launching October 17 of this year. Asus’ version (which looks super sleek, btw) won’t be launching until Spring of 2018.

Despite varying design features, the headsets’ internal specs are quite similar:

All of the Windows Mixed Reality headsets will require a PC running Windows 10 (with compatible PCs starting for as little as $499).

More than 60 apps will be available to Windows MR headsets when they launch in October, including Jaunt, Littlstar and (later) SteamVR. VRFocus put together a full list of available apps here. 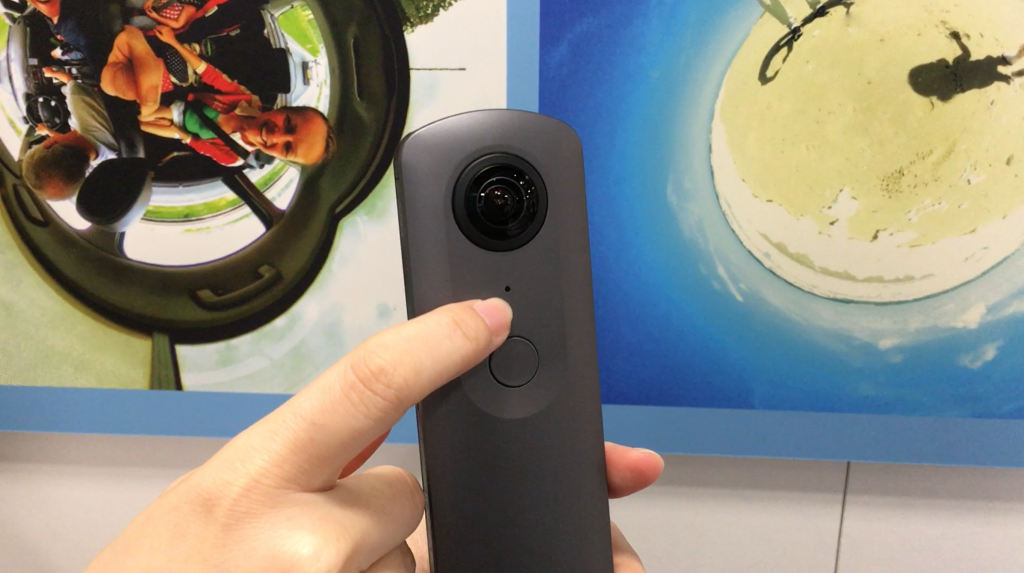 The Theta V looks very similar to previous Theta models, and its twin fisheyeAn extreme wide-angle lens, with image distortion occurring at the edges of the frame. f2.0 lenses are the same. But, the Theta V boasts new 1/2.3-inch 12-megapixel sensors to produce less image noiseUndesirable variations of brightness and/or color in an image that typically occur when recording at high ISOs in digita... More, capture better low-light shots, and result in fewer blown-out highlights.

We shared a bunch of samples from the Theta V when it was announced last week.

The Theta V also feature four microphones to capture spatial audio. With two on the side of the camera and two on the top, the camera will be able to record spatial audio based on direction and height. Ricoh is also already selling a $269.99 360-degree microphoneThis is a description of a microphone it goes here and it's long so that we see if it gets cut off. that can plug into the bottom of the Theta V.

Ricoh will also be selling a waterproof case for the camera for $199.95, starting in October. The TW-1 case allows you to control the camera even while the case is on, and minimizes distortion and chromatic aberrations underwater. It can withstand depths up to 30 meters.

Another feature unique to the Theta V from previous Theta models is a handful of software plug-ins for the camera that Ricoh said will add new functions to the Theta V over time. The first plug-in offers wireless playback to broadcast content onto TV or other monitors while using the Theta as remote control (by holding the shutter button and moving the camera around).

Here’s a full rundown of the camera’s specs and features.

4. Sony’s RX0 action camera has cool multi-cam features, with more on the way

Sony claims its new RX0 action camera can achieve a similar level of quality to its existing RX line of cameras. It features a 1.0-inch 15.6MP stacked image sensor and has a fixed Zeiss 24mm F4 wide-angle lens.

But, the most interesting news for the VR and 360 market is that Sony has made it known that it sees this camera as a competitor for multi-camera rigs.

Not only can users already pair and control five RX0s from Sony’s Play Memories app, but Sony also announced it was working on a control box to preview, control and sync more RX0 cameras. They haven’t yet announced how many cameras you’ll be able to connect, but said more news will be on its way before CES 2018.

Sony also showed off a 360 camera rig for multiple RX0s, but wouldn’t elaborate on any further details–like whether or not it just holds the cameras or if it will have additional functionality like GoPro’s Omni rig–stating it’s just a concept at this time to show users what’s possible with the RX0. 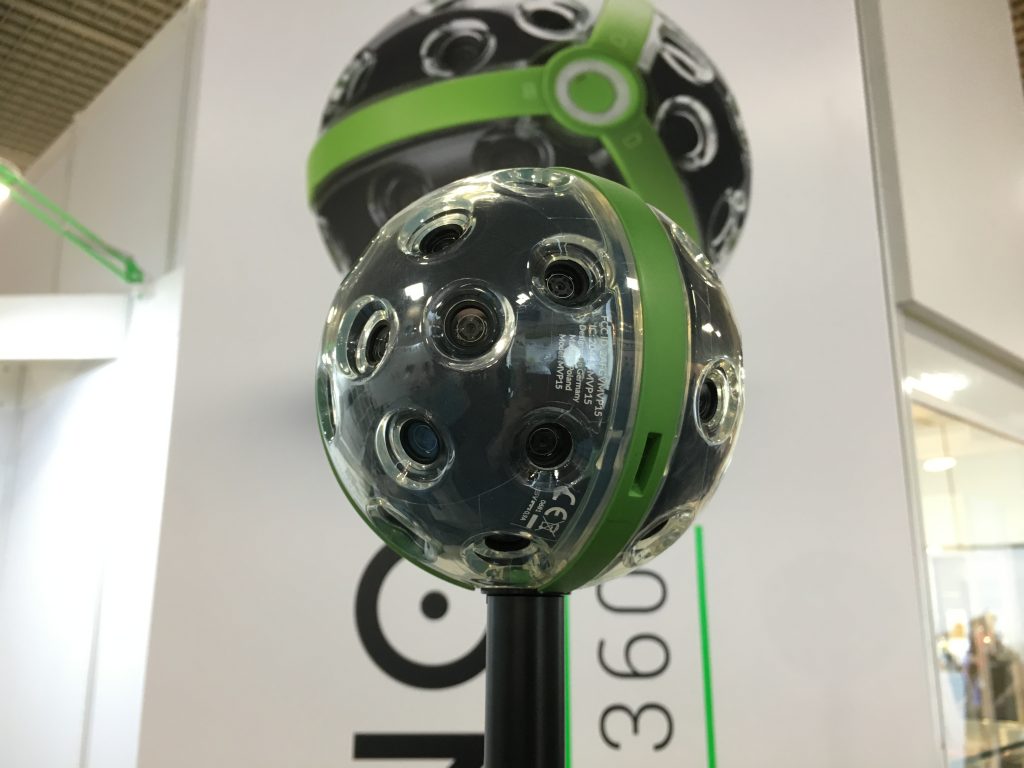 After emerging from bankruptcy in July, Panono is now planning to release an even higher resolutionThe number of pixels in an image, typically presented as a ratio of the total pixels on x axis to the total pixels on th... More still 360 camera: 180MP rather than 108MP.

In May, Panono declared bankruptcy. In July, the makers of the 108MP 360 still camera by the same name were bought by another company.

Not only is Panono back in business with cameras for sale and its cloud stitching and hosting solution living on, they’re also planning on launching a new and improved 360 still camera. The new camera would be able to capture 180MP photos, rather than Panono’s already-high 108MP.

Although Panono representatives said they had originally planned to launch the camera before the end of the year, its been delayed and Panono doesn’t have a new release timeline for the 180MP version yet.

Regardless, it’s great to see them rise from the ashes with big plans for the future.

Although DJI’s focus at IFA was on its new Phantom 4 Obsidian and Mavic Pro Platinum drones, the company did announce a new feature for its Spark mini drones.

DJI hasn’t said if they will be adding the feature to its other drones. 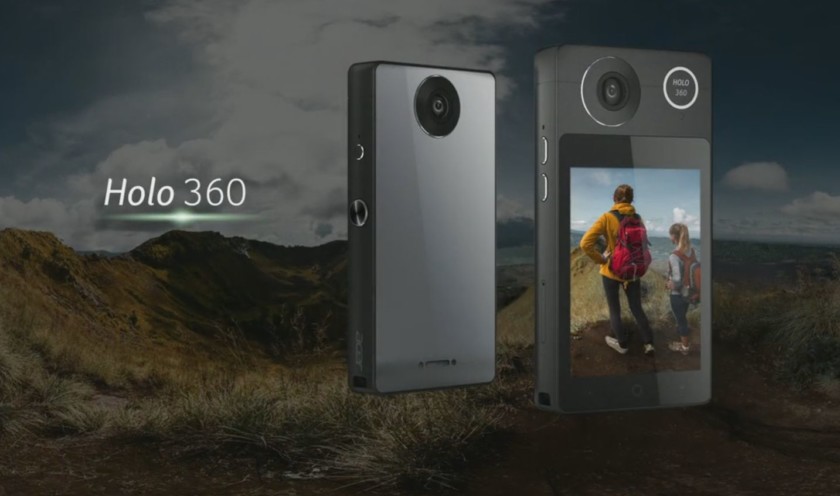 Acer had two new 360 cameras to show off at IFA: the Holo360 and Vision360. Both of the cameras are LTE-connected devices.

The Holo360 is an all-in-one device to shoot, edit and share (via LTE) 4K video and 6.9K photos. Its stitching is powered by a Qualcomm Snapgdragon 625 processor and it has a 3-inch touchscreen to edit creations without a phone or computer.

The device also allows users to livestreamDistribute video playback in real-time. and upload finished products directly from the device.

The Holo360 will be available in NorthThe point of origin where a viewer enters a 360° scene, also serves as a frame of reference for orienting discussions a... More America for $429 in Q4 this year, along with a water-resistant case. Prices and release dates for the Vision360, which is geared for use as a dash cam, have yet to be announced.

8. The Merge Cube is pretty fun, and it’s only the beginning.

Merge has other AR triggers on the way…the Merge Cube is only the beginning! More to share at CES in January! pic.twitter.com/oD01Jikn8L

At the beginning of August, heaset maker MergeVR announced the Merge Cube, “a hologram you can hold in your hand.” But, that’s only the beginning. The company has other triggers on the way for 2018.

One of the chief issues with AR apps is the specificity of triggers for each experience. Merge has already built 12 apps for its Merge Cube and said more than 500 developers were working on additional apps for the device.

Merge’s existing headsets are already compatible with the Merge Cube apps–simply pop out a piece of the front of the foam headset and align your smartphone’s camera through that slot. Then, open one of Merge Cube’s compatible apps and choose a game to play or learning experience.

In the video above, I chose to play Starship and move the cube up, down and around to avoid running into various obstructions. Although I didn’t fare so well–through no fault of the Merge Cube platform!–it’s definitely a fun start to a bright future for AR in general.

MergeVR itself said it had big plans for additional AR triggers that it would be announcing at CES in January. 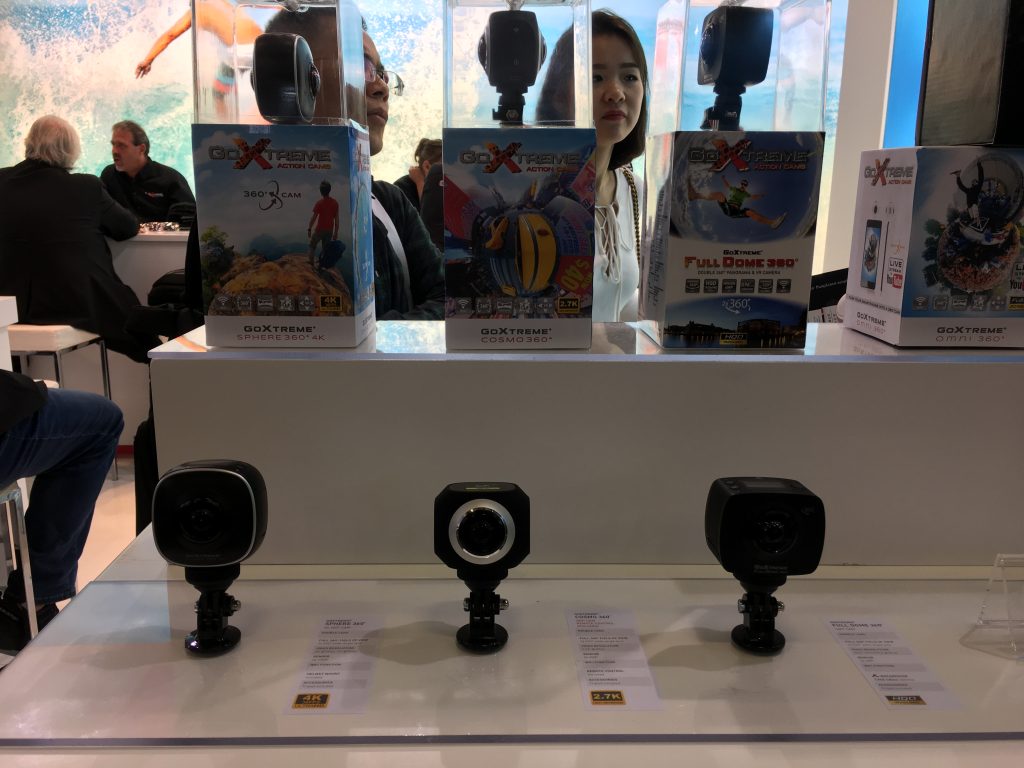 GoXtreme’s Sphere 360 4K camera captures 4K video at 30fps and features a one-inch OLED status screen to monitor the camera, as well as WiFi functionality to connect to smartphones.

It comes with both a tripod and helmet mount, with optional remote control and waterproof case to depths of 30 meters. The price for the Sphere 360 4K camera has yet to be announced.

This is GoXtreme’s fifth 360 camera. 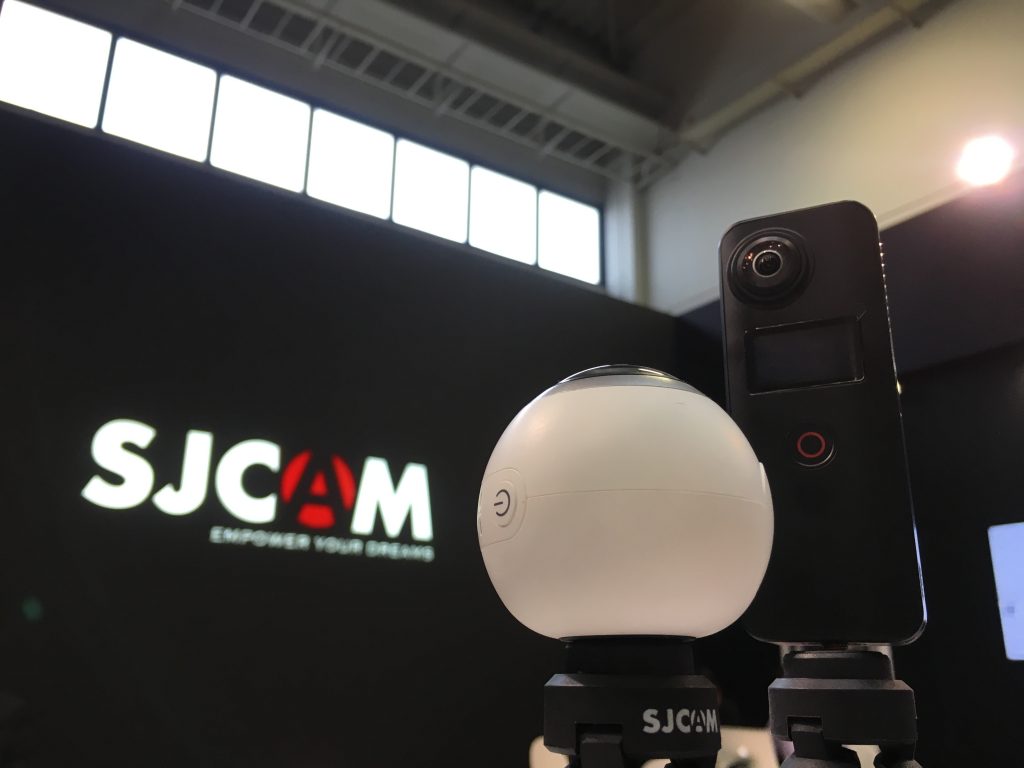 SJCam’s new SJ360+ camera improves upon its previous camera, the SJ360, by adding a second lens to capture full 360-degree video, rather than 220 degrees.

The camera can capture 1080p 360 video at 30fps and 5MP photos. It also has a new app, SJCam Pano app, to stitch footage immediately and share to social platforms. The app is avaiable for both Android and iOS devices.

Its 1650mAh battery can last for up to 2 hours and it can has a slot for a removeable microSD card (up to 64GB).

The camera is available now for $99.