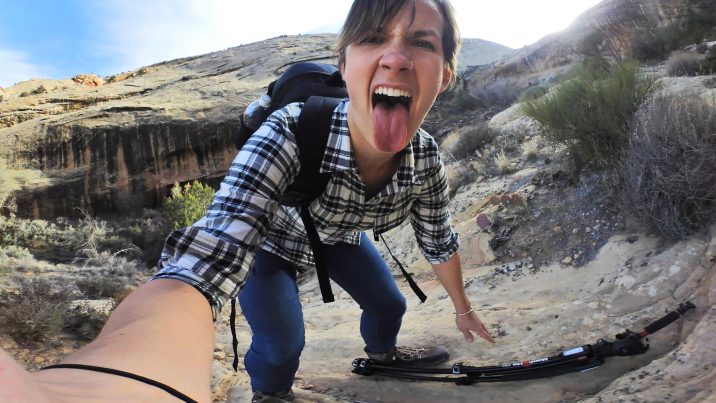 McClatchy video journalist Brittany Peterson talks about how the McClatchy DC video team produced a quick-turn 360 video in less than a day.

Very few newsrooms think of 360 as a medium that lends itself to quick-turn stories. There are syncing and stitching issues, massive files to transfer and render, and special plugins for graphics to name a few hurdles.

But last week, when a gunman opened fire on members on Congress practicing for a charity baseball game, McClatchy decided to test their limits and see if it would be possible to cover the news with a 360 video.

Immersive Shooter sat down with Brittany to talk about what worked (and what didn’t work) for covering breaking news in 360, and the best quick-turn 360 workflow.

This piece was unique for your team as your first breaking news 360 piece. Can you talk about the production process and how you were able to make it happen?

We’re used to a 360 video being a one-person production, but for this one we had a lot more hands involved. It was really clear that we could turn it quicker and it would be better if we had one person in charge of the idea, one for production, one for editing, etc.

So, I was in a cab heading to the office when the news broke. We only had a few people credentialed for the Capitol, so I went there for reactions. Ben Connors suggested we shoot 360 video at the scene. Ali Rizvi lived nearby, so he started filing cell phone video, and then one of the editors, JulieAnn McKellogg, brought him a Nikon KeyMission for 360 video and a tripod. Jessica Koscielniak pulled audio from lawmakers to layer under video, and transcribed it. I cut the shots together, added the audio and graphics, and Natalie Fertig captioned it in Facebook. It took six people all in all, even though it was a very simple piece.

I got all the footage by around 3, but I already had the audio laid out, graphics made, everything. Then I just threw in the video. It was live on Facebook by 5:30 p.m.

What piece took the longest to get together?

Honestly, we did it as fast as it could have been done. Out of everything, the cab ride for the videographer was probably the thing that slowed it down the most!

What advice do you have for newsrooms wanting to produce quick-turn 360 video, like this one? 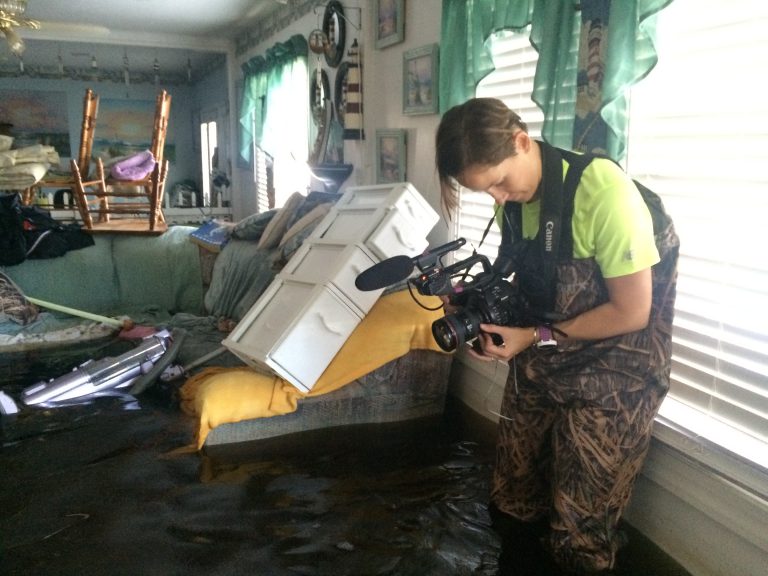 The first bit of advice would be to have the camera with you. We don’t normally cover the local market here, so we usually keep our cameras in the newsroom, so an editor had to drive one out to my colleague at the scene.

I’d also say to make sure all of your programs and plugins are up to date. Mine were being finicky, so the text on screen looks a bit warped and it wouldn’t have done that if I’d addressed those issues beforehand.

The third thing is having multiple people in the newsroom well versed in the medium, so they can edit, or know what audio will be needed, or feed info for graphics. Having a 360-literate newsroom was the reason we were able to pull this off as a quick-turn. Every time I made a suggestion, someone had already gotten that part of it done. That’s the benefit of working with a team that knows what it’s doing. That was especially impressive to me, because we don’t normally do breaking news and we don’t have a clear workflow for it.

Also, it’s important to realize what’s going to takeIndividual instance of a shot; a take = each time the camera is started and stopped. the most time. For example, you can turn something around faster if there’s no central voice or character, if it’s just a scene from a larger event. You can produce about a minute in half of a day.

If you had had more time, what would you have done differently for the piece?

I would have loved to talk to a witness, get the police report, talk to families that were impacted.

If we could have talked to a witness, I would have liked to have them stand where they were when it happened and walk the audience through it. That would have been really powerful. We tossed it around, but opted for a quicker turnaround instead. That actually would have been a good follow-up for the next day.

Surprisingly, I think covering breaking news and crime is a good use for 360, even though I haven’t seen much of that yet. Local newsrooms’ viewers already  love watching videos about crime; I could see it being a powerful medium for that.

How did the video perform, and were you happy with how it was received?

It got solid traction, considering our often small, local news markets. A good number of 360 pieces for one specific newsroom would get 6000 to 8000 views and this one got around 40,000.

I know you produced this piece in particular with the Nikon Keymission. Is that your team’s go to camera? 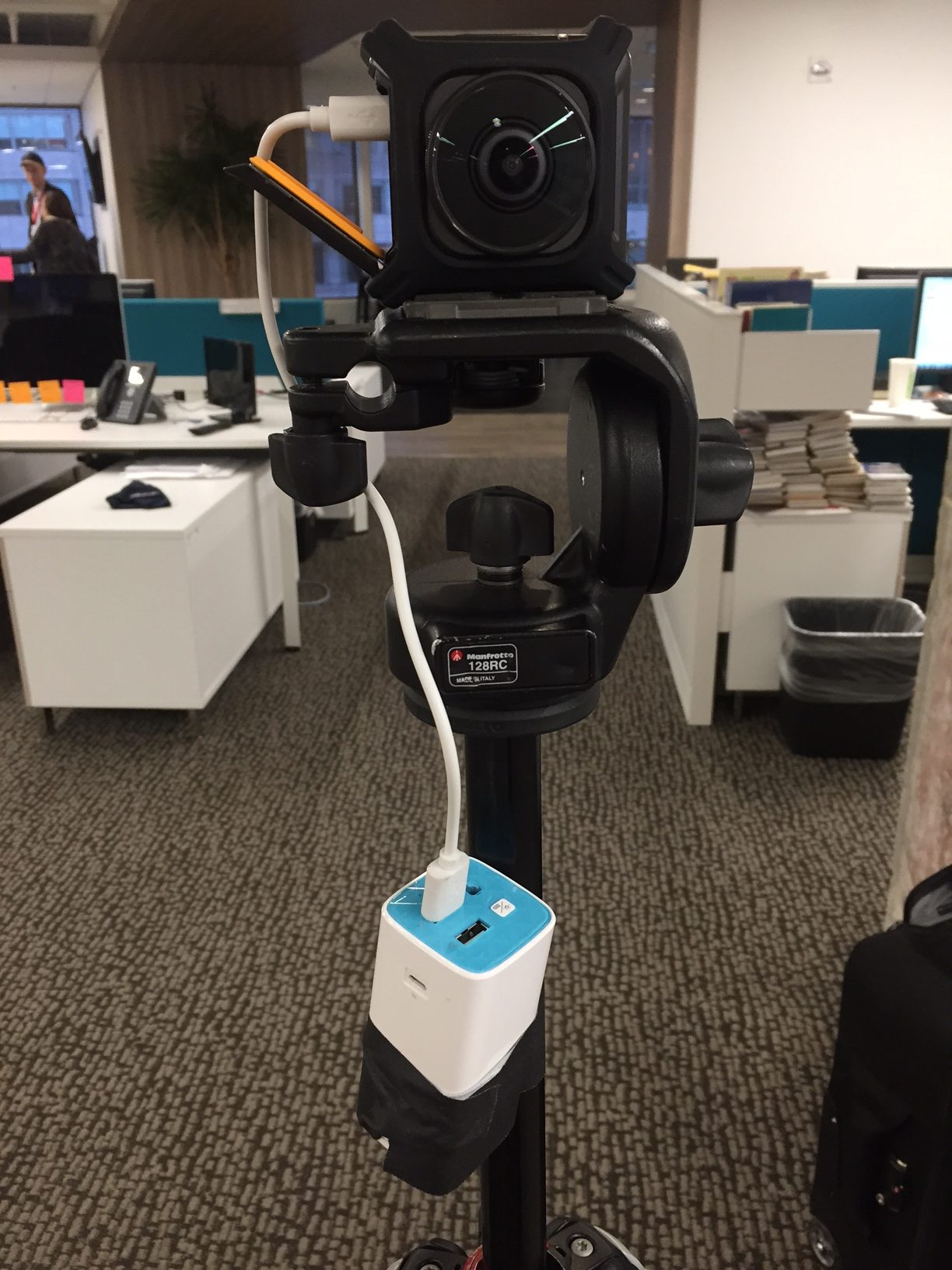 This is the setupA camera position for a given scene. You might shoot more than one shot from a single set-up (wide shot and close-up). Brittany used to capture a timelapse with her Keymission rig.

Most of what we do is from the Keymission, and it’s been great for building stories for a mobile audience. You do have to be about 6 feet away from the seam to get a clean stitch, but it works for mobile. And, I have an iPhone, so it was one of the only cameras that worked for me.

But I just got the new Samsung Gear 360 and I’ve been using it for biking adventures and things, and I love the quality and that you can get a clean stitch even one or two feet away. I’d also be curious to see our local newsrooms with it, so they could experiment with live 360 since they already love Facebook Live!

In this piece, you used voice of God narration on top of videos from the scene, but I’ve also seen 2D fixed-frame overlays on top of 360 video, voiceovers, etc. How do you decide how to approach audio?

One simple rule I follow as a Spanish speaker covering some stories on immigration and Cuba, if it’s in another language, do a voiceover. When we produced the piece on wet-foot, dry-foot, we tested voiceover versus text on screen and everyone preferred the narration. So, if something will require complicated explaining, we will do narration instead.

Ideally, we’d have their interview audio and some 360 b-roll of that person in the scene, but that isn’t always possible. Whenever we do narration, we want people to see the person speaking even if we don’t have 360 video of them, so we’ll bring in photos or graphics. Other times, I’ve tried video portraits.

In the Wet Foot, Dry Foot piece, we brought in fixed frame video interviews and blurred out the background 360 video because there was so much going on in the background and we didn’t want to overwhelm the viewer. So that really helped isolate that voice.

2D storytellers are always trying to simplify the story and provide the essentials while still catching the audience’s attention, but in 360, you have to simplify even more without sacrificing those attention-grabbing components. It’s very challenging, but it’s a fantastic challenge to have.

What advice do you have for small newsrooms who might be wanting to get started in 360?

I’d say pick a simple story with minimal text and simple audio. Build it for a mobile audience. Don’t psych yourself out worrying about ambisonicPertaining to audio reproduction that captures the spatial acoustic qualities of recorded sound. audio and other things like that before getting into 360 video. Just give them a couple scenes (7-11 seconds long is my sweet spot) of something interesting to look at and rich audio from the top.

What are you using for post production for your 360 videos?

Right now, I love the simplicity of the Keymission, which is generally high quality enough for us to use the autostitch and just pull it into Premiere for some TLC. We also use Premiere’s VR plugin to add text with minimal warping. With the new Samsung Gear 360, I’m using Action Director a bit more, but we aren’t manually stitching yet

We have a very simple post production process, with easily repeatable steps for all of our newsrooms.

Obviously, this piece was a bit of a special case. But, what’s in your gear bag for a normal 360 shoot? 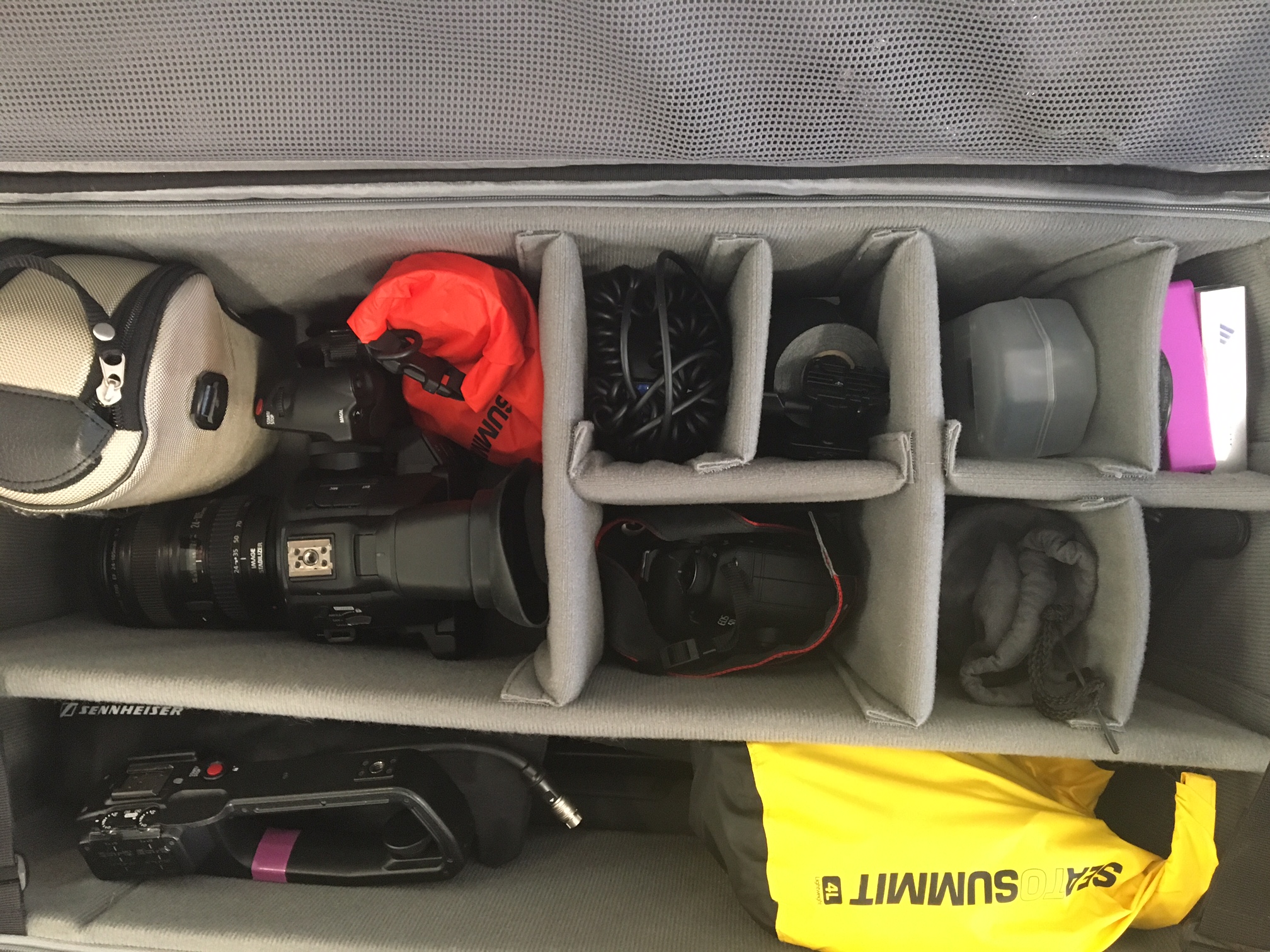 For 360 video production, Brittany likes to keep it simple, using the same tripod she uses for fixed frame video, and a small kit of Keymission accessories. Here’s a glimpse of her gear bag.

I’m simple when it comes to shooting 360 video–perhaps too simple–but I’m also usually shooting 2D video as well. I throw in a small Nikon Keymission toolkit with the camera, an extra battery, a little tripod and a selfie stick. It’s super compact, so I can carry it in my backpack while I film 2D and then swap it out to do 360

I also use the same tripod for both 360 and 2D, and I just remove the handle and extend the top to be a bit longer and bring the legs in a bit to minimize how much of the tripod you’ll see in the shot. But, it’s great because it means I can switch back and forth between 360 and 2D quickly.

We aren’t doing spatial audio yet, but I’m super eager to use the H2N Zoom to try it out and bring my production to the next level.

The only weird thing in my gear bag is massive number of external battery packs because I’m paranoid about needing to charge something and not being able to.

Tell us about McClatchy’s approach to and history with 360 video? 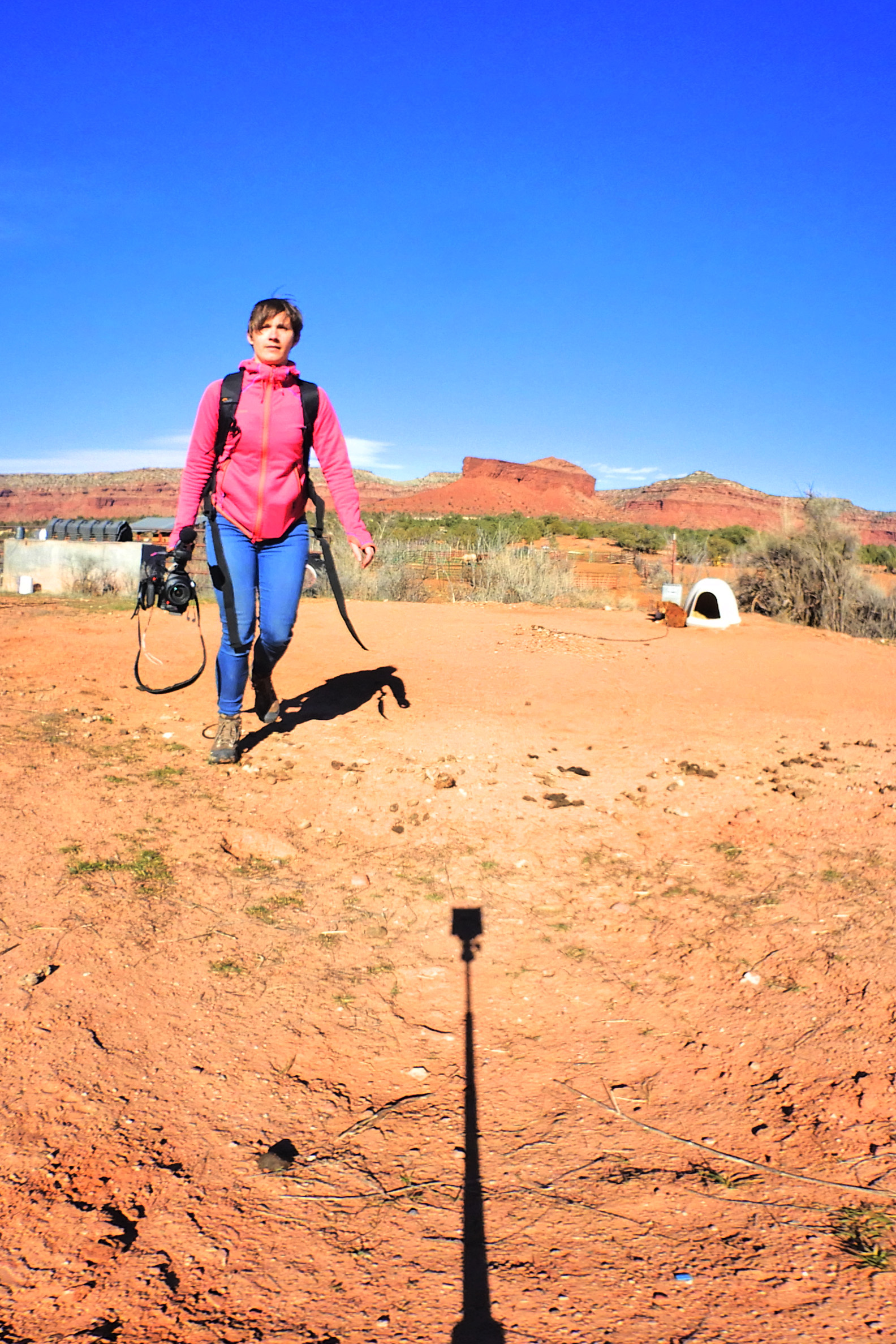 We started with a single scene in 360 and thought it was so cool. Then we did a multi-scene clip and thought, ‘Look how innovative we are!’ Then we added graphics and arrows to ID certain places or people (which I’m now slightly embarrassed about).

Then we started raising the bar to multiple shots with rich audio and character-driven narratives. Now, we’re able to pass on those lessons so we can give a few tips to a strong photographer or videographer, hand them the tools, and sit back and watch what they can do.

My first 360 piece was during Obama’s visit to Cuba last year. We did a tour of Havana in 360 with the Ricoh Theta. Across all of McClatchy’s newsrooms, we’ve produced dozens of videos. I think I see a new one every week. And almost every 2D or interactive piece myself and the other video journalists do has a 360 component that goes along with it. Right now, we’re thinking of 360 as a sidebar–a supplemental piece.

My favorite 360 piece I saw recently was a narrative about a plane stuntman by USA today. The visuals, audio, and narrative were on point. There were some stitching issues, but forgivable considering the story.