In an article in Wired UK earlier this month, VR producer and curator Catherine Allen reminds us that we as creators are living in a little bubble of our own. One where VR is already ubiquitous. 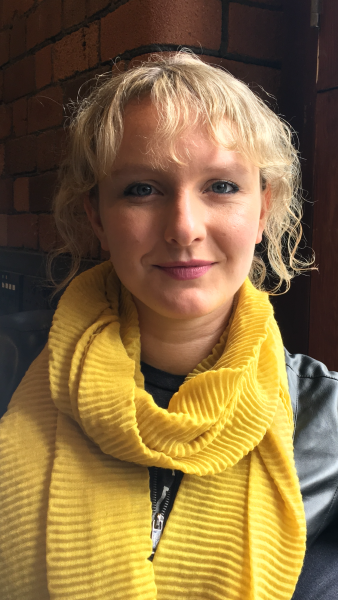 Catherine Allen is a VR producer and curator.

Immersive Shooter sat down with Catherine to talk about this so-called moral panic, what producers can or should be doing to prevent VR from being the next Google Glass, and how (and why) diversity in our emerging industry is so important.

Allen’s VR work includes Easter Rising: Voice of a Rebel (currently nominated for a Broadcast Digital Award) and No Small Talk, two of the first VR pieces for the BBC. She’s also a BAFTA VR Associate, where she sits on an advisory group.

And, she is currently curating a selection of VR pieces for one of the UK’s leading independent cinemas; Watershed in Bristol from June 14 to 17, and leading a VR Diversity Initiative event to be held in the UK later this summer with the support of VR Focus.

Prior to working in the VR space, Catherine worked at Touch Press creating what was then called “immersive apps” and thought her experience with apps and with documentary filmmaking might apply to the newly emerging VR space.

Moral panic and the ethics of VR

Can you explain moral panic and how you think it will takeIndividual instance of a shot; a take = each time the camera is started and stopped. shape against VR?

Moral panic tends to be when the mainstream press responds to something new with an exaggerated sense of urgency. It’s a sociology term first coined by Stanley Cohen in the ‘60s, when he was looking at how the media was reacting to young people from that time in history and blowing it out of proportion. Even those of us who’ve never heard of the term have read stuff and thought, “That isn’t exactly what’s going on.”

Intel VP & researcher Genevieve Bell expanded the theory by identifying three common qualities of a new media form that indicate it is likely to induce a moral panic. If the technology changes our relationship with space, time and other people then moral panic is likely. When I heard that, I thought about how this might apply to VR and what headlines we might see. In the past, some new technologies have stalled because of moral panic—for example, Google Glass.

We as an industry, need to be aware of these concerns so we can address this from the start and build an ethically robust industry from the very beginning. 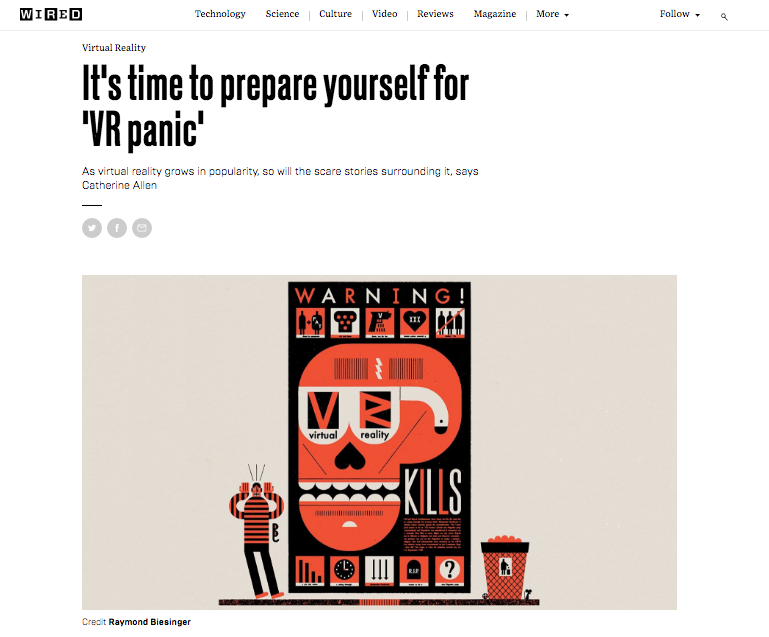 Catherine’s article was published in May 2017 in Wired UK.

What does that look like for content creators? What can they or should they be doing differently to attempt to curb that?

I think a lot of moral panic happens when there’s a divide between the public and the creator. Encourage your audience to provide feedback. If you can, testing early is important. Run the idea past audiences, test their reaction. Or, consider co-creation where you’re making something along with the audience—they’re key stakeholders—like in a focus group or panel. Reduce the distance between you and them. We did that with Easter Rising: Voice of a Rebel. We tested, tested, tested. Getting feedback early is more of a trend in the tech industry, and we should approach it like that rather than as this higher art where we go away and make this and say, “Here, audience, this is for the world!” without an open channel back to us.

Another thing to consider is contextualization. A lot of VR experiences don’t offer space for context, but we need to answer these questions: why am I here, what’s going on, who’s talking to me? It really helps if the audience has a nuanced view of that. Giving context offers your audience a much more grounded experience for your audience. In Easter Rising: Voice of a Rebel, we included a prologue, epilogue and interlude for context.

I should also point out that moral panics often stem from valid concerns. However, moral panic often comes from people who haven’t participated in that experience themselves. For example, a recent study from media and tech law firm, Wiggin, found that people who haven’t done VR are more likely to have concerns about it. We fear the unknown. So, encouraging more mainstream audiences to try it can really help.

How does that change a journalist’s job, in terms of applying ethics to VR experiences?

What’s crucially different about VR is that it’s a medium about simulation rather than representation. We’re more likely to remember VR and 360 video as something we did rather than something we saw. And, because that memory sticks more, it’s harder to wash away an unpleasant experience in VR. And, you feel more complicit in what happened—like pulling a trigger in VR versus watching someone do it in a film. That’s one thing you have to be sensitive about, that you are going to create something that can impact audiences’ own sense of being.

I think trained journalists know what they’re doing and will approach VR with integrity—so the only thing that’s different is a mind shift towards a different question: If I was doing this in real life—if I was bringing my niece with me to Sudan, for example—how would I curate her experience to guide her through it gently. How could I manage her expectations, what warnings would I give her in advance? It’s really moving from an intellectual intelligence to an emotional intelligence.

That sounds a lot like in journalism school, we were told to write as if our audience had only a middle-school level of education—to make it accessible for a wide intellectual audience. It sort of sounds like with VR, you do the same, but with a wider emotional audience.

Exactly! To really immerse your audience in VR, you have to think about story doing rather than storytelling.

Developing diversity in the VR industry 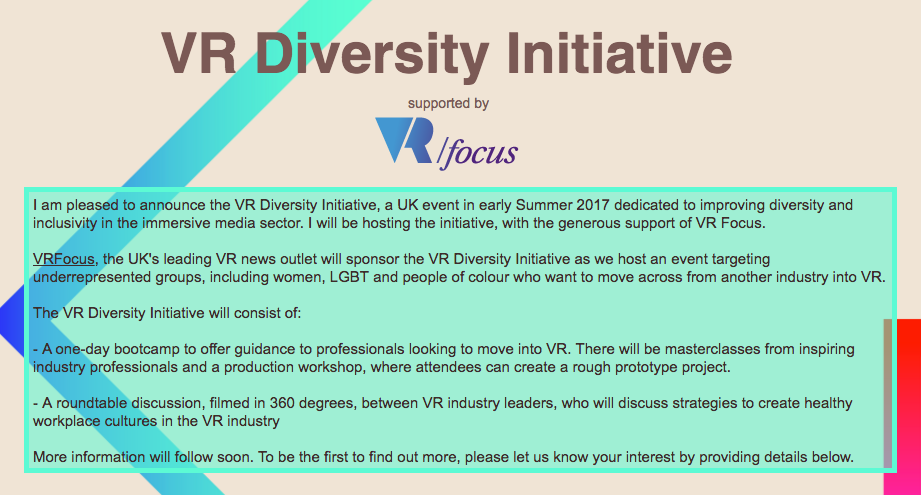 Another of your initiatives is to establish a more diverse industry at the outset. How would you characterize the current state of the industry in this regard, and what can we be doing better or differently?

I think this is part of weathering the storm of moral panic, having a diverse team that’s representative of the population. You’ll have a wider variety of experiences and feedback for your experiences.

I read on your website that you tend to center your practice around work for audiences who aren’t generally considered early adopters, like the BBC’s No Small Talk aimed at millennial women. Why have you decided to approach your content creation in this way?

I suppose that’s for two reasons. One is commercial, thinking about the future of the industry. If we don’t hit mainstream audiences and don’t move it along that adoption curve, it will never grow to the state that analysts have said it will. The second is ethical. It makes ethical sense to expand the industry to include a wide range of voices AND content that speaks to a wide range of audiences.

Can you talk a bit about the VR Diversity Initiative that you’ll be hosting later this summer? Will the boot camp hope to pull in less represented groups to the industry?

Now is the time for actions, and not just words alone. That’s why VR Focus is funding the VR Diversity Initiative to improve diversity and inclusivity in the immersive media sector.

Our goal is to get underrepresented groups interested in the VR industry. There’s very little career advice online—so little signposting of what the industry is like and how to get into it. This is a way in. We’re opening applications for it soon, and it’ll hopefully attract some potential leaders into the industry.

Catherine Allen’s vision of the future of VR

What do you think is the biggest challenge facing immersive content producers today?

Distribution! Getting your work in front of audiences. We’re moving into a phase now where our work as a community is ready—it’s getting really good—now we need to get it out there. My hunch is a lot of it is going to be physical distribution in locations: museums, libraries, performance venues. That solves the problem of giving the audience the very best VR experiences and will help expand their perception of what VR is capable of being. 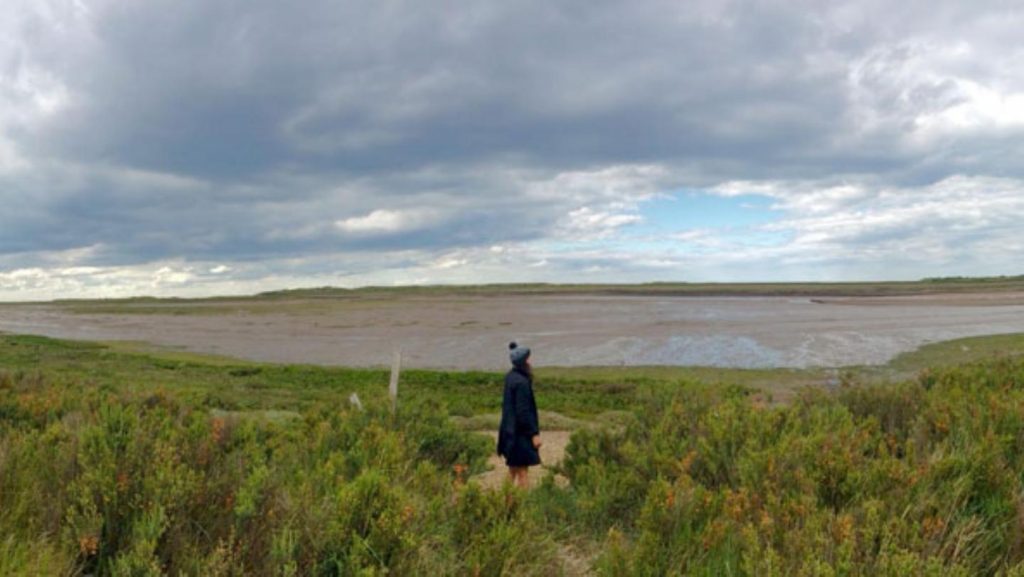 What is your favorite VR experience?

I think it’s impossible to pick a favorite, and people should watch as much as they can, but one I would definitely recommend watching is the piece that’s going to be our finale show at Watershed in June, Natural Reality 2:1. That piece shows something new about VR, how it can be a reflective space, a space to think about your relationship with nature and technology.

What are your predictions of where the industry will be in 1 year, 5 years, 10 years?

I think VR as home entertainment won’t move as fast as some analysts think. Things can move exponentially in terms of technical capabilities, but our culture doesn’t move that fast. You still have to strap this weird thing to your face, suspend disbelief, give up your sight and your hearing. Losing our real world senses is an odd thing. It’s going to takeIndividual instance of a shot; a take = each time the camera is started and stopped. longer for that to feel like normal behavior.

I think in the next five years, VR entertainment as a cultural event or an evening out will grow. In 10 years, I think we’re looking at it becoming normal for everyone to have a headset—or whatever that might look like—at home.