This week, Immersive Shooter sat down with Sarah Hill, the CEO and Chief Storyteller at StoryUP, to talk about StoryUP’s big goal of balancing today’s media diet, what she’s learned about crafting a successful immersive story and–of course–what’s in her gear bag. Oh, and her best hide and seek strategies while on set. 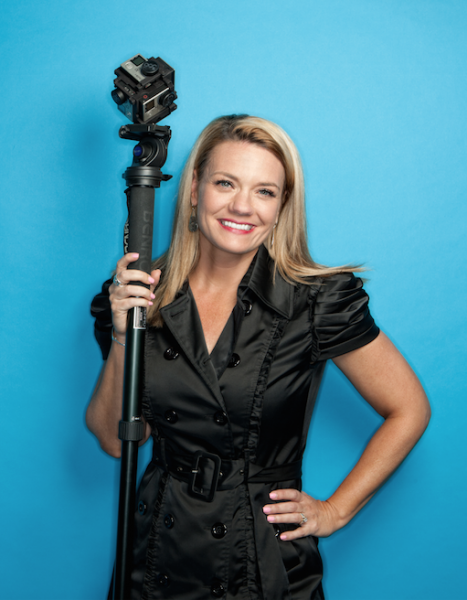 Sarah Hill is an immersive content creator based in Columbia, Missouri. Two of her works are currently being featured in the NextVR section of Marche De Film in Cannes.

Two of her immersive videos are currently being shown in the NextVR section of Marche De Film in Cannes. The one above, “Are You Listening,” shares the story of people living in energy poverty in the Congo and Amazon, and the other is an Oculus project StoryUP did for the Ad Council about implicit bias, called “See Beyond Labels.”

Prior to launching her immersive media production company in Columbia, Missouri, Sarah worked in TV, where she created award-winning flat documentaries around the world.

StoryUP also has an open seed round on its VRceuticals mindfulness platform.

About the StoryUP app

What inspired you to create StoryUP?

When we showed it to the veterans, we realized they weren’t just watching the story—they were feeling it. So, we decided to test to see what these stories do to individuals’ brainwave patterns and how we can use VR experiences to shift those patterns, particularly related to stress management. And some of those experiences were able to elicit specific brainwaves patterns. We’ve since filed a provisional patent on this methodology and, with the help of the neuromeditation institute, we are continuing to study the anterior cingulate of the brain as it relates to empathy and VR.

These experiences aren’t just meant to lift you up. Specifically, the experiences on the mindfulness tab are meant to shift brainwave patterns into a pro social emotional state. We also do advocacy journalism about charities, but that mindfulness tab is meant to reduce gamma activity in the brain. They’re written by psychologists, not just storytellers, so we’re storytelling with science.

Our content is being used in assisted living centers, chemo therapy and dialysis clinics, blood draw centers, or even a stressed out mother who needs a break—anywhere with short term stressful situations. We’ve shown some of our content to sailors aboard the USS Nimitz who don’t have the ability to see nature for months on end. We can put them in a headset and they can feel they’re in that quiet forest on a mountaintop. It’s nonfiction storytelling that’s meant to lift you up and reduce anxiety.

You’d said these stories attempt to balance the media diet. What do you mean by that, and what role does that play in the current state of the media?

We don’t call it journalism—we err more on nonfiction storytelling or little J journalism. I spent more than 20 years in TV news, night after night telling individuals about the bad things happening in the world. That’s important to the world, but can leave you with an unbalanced view of the world and a feeling that everything is going to heck in a hand basket.

You need that part of your diet just like you need vegetables, but the world is such a beautiful place. People help each other. People are overcoming challenges. There are stories in this world that can balance out the negativity you hear from other places. Is it all butterflies and rainbows? Yes! Guilty as charged. We all need some butterflies and rainbows, so we created that place where you can story up.

The stories in the app are specifically designed to reduce gamma activity in the brain. For those of us not familiar with the inner workings of the brain, what recognizable benefits would that offer?

I’m not a psychologist, I’m a storyteller, but this is what I’ve learned from Dr. Jeff Tarrant, who is our expert. In stressful situations, there’s a lot of fast activity happening in your brain and that’s not always good. The stories on our mindfulness tab are meant to quiet the brain and you can see this on an EEG. The brain patterns get quieter. These experiences are affecting your physiology.

Whether or not the opposite could be true—that placing people in stressful experiences like war zones—you’d have to ask Dr. Tarrant (a licensed psychologist, educator and researcher based in Corvallis, Oregon). But, my guess would be yes—and who knows what ethical considerations that raises for journalists. What is the responsibility of that storyteller? We haven’t studied that, but it makes you wonder. Everyone regardless of the content they’re creating needs to be cognizant that these stories affect people on a whole new level. It can be wielded for positive impact, but it can also have unintentional consequences if it’s used without regard for the physical effect it has on people.

We need to ask ourselves if we should be putting these people in traumatic experiences without warning. These days, there’s a lot of content with no warning on it at all. I think we need to treat this like any other media, but with the caveat that it affects people on a deeper level.

How do you think the StoryUP app fits into the landscape of VR content at this time? And what relationship do you see, if any, between the app and immersive journalism at this time?

This is an anti-game. It’s so far away from a game. There’s no interaction and that’s a strategic choice, as some of our viewers don’t have the use of their hands. You can step inside and sit back and let the story come to you. We try our very best to guide people through those experiences, through audio and narration. These are lean back VR experiences. We hear feedback from people that they can come into the app after playing first-person shooter games and can just lean back and relax.

What’s in your gear bag?

What’s the weirdest thing you keep in your gear bag and why?

Compressed air. In hot climates, it’s given us an extra 10 minutes of shooting before a rig shuts down due to the heat. Spray it just below the lens on a GoPro rig and it’s like air conditioning for the camera.

Jaunt’s system of capture and cloud stitching is amazing. It’s the best 3D we’ve been able to capture. They’re also nice folks. Google’s Odyssey rig is also impressive 3D but difficult to carry to the top of a volcano.

I also currently have a camera crush on the Z Cam S1 because its pixel level sync and one-button deployment. In addition, I can’t give up my Freedom 360 mount six-camera GoPro rig. It’s portable and has been all over the world with us. It shoots amazing monoscopic footage despite its segmented workflow.

What do you recommend as a starter kit?

Get an Insta360 Nano if you just want to start thinking about how to create stories spherically. It works with your iPhone and you don’t have to stitch. You can also easily share it on your social channels.

Any other favorite tools that help you do what you do?

Mettle/Skybox is a must-have software if you create immersive media as it makes NadirThe bottom of the sphere. patches and lower thirds on a cube face effortless. Liquid Cinema is also great tool to reorient the sphere on the cut line but it’s not public yet.

You said the experiences on the StoryUP are “lean back” experiences that sort of guide people. But, guiding people in immersive stories is hard! What strategies do you use to guide your viewer?

The viewer is in control, not the storyteller. Unlike in the flat world, they’re viewing it in their own choice of frame. We need to use unique storytelling techniques to direct the audience’s attention.

The number one most important question you have to ask yourself is who is the camera?

What other concrete production suggestions or strategies have you learned?

Sometimes it’s okay to see a light pole in the shot. It depends on the effect you’re trying to achieve. We also hide LED lights in plants, lamps and couch cushions, in addition to on the tripod. You have to get sneaky.

We ask our interview subjects three questions and then hide when they answer and monitor the audio wirelessly. We put Post-It notes on the tripod with those three questions, in case they forget. We tell them to say “Marco” when they’re finished answering the questions, and we come out and say Polo! Otherwise, you won’t know when the interview subject has finished speaking. It sounds funny, but the Marco/Polo trick is very efficient. Anyone doing interviews from their hidey holeSlang for the spot you hide in while you are recording 360 video. knows what I mean when you’re not able to determine when the subject is finished talking when you can’t see their face or hear them speak.

Speaking of hidey holes, choose them very carefully! We’re often behind fences and rocks and we’ve had snakes, spiders, etc. come very close to where we were hiding! Once, in the Amazon, we accidentally hid on top of a giant mound of red ants. They crawled up through our clothing and started biting us. We couldn’t move or scream as we were capturing a family of mountain gorillas and we didn’t want them to charge us!

Finally, work with a small crew, as the more people you have with you, the more places you have to find for everyone to hide. We once had to cram four people into a tiny bathroom the size of a portable toilet.

Sarah Hill’s view of the future

What do you think is the biggest challenge facing immersive content producers today?

Distribution! The VR industry is crazy fragmented right now. Every headset has a different platform, so you have to size your content a bunch of different ways to get it to all these headsets. It’s made tougher by the fact that not everyone has a headset and that’s a barrier to entry. Also, the revenue streams still aren’t very developed. But it’s still the early days. “Early days” is the most overused term in VR, followed by “empathy machine”.

What is your ultimate goal for the StoryUP app, and how can our community help you reach those goals?

Our ultimate goal is to create a platform where media can be used to quiet the brain and lift spirits as an alternative to medication. So, download the StoryUP apps on iOS, Android and GearVR. Also, please takeIndividual instance of a shot; a take = each time the camera is started and stopped. a headset to someone who needs a lift. Currently, there are 125 terminally ill and aging World War II Veterans waiting for headsets. Tell a Veteran about this free program for tours of the WWII and Vietnam Memorials. Honoreverywhere.com

You can keep up with Sarah and StoryUP Studios on their website and on Medium.