After sharing a short promo video last week, Garmin has announced the details of its new Virb 360 camera.

The camera will be able to shoot a max resolutionThe number of pixels in an image, typically presented as a ratio of the total pixels on x axis to the total pixels on th... More of 5.7K, and 4K stabilized video with in-camera stitching, at 30 fps—along with 360 audio. It can also livestreamDistribute video playback in real-time. directly to YouTube or Facebook Live from within its companion app.

Marketed as “the only 360 camera for every adventure,” the camera is also waterproof to a depth of 10 meters and features G-Metrix overlays to show how high, fast or far the user went with the Virb 360.

The camera starts recording with a single touch or by voice command (OK, Garmin. Start recording.)

The camera has a one-hour battery life and can also capture 15 MP photos, including bursts and timelapses.

Garmin shared a playlist of sample videos from the Virb 360, showing adventures from kayaking and ziplining, to mountain biking and base jumping.

The videos show off the Virb’s stabilization technology, which you can see in this short clip below from its playlist, as well as its sophisticated in-camera stitching.

And, I have to admit, it was kind of hard to find the stitch line on these videos: partially because all of the cameras are moving swiftly as they capture these particular samples and it’s a bit difficult to keep up, but also because the stitching looks really, really good (despite the motion). I had to keep looking at the sky for differing exposures to identify the stitch linesThe seams in a 360° video where footage from one camera has been combined with another..

Here’s one stitch line I was able to spot, at a very close distance: 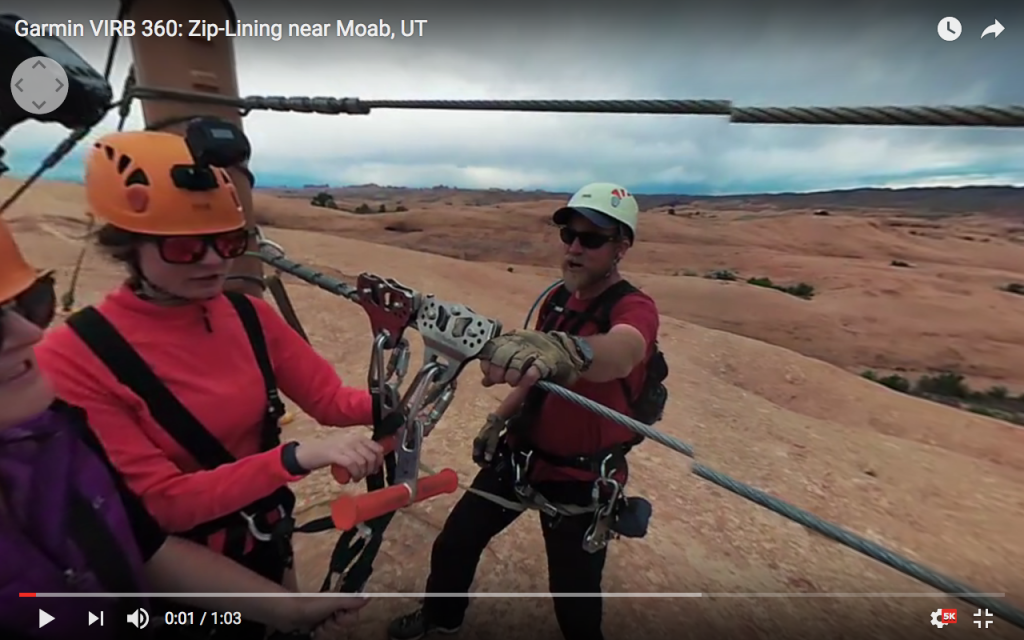 The stitch linesThe seams in a 360° video where footage from one camera has been combined with another. from Garmin’s new Virb 360 camera were very difficult to spot. Here’s one example.

The Virb 360 will cost $799 and will be available for purchase in two or three weeks.