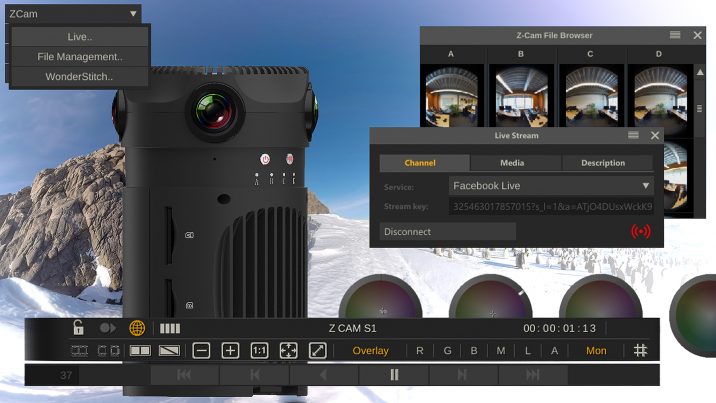 At NAB 2017, Z Cam and Assimilate announced bundling the Z Cam S1, Wonderstitch and Scratch VR Z together for an end-to-end VR production solution under $5k.

During NAB this year, Z Cam’s V1 Pro stereoscopicVideo shot with two parallel cameras (or in the case of 360° video, multiple pairs of parallel cameras) Commonly referr... More 360 camera might have been the shiny new camera in Z Cam’s booth, but the Z Cam S1 got some special treatment, too.

It will be included as part of an end-to-end VR production workflow available now for $4,999.

The new workflow allows users to stream live from the Z Cam S1 through Scratch VR Z-Live while adding graphic, text, video and animation overlays, keying for elements like green screenA subject shot against a background of a particular shade of green so the background can be removed and replaced in post... More, and multichannel and ambisonicPertaining to audio reproduction that captures the spatial acoustic qualities of recorded sound. audio support. Scratch VR Z can also be used to preview the camera live prior to filming and manage the S1’s controls, as well as stream directly to Facebook Live 360.

The S1, which offers 4K video at 60 fps or 6K video at 30 fps, is quickly emerging as an industry favorite camera and opens up access to Z Cam’s WonderStitch software, which is now integrated with Scratch VR Z. After recording and stitching, users can continue seamlessly on with traditional editing with Scratch VR, including color grading, compositing, multichannel audio from the S1 or adding external ambisonicPertaining to audio reproduction that captures the spatial acoustic qualities of recorded sound. sound, finishing and publishing to a variety of platforms

The bundle will be available within 30 days of ordering and is priced at $4,999. It includes the Z Cam S1 camera, lens protector, battery, power adapter unit and connection cables, a license to WonderStitch, and a license for Scratch VR Z with one year of support and updates.

“To date, developing VR experiences has been about the technology, not the creation of content,” said Jeff Edson, CEO at Assimilate. “And the market has been fragmented by a complex mix of cameras and software tools that often results in hours of frustration. By partnering with Z CAM to develop and deliver the first integrated VR workflow, we’ve eliminated the hassles of working in a new technology.”

Learn more about the bundle here.