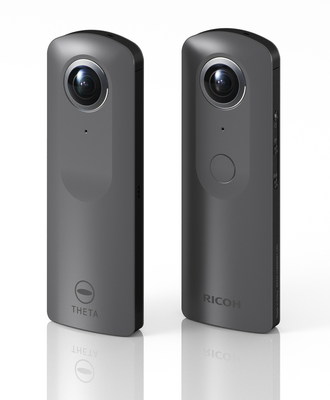 The 360 camera can not only record spherical video in 4K at 30 fps, but will also be able to live stream 4K resolutionThe number of pixels in an image, typically presented as a ratio of the total pixels on x axis to the total pixels on th... More video.

It will also have a built-in four-channel microphoneThis is a description of a microphone it goes here and it's long so that we see if it gets cut off. to record spatial surround sound audioExpected to launch later this year, the camera will be on display in booth C11139 in the Central Hall. No further timelines, specs, or prices have been announced, but this is big news from Ricoh.

Known for their affordability, ease of use, and great stitching capabilities, Ricoh Thetas have long been an industry favorite. But, they’ve needed an update to keep up with new competition, including the Insta360 Air and Nano, Samsung Gear, Nikon Keymission and Kodak PixPro Orbit, among others.

The Ricoh Theta and Ricoh Theta S were among the first affordable consumer 360 cameras, launched in October 2013 and 2015, respectively.

Last October, it announced a slightly cheaper 360 camera, the Ricoh Theta SC, but featured limited improvements over the Theta S. And, at CES 2017, Ricoh announced a 360 camera called the Ricoh R which can live stream for up to 24 hours.

Hopefully Ricoh’s foray into cheaper and longer-lasting cameras will pack the latest Theta with extra benefits, in addition to the noticeable improvement in quality.

We can’t wait to see it at NAB 2017. For more information, visit Ricoh’s website.