The team at VArtisans has used the Insta360 Titan since March 2019. (Photo courtesy of VArtisans)

In late June, Insta360 began shipping its high-end 360/VR camera, the Insta360 Titan. Mark Lambert, founder of VArtisans, has been using the Insta360 Titan since March of 2019. Here, Lambert shares his experience with the new camera.

The Insta360 Titan is an eight-lens camera that uses Micro Four Thirds sensors. It’s currently the highest-resolution unibody VR camera on the market, topping out at 11K monoscopic and 10K stereoscopicVideo shot with two parallel cameras (or in the case of 360° video, multiple pairs of parallel cameras) Commonly referr... More video. The MFT sensors give Titan an edge in image quality and low-light performance. It also shoots in 10 bit, which has been a game-changer for us.

VArtisans has been filming with a beta unit of the Titan since early March and recently received our production unit. We were instantly impressed with the camera. The basic idea behind the camera was to hit a level of quality that used to only be possible with custom rigs, and bring it onto a streamlined, scalable workflow.

It has an amazing low-light response, the ability to shoot in 10 bit is a major step for 360 color grading, and improved bit rates for compressionA process of lowering overall image quality by reducing the amount of data in a file in order to make it more accessible... More (up to 180 mbps) make a huge difference in complex scenes. Because of all these issues, Titan is going with us on every project and is now the first camera we consider for use on a shoot.

Setting up the Insta360 Titan Having already filmed with the Insta360 Pro, for us the “out of the box” setupA camera position for a given scene. You might shoot more than one shot from a single set-up (wide shot and close-up). of the Titan was very familiar and painless. The button we use most on the actual camera is the power button 🙂

Actually, it’s fairly straightforward to operate, power it on, connect to Titan either via the internal WiFi or the Farsight transmitter and fire up the app on the iPad. Like all 360 cameras, the WiFi can be tricky to setupA camera position for a given scene. You might shoot more than one shot from a single set-up (wide shot and close-up). the first time but is fairly straightforward once you establish a regular order for setting up Farsight and follow it.

As far as the app, the layout is fairly straightforward and easy to operate. The app has a solid real time preview and the standard manual settings control we expect. We didn’t encounter any issues, though there are some features we’d love to see added, like being able to isolate a preview from an individual camera.

One other point I’d like to see updated on Insta360 cameras is the speed test users are required to do on the first shot with new cards. I get why they do it, but there have been times (as the moment passes) where I would love to have the option to bypass the test and takeIndividual instance of a shot; a take = each time the camera is started and stopped. the risk. Mark Lambert of VArtisans has used the Insta360 Titan since March of 2019. (Photo courtesy of VArtisans)

Though we have not extensively tested FarSight, we recently filmed a Civil War experience with Titan and had no connection issues and we were out in fields maybe 100 feet away.

As far as monitoring is concerned, we are ecstatic that they have a histogram on the screen. It’s amazing that other cameras would be missing something so necessary for setting exposureThe measurement of the brightness and range (latitude) of light being captured by the camera. Exposure is governed by ca... More. One thing that’s missing is, with our ZCams, we often film with a direct ethernet connection to our cameras and use a PC interface so that we can hookup to a Rift and get a live 360 preview of the camera. Insta360 lets you achieve the same thing with a basic smartphone-compatible HMD, but we’ve requested they give support for standalone headsets and really look forward to when they add this.

The settings check every box, except time-of-day timecodeA numerical code that identifies videos by the hour, minute, second, and frame in the format HH:MM:SS:FF (eg. 23:59:59:2... More. We generally slateA card or device positioned in front of the camera at the beginning of each shot to document all relevant shot informati... More and have each of our cameras “named” on multi camera shoots but for editors this would be a dream even if it was not 100% accurate.

Filming with the Insta360 Titan Titan is an exceptional camera due to its MFT sensors and 10 bit recording. We have been getting excellent results in low-light scenes and finding that we can recover more detail in highlight/shadow areas than with our 8 bit cameras. NoiseUndesirable variations of brightness and/or color in an image that typically occur when recording at high ISOs in digita... More levelsThe adjustable sensitivity settings of microphones. Levels are set (and changed as necessary) to best capture the vocals... More are low compared to other cameras and the higher bitrate has meant less visible compressionA process of lowering overall image quality by reducing the amount of data in a file in order to make it more accessible... More artifacts in scenes.

As the name suggests, Titan is a large camera so the safe distance is farther than smaller setups. Insta360 pegs the safe distance at 80 centimeters, though I would recommend running test shots and being conscientious of your blocking and seam placement when you’re at this distance.

We find Titan ideal for large outdoor scenes, but the form factor and lens count means it’s not the best choice for shoots in tight areas (e.g.small rooms or a car) or scenes with action very close to camera.

A lot of our shoots are monoscopic for post budget reasons or because the audience (e.g. seniors) may have issues with stereoscopicVideo shot with two parallel cameras (or in the case of 360° video, multiple pairs of parallel cameras) Commonly referr... More video. We have/will use the Titan for mono shoots, but I am also hoping that Insta360 considers taking this technology (MFT/10bit/FlowState) and putting it into a smaller monoscopic four-camera rig similar to the S1 Pro.

One feature we absolutely love is Flowstate stabilization. We do a lot of shots with cameras mounted on cars and drones. We just finished a set of test shoots with Titan for a large upcoming project and absolutely love this feature. It’s a built in gyro setupA camera position for a given scene. You might shoot more than one shot from a single set-up (wide shot and close-up). that gives great results in stabilizing bouncing car shots.

We have been using the Insta360 stitcher which supports Flowstate to generate first pass stitches that are already stabilized for the rough cut. Compared to going out to Mocha or Syntheyes (or living with unstabilized footage during the rough cut), this has been great for client review and a great time saver. We have been impressed with the results and so far have only needed to do minor tweaks to correct direction or horizon drift.

Not surprisingly since it’s running eight MFT cameras at once, Titan is power-hungry and you will likely want to pack two or more batteries for a full day of filming. For all our cameras, one thing we have done is buy a LOT of V-Mount batteries for external power, both the 95WH for travel and the 150WH ones.

You’ll need to remember to buy a special cord to go from the DTap on V-Mounts to the power connector and make sure it is “2.5 mm ID x 5.5 mm OD.” A lot of connectors people have are 2.1 mm for the center post and this isn’t the size used by Insta360 cameras.

Because of the higher bitrate and bit depth, the Titan definitely requires more SD cards to record with and consumes more space when you backup to hard drives than previous generation cameras. We generally find that bringing two to three sets of ax64GB SD cards on a shoot will last all day.

Backing up all that data is a big job for a DIT and we are currently using the Anker USB 3.0 SuperSpeed 10-Port Hub with Anker 8 in 1 USB 3.0 readers (which we found run cooler than the Transcends).

With the Titan we generally plan on generating 600 GB to 1.4 TB  of footage per day while on shoots and plan backup drives accordingly. Backing up to portable RAID’s (LaCie Rugged USB-C 4TB currently for us) is also a good idea, though for the second safety backups we tend to run out to standard 4TB portables. We generally use MistikaVR for stitching because of its advanced tools like edge point control and often with custom stitching templates generated in AutoPano Giga. Insta360 works closely with them, so Mistika’s stitch for Titan is based on manufacturer stitching libraries.

We do not use the no-stitch editing workflow for Insta360/Premiere Pro but we have recently started to use Mistika Boutique as well and are looking forward to testing their proxy workflow.

We are also looking forward to the integration of the gyro/Flowstate data into Mistika, which Insta360 tells us is already in the works. We do a lot of shots with cameras mounted on cars and drones and Flowstate is amazing. It will be great when we can integrate this directly into our Mistika workflow.

Most of our current work goes into custom Unity apps that are designed for headset viewing, which means that we are currently generating final outputs as 4k to 5.7k videos for Oculus Go/Quest, etc.

Although this does not takeIndividual instance of a shot; a take = each time the camera is started and stopped. full advantage of the 8k to 11k recorded resolutions, we generally stitch and master at higher capture resolutionThe number of pixels in an image, typically presented as a ratio of the total pixels on x axis to the total pixels on th... More, which gives us more options in sharpening/filtering, VFx work, etc.

It is also great to have higher resolutionThe number of pixels in an image, typically presented as a ratio of the total pixels on x axis to the total pixels on th... More originals as an option as headset abilities improve or for situations where a client can use Insta360’s CrystalView format (which enables viewing at 11k using their Insta360 Moment app).

The Insta360 Titan is ideal for professional 360 video production houses.

The introduction of 10 bit video in a unibody 360 is a game changer for us. The Titan projects we are currently working on have all benefited from the higher bitdepth and bitrate of this camera as well as the lower noiseUndesirable variations of brightness and/or color in an image that typically occur when recording at high ISOs in digita... More.

While you still may need other cameras for those tighter shots, it’s a great camera for 80% of our work.

Titan began shipping in late June. The price for the basic package is $14,999, including the camera, the Farsight system, a heavy-duty case, a battery, and some assorted accessories like a lens cover and adapter cables. 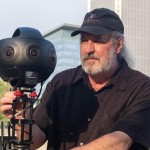 Mark Lambert is the founder of VArtisans, a production company specializing in world-class 360 video experiences. Lambert was a VFX/DFX/CG supervisor on multiple tentpole feature films (Harry Potter, Polar Express, Narnia), as well as a director, editor and software developer. More info and work examples can be found on VArtisan’s website.

See all posts by Mark