While we can debate if the VR bubble has popped, it was clear from CES 2019 that immersive technology is here to stay.

Whether via mixed reality headsets or LED Holographic fans, innovation in this space continues to mature and inch closer to the mainstream.

I spent the entirety of my quick CES trip in the South Hall, among the 3D printers, AR, VR and related booths. I wasn’t “wow’ed” by any new innovation, but I was impressed on the noticeable advancements in our expanding field.

Here are some of my highlights from CES.

Let’s start with the tech we know: Head-mounted displays.

There was no shortage of HMDs being showcased or integrated into booths, ranging from a VR rollercoaster with Oculus GOs or other obscure companies trying to make a splash.

You may have seen videos of people wearing RealMax’s AR HMD pinching and clapping as part of the gesture controls. The future looks… awkward when taken out of context.

The most notable was nreal’s light, a mixed-reality headset that had some jaw-dropping demos. While there was a long line to try out the MR tabletop experience, they had a fantastic lens demo where you could see a futuristic whale flying around a red planet in space above convention goers’ heads. 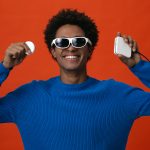 The look of the glasses aren’t great, but they are much better than, say, the Magic Leap design. I didn’t hold a pair, so I can’t attest to the light weight, but they are claiming 85 grams for the glasses, which are tethered to a small unit (known as “toast”) and paired with a controller (called “oreo”).

Also demoing was tobii, eye-tracking software that will significantly enhance HMD user-interfaces, if fully incorporated. The tech, though, goes beyond the headset and has numerous intriguing applications for hands-free environments. 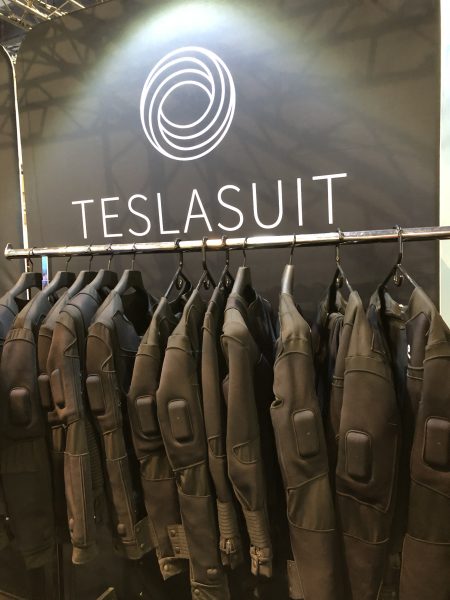 Outside of headsets, a few companies caught my eye for accessories that elevate immersion.

Perhaps it is my love for David Lynch’s 1984 Dune, but Teslasuits was demoing a full-body haptic suit, which I think is inspired by Freemen Stillsuits. I didn’t get a chance to try them out, but they looked pretty cool.
And looking “cool” isn’t something I can say about every immersive clothing: the shoes.

Another tech was from antilatency, a positional tracking system for VR. Their small sensors could convert your Oculus GO into The Void style 6-DoF experiences. Lots of potential in this space, even when you don’t have much physical space to move in.

Let’s step away from the gear and look at advancements around public/social AR displays.

While they may be limited to being the next version of neon lights, 3D hologram displays have come a long way from being a creative cosplay accessory. These devices, which I call AR LED fans, had an impressive showing throughout CES.

Several companies from around the world were showcasing the tech, but the company that made the biggest impression was HYPERVSN out of London. Their two-blade device had a much higher resolutionThe number of pixels in an image, typically presented as a ratio of the total pixels on x axis to the total pixels on th... More than its competitors and was also able to synchronize 77 fans (others have this tech too) to form a mega AR display.

There is no integrated sound yet, but this technology represents a possible solution to mainstreaming AR-like experiences without apps or additional head gear.

Another interesting demo came from headset makers, Pico, which quietly were showing their Air Light device. The overhead lamp – which has finger tracking, gesture control and more – was showcasing a table top game and some art experience. This has potential for tabletop interactive displays.

Making 3D/AR/MR happed IRL without new gear on the user is a challenge many are trying to solve and it’s great to see some progress.

There is some noticeable progress in the area of creating and producing the assets we need for immersive experiences.

Insta360 made a huge splash with their booth, demoing the company’s creative innovation in the 360 cameras space. They showcased the new Titan, as well as the new ONA X and its accessories.

Leica Geosystems has the BLK360 3D scanning imaging laser that produces some models I initially thought was just video. At around $20,000, it’s pricey but extremely high-quality solution to creating 3D models of large locations.

On the other end of the spectrum is HP’s Z 3D Camera that goes for $400-500. This scanner creates an optimized 3D model of an object you hold and rotate in front of it. (Note: I am hoping to get my hands on one to create 3D assets for mobile AR experiences.)

CES showed me that our industry is growing beyond 360 video and HMDs, diving deeper into mixed reality in all its emerging forms.

Get ready to innovate even more in 2019.