Directed by interactive filmmaker Nicole McDonald, the experience encourages the audience to extinguish lights and release them back into the sky, where they once lived as stars. Nicole previously directed Hue, a VR experience that premiered at Sundance in 2016.

We sat down with Nicole to talk about UI for interactive VR, testing out experiences and the keys to interactive storytelling.

I’ve heard that the sweet spot of VR is a mix of narrative and gaming. Where does Free the Night fit in? Is it more narrative, or more game?

I feel like Free the Night is the perfect balance of narrative and game. You can be passive or interactive. One thing I wanted to make sure of is that no one feels like they’re doing it wrong. I think people have a tendency to feel intimidated by this new medium. Like, when I first showed Hue to my parents, they got really nervous and were trying to finish really quickly, and they kept saying they were doing it wrong. I don’t want anyone to walk into my experiences and feel like they’re failing. So, I really try to draw the audience into this new world without feeling that way.

I’m trying to approach my pieces with a seamless user interface, so I ask myself, ‘How do we help people along without a big yellow arrow?’ Like in Hue, we use his shadow as a guide. In Free the Night, we added a lot of little hints. As you pass over the lights, they glow or wiggle to show you that they’re interactive. And, there are these giants that are helping you distinguish the lights as well, so they help show you what you can do so you aren’t alone. I want them to feel at ease so they can consume the story I’m telling. It’s cracking the code of interactive filmmaking.

How do you know when you’ve ‘cracked the code’? How are you testing it?

With Free the Night, we did some testing with various groups of people. Honestly, I like testing my interactive films on children, because they tend to innately know what to do. They have no perception of how something has been done in the past.

They’re innately curious and want to figure out puzzles for the fun of it. Adults have a tendency to approach a game with a scoreMusic added to enhance the mood of the video. card–am I winning or am I losing? But ideally, in an interactive film, our audience will be so immersed in the narrative and have a clear understanding of how to participate, that behavior is left behind.

With Hue, I was able to see where [the kids’] patience level ended, and that’s a great tracker of flow. I feel like how children use the experiences will unlock how to create really lush, beautiful interactive stories.

What are some approachable and effective ways immersive shooters can integrate more interactivity into their experiences?

I think we’re all working on figuring that out. We’ve been telling 2D linear stories for centuries. Both storytellers and our audience have been conditioned to consume a story that way, one that starts at A and ends at B. The balance of narrative and gaming is going to takeIndividual instance of a shot; a take = each time the camera is started and stopped. some time to refine.

I think one big one is responsivity. I do something and I get a response from that, and how does that connect to the story. Making something like an AI character is huge, but the first step is if I do something, something else happens and somehow that supports the narrative. For example, if you approach Hue in a mean way, he reacts to how you interact with him appropriately.

And also, scale. One of the pieces that really lured me into VR is Penrose Studios’ The Rose and I. I loved the scale of it, I just wanted to move around! They made getting out of my seat was so enticing. 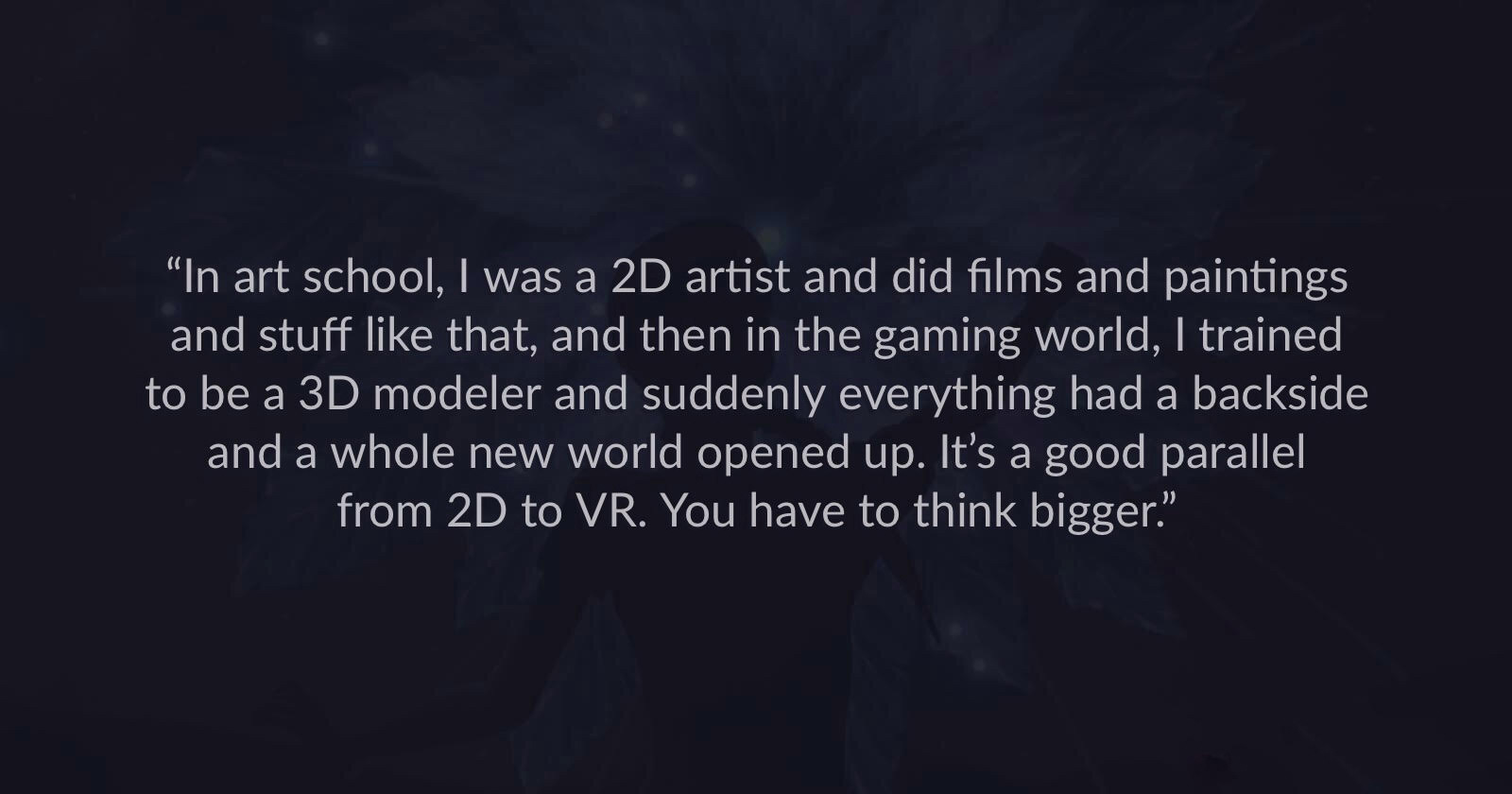 How much freedom of motion to users have? What is the 6 DoF range?

Honestly, you can move as much as the size of your play area, but the ideal play area is anywhere from a 5- to 8-foot square. A lot of it is actually vertical, getting down really low and putting your hands up really high. My hope is that people are generally curious and they can find some hidden easter eggs for trying things.

What were your main challenges moving from flat to immersive media?

I think the biggest challenge really is technology. What the technology can do right now is a bit preliminary. We don’t have as robust of a toolbox. In 2D, there’s a production process that’s been the same for a long time. You know you have to do X, Y and Z to get a piece done. With VR, you’re trying to create something new, exciting and worthwhile without a production process or the same technology support.

How did you get sucked into the world of VR?

I’ve been an interactive filmmaker for more than a decade, but I come from a games background and then went into advertising where my specialty was integrated campaigns (broadcast, print, interactive). That’s where I decided I wanted to pursue cracking the code of true interactive film. When I made Hue, it just seemed like a no-brainer to bring it into VR.

Once I saw what VR offered–this whole brand new world–it was like the culmination of every medium in one. It’s theater, it’s film, it’s games.

But, at the same time, it’s sort of like when we transitioned from Flash to HTML5. Flash (which I’ll compare to traditional film) had become so robust and then we switched to HTML5 (VR in this comparison), which felt like 10 steps behind where we left off from Flash. But, there are always incredible possibilities alongside new limitations. So, for now, it’s going to takeIndividual instance of a shot; a take = each time the camera is started and stopped. a bit of MacGuyver-ing. 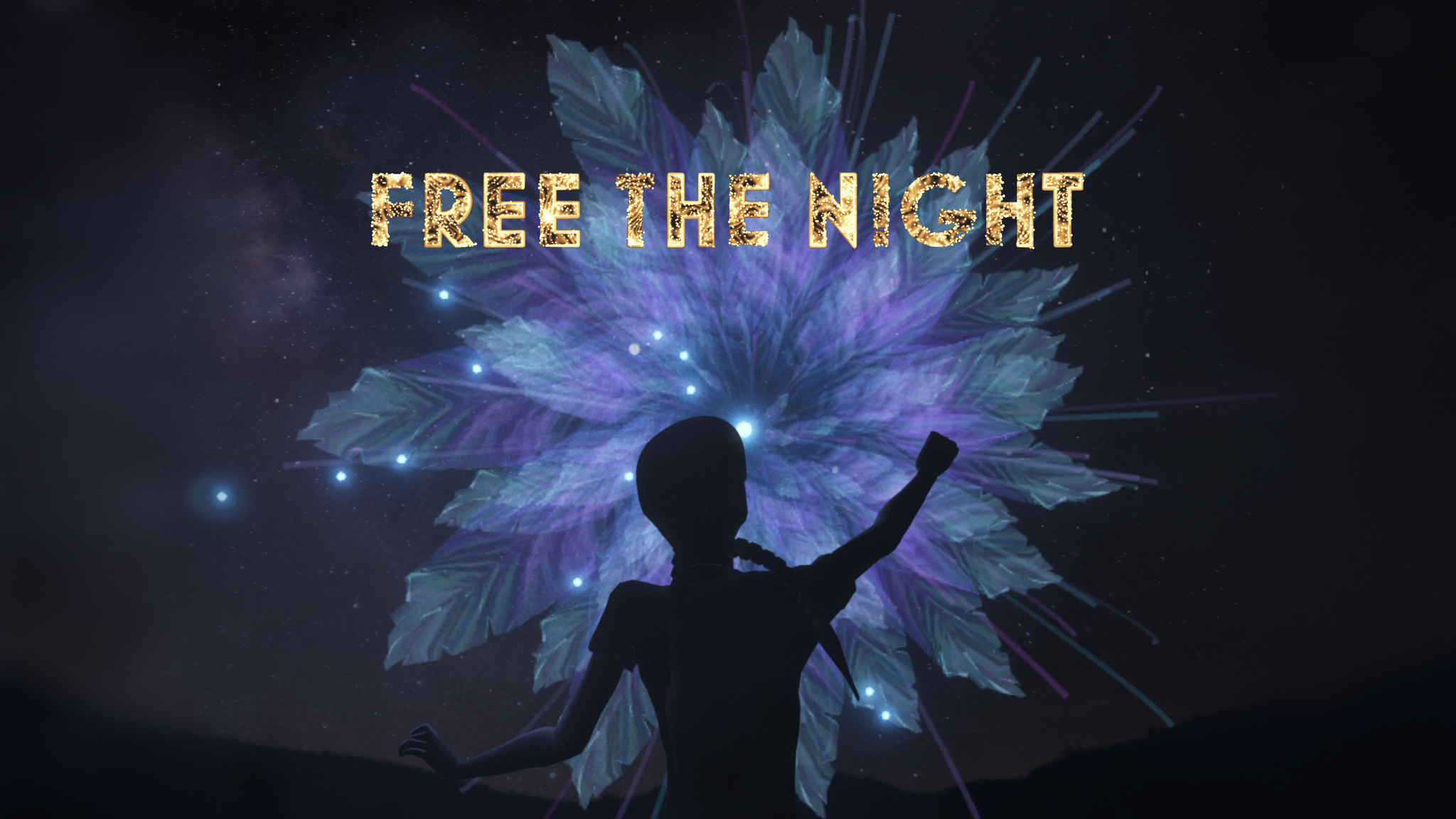 What are some of your MacGuyver tricks?

In Free the Night, it’s a story about light in darkness. But, because you can’t have that many dynamic lights on screen, we had to kind of paint with light. So, a lot of lights in the environment are actually textures, which is a really time consuming process.

Then, we had to worry about particles. Since the whole concept was about releasing these stars, we were limited by how many particles we could have, so we built a low level particle system that runs completely on the GPU so we don’t fry anyone’s computers.

It’s this crazy balance of what you imagine the scene to be and what you’re actually able to accomplish.

What VR experiences have you found most inspiring?

Zero Days. It’s about the U.S. hacking Iran’s nuclear facilities. The artwork is so beautiful, the movement is so seamless. We hear about how sound design can tell you how to feel and when, but in that piece, it’s the movement that tells you.

What will you be working on next?

Well, it isn’t a linear piece. You can do it in pieces. I don’t want to bleed anyone’s eyes out!

I’m also working on another piece about an interactive character–a dancer who is a ragdoll–and as you move her through the environment, she reveals new scenes.