You might think that the new KODAK PIXPR0 Orbit360 4K simply merges two PIXPRO SP360 4K into one, but the new camera takes a different approach–beyond just changing the color.

I am a huge fan of using two independent PIXPRO SP360 4K to capture 360, especially for use on drones. Although they are still my go-to’s for that case, it’s a hassle that you have to manually turn on and record on both cameras, so putting them into one action camera seems like a logical progression. The Orbit360 is an all-in-one device with two 20-megapixel lenses offering .

Embracing the action side of the action camera, the Orbit360 is encased in a sturdy plastic body that’s dust-proof, freeze-proof (14 degrees Fahrenheit), splash-proof (not waterproof, but its IPX5 rating is enough to handle inclement weather), and shock-proof (up to 2 meters).

But, unlike most action cameras, the Orbit360 uses two different types of lenses to add up to 360: The front is a 197° 4K Ultra Wide lens that produces a 16×9 rectangular frame, while the back lens is a 235° lens for Dome mode. Or, use both to capture a fully spherical 4K shot at 24fps.

These multiple shooting options make this camera a bit more versatile than most 360 cameras.

Like other consumer-level 360 cameras, the Orbit360 footage can be stitched in-camera and shared via the camera’s companion app. However, the Orbit 360 doesn’t have a live streaming function.

With this camera, that was a bit  more challenging than I expected.

Included in the Satellite Pack were a handful of accessories, including a selfie stick, camera mount adapters, tripod stand and carrying case, as well as charging accessories and lens protectors. It also comes with different Bluetooth remote controls, which contributes to its action camera status for users who want to mount the camera and control it with minimal hands-on time and no smartphone pairing.

When I got the Orbit360 I quickly unboxed it and took it to an evening concert at the Hollywood Bowl. The camera itself is smaller than expected, and smaller than the Nikon Keymission 360, which it’s often compared to.

Similar to the Keymission, the Orbit360’s battery, micro SD slot, HDMI and USB ports are located on the side of the camera body under a tightly-locked door. The camera doesn’t come with a micro SD card, but can support SD cards up to 256GB in size. The battery is removable and you can buy more batteries on the PIXPRO website.

The big difference between it and the Keymission? Despite not having read the manual, pairing with the app is fairly simple and recording between the different modes is a snap.

To operate the camera from your phone, you need to download the PIXPRO 360° VR Remote Viewer for iOS or Android.

Everything about launching and recording with the camera is simple. Changing between camera lenses and settings is as simple as the big red button to start recording.

Shooting with the Orbit360

The camera itself has four buttons on it and a small LCD screen to control the camera’s functions. You can also set exposureThe measurement of the brightness and range (latitude) of light being captured by the camera. Exposure is governed by ca... More compensation.

As you record, each lens has a small light to indicate which lens(es) are recording. But the feature that makes shooting with this camera stand out is its live view of what you’re shooting.

But even that isn’t without issue. The preview would appear incredibly pixelated within the app. 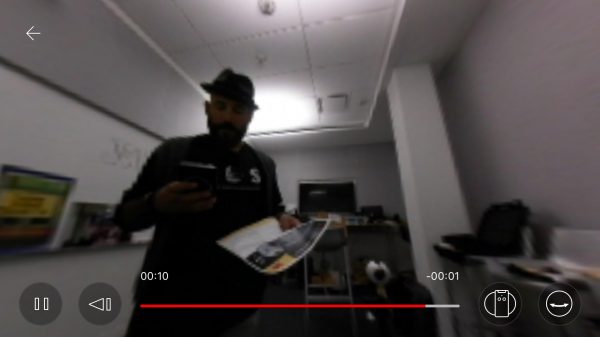 Going through the documentation and looking at videos online, I still couldn’t figure out what was happening. I knew it was capturing and recording. I know the settings were right for 4k quality video. But I couldn’t see quality results.

Luckily for me, the media contacts connected me with a camera specialist who answered my questions.

The preview quality will be very limited even when you are recording 4K video. And, according to the camera specialist, “There are some limitations when using the app, like only rendering 1 minute clips, stitch control.” They recommend stitching with the Orbit360’s desktop stitching software (more on that later).

It’s also important to keep the stitch line in mind when shooting with this camera, as it can be more obvious than other cameras. The camera has a noticeable image softening at the  stitch line, as well as difficulties balancing exposures across the two lenses. In one test the sun was on one side of the camera, making the sky color noticeably different at the stitch line. To be fair, this is a challenge for nearly all cameras at this level.

Also, the back lens can be a bit noisier than the front lens, so keep that in mind when orienting your camera.

When it comes to audio, the quality from the built-in mics on this camera is great for capturing ambient. And this camera is one of the few with a mic input jack.

Stitching with the Kodak PIXPRO Orbit360

Although you can stitch immediately (though transferring footage to your phone over WiFi can takeIndividual instance of a shot; a take = each time the camera is started and stopped. a long time), for best results use the free PIXPRO 360 VR suite for Orbit360 4K for Mac or PC, which I did.

The results were much better–on par with similar cameras. You can see it up against the Insta360 ONE and the original Samsung Gear 360 shootout we did recently. With the 72-degree overlap between the 235- and 197-degree lenses, the desktop stitching software also gives you the option to adjust the stitching position.

When stitching together, there are the basic features to merge the images, but not some needed features to improve the stitched image, like balancing exposureThe measurement of the brightness and range (latitude) of light being captured by the camera. Exposure is governed by ca... More across the stitch.

Overall, the software was not as intuitive as the app and the camera itself. Here is a step-by-step video that can guide you, but without it you might be lost. It’s about an 8-step process.

Watching this tutorial is essential:

Although I haven’t stitched footage from the Orbit360 using Kolor Autopano’s suite (I don’t have a template for this camera yet–hook me up if you’ve got one!), I imagine I would get even better results if I had used Kolor.

Final thoughts on the Orbit360

The landscape of 360 cameras continuing to grow–and quickly. In that space, every camera has its place. Despite its $500 price tag, this one seems to be a better fit for consumers wanting the best of both action camera 16:9 video and 360 videos, alongside all the accessories needed to get started.

It also has some good features, including the removable battery and micro SD card, live view of what you’re capturing, and an audio jack. But the stitching quality and app limitations are a problem.

For those focused on producing 360 videos, there are better options out there for the price–unless you need something super rugged.

The camera is definitely built to be put through the paces, but it’s the stitching that will get you.

The camera was launched in Japan in May, shipped in the U.S. in August, and expanded to Europe in September. It’s available on Kodak’s website and at B&H, with the Adventure Pack costing $499 and the Satellite Pack, $549.